Take five: “Women should lead the conversation on gender equality” 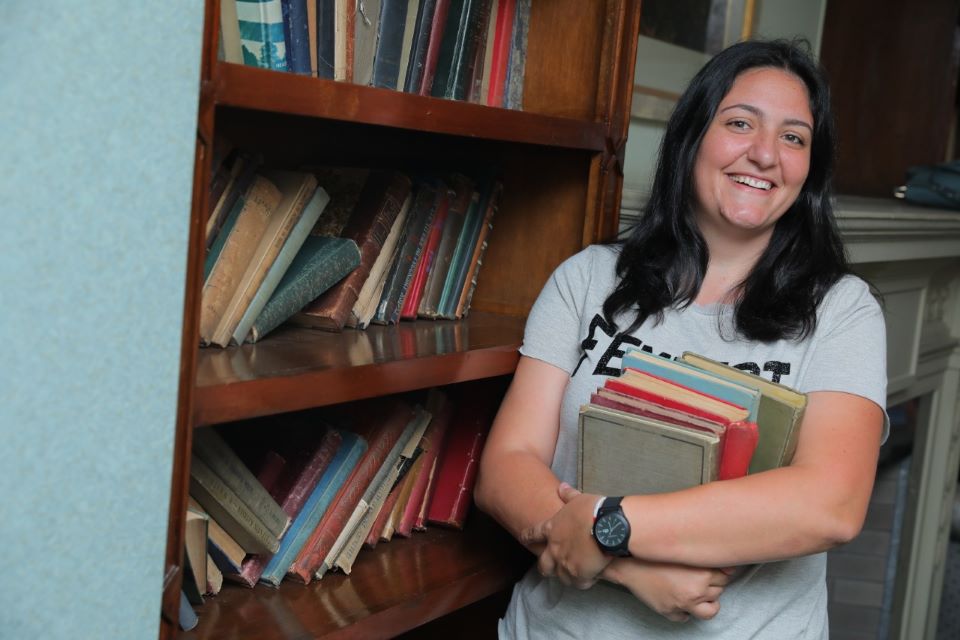 Hayat Mirshad is a 32-year-old Lebanese feminist, human rights activist and gender, communications and advocacy expert. As co-founder of the feminist collective FE-MALE in Lebanon, she advocates against discriminatory gender norms and policies and works closely with UN Women’s Men and Women for Gender Equality programme funded by the Government of Sweden. The programme works to change behaviours and social norms for gender equality in the Arab States.Mirshad is also a member of UN Women’s Gender Innovation Agoraand was recognized as one of the BBC’s 100 most inspiring and influential women of 2020 for her activism on women’s rights.In this interview, she shares her journey of fighting gender inequity and explains how to rally for wide-reaching and sustainable impact.

How did you become an advocate for women’s rights and gender equality in Lebanon?

Reading Nawal El Saadawi’s book “Woman and Sex” was a turning point in my life – experiences similar to mine confirmed my ideas about gender discrimination. As a result, I started following women’s issues in Lebanon and later volunteered at the Global Campaign for Equal Nationality Rights as a freshwoman in university, which was the foundation of my career.

Over the years, I developed my knowledge of feminism and built local, regional and international networks, as I am a strong believer in solidarity and collaboration. Working in the media enabled me to raise awareness of gender issues through mainstream and social media platforms. The more I learned about women’s daily sufferings, the more vocal I decided to be, to make sure I was really heard.

How do people around you react to your activism? What challenges do you face being a vocal feminist?

It is not easy trying to advocate for topics unwelcomed by our naturally resistant society; criticism is often aggressive and cynical. Changes associated to our value systems and traditions are even more challenging, and gender issues are often interlinked with religion and politics.

To work towards changing gender social norms in Lebanon, I started with my immediate community – which, like much of the Lebanese society, is mainly conservative. I am proud to say that my family’s views have drastically changed, and they now advocate for women’s rights within their circles. Although I’ve lost many friends throughout my journey, many others have joined the feminist movement.

In your experience, how do masculinities and social norms affect gender equality in Lebanon? What can be done to change attitudes on gender equality?

I believe that toxic masculinity is the core of the problem. Society’s perception of masculinity often leads to social dominance, misogyny, violence and even murder in some cases, with honour crimes still considered acceptable in many countries. Moreover, our laws, traditions, values, religion and society in general, provide cover for displays of toxic masculinity, adversely impacting women’s lives, rights, dignity and destiny. Unfortunately, gender-based violence had to take the lives of many Lebanese women to emphasize the urgency of domestic violence laws reform, which was finally approved last December.

When teaching advocacy, I underline the importance of overturning power dynamics simultaneously through the media, education, laws and parenting. We also need to invest in, and empower women to lead the conversation on gender equality to reclaim our rights and space within the community. Boys, men and fathers should work alongside us.

How can we strengthen cooperation across the women’s rights movement in Lebanon?

First, we need to close the inter-generational gap in the women’s rights movement by promoting dialogue, recognizing the contributions of older generations of feminists and [enabling] younger feminist voices to speak up. This is a common problem across many countries. I believe that discussions between generations of feminists and greater collaboration among us are key in strengthening the women’s rights movement in Lebanon.

Also, donors should work with Lebanese women’s organizations in defining their funding priorities and agenda, otherwise they risk playing a negative role in the movement. It is important that resources are directed towards strengthening a feminist agenda that is truly owned by us.

What do you say to young men and women who see you as a feminist role model?

I don’t believe in static role models in feminism: the feminist movement acknowledges and takes into account the achievements and contributions of previous generations of feminists, while calling on younger generations to continually expand and contextualize the women’s rights agenda based on the new realities of our globalized world.

I wouldn’t be here today, as loud as I am, without the work of the feminists that came before me. Our younger sisters can now start to advocate within their communities. I call on the younger generations to take our work further and hand over their own achievements, knowledge, and experiences to the feminists to come.

Related News
10/12/2021
Looking forward: Lebanon must place women’s rights and gender equality at the forefront of its national reform agenda
16/09/2021
Dealing with the memories of the Lebanese civil war through theatre
02/08/2021
One year after the Beirut Port explosion, women’s organizations reflect on the needs of women and girls
01/06/2021
From where I stand: “I learned to acknowledge that even though I made a mistake, this does not define me.”
04/02/2021
Press release: The United Nations in Lebanon supports women’s participation in Beirut’s Port Explosion response and recovery process
END_OF_DOCUMENT_TOKEN_TO_BE_REPLACED