From where I stand: “I learned to acknowledge that even though I made a mistake, this does not define me.” 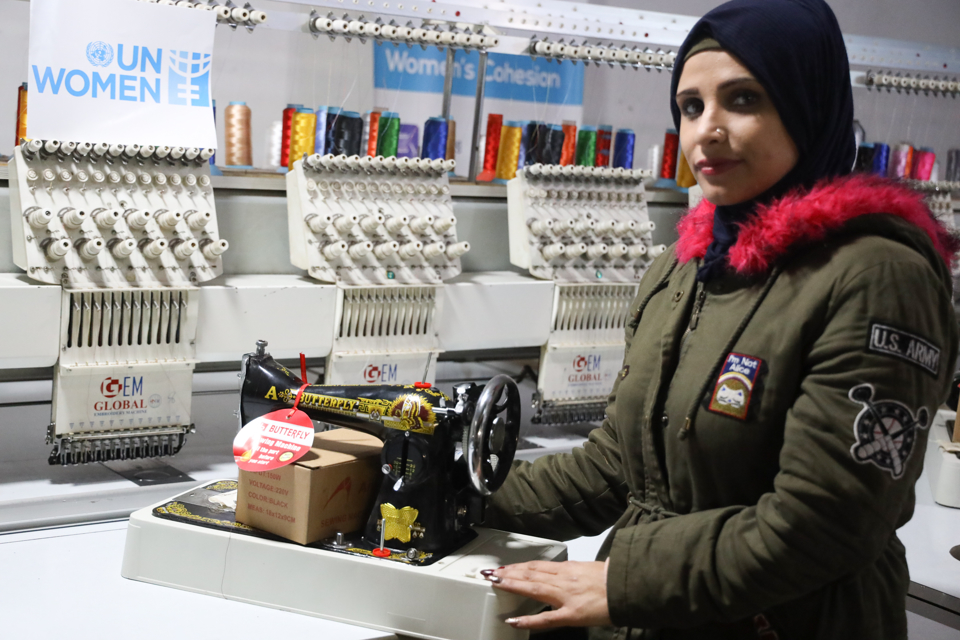 Noura Al Outa receiving a sewing machine, as part of a training programme for female prisoners and former prisoners, hosted by UN Women and the Philanthropic Lebanese Association for Reform and Rehabilitation, with support from the Government of Japan. Photo: UN Women/Dar Al Mussawir- Ramzi Haidar.

Noura Al Outa, 33 years old, expected a bleak future after serving time in prison. With support from UN Women and its partners, she now aspires to be a renowned designer.

I always loved designing, especially clothes. My favorite hobby is drawing, and I always dreamt of becoming a famous fashion designer and launching my own haute couture line. I used to run a clothing store in Tripoli to support my family of four children and my husband, who worked as a mechanic. Life was going well, until the day I was arrested and sent to prison. An employee who worked at the store used to steal from wholesalers, and I never did anything or said anything. I was in prison for 2 months on charges of witnessing theft.

Prison is hard, especially for women. It broke my confidence and who I was. I thought my life would end there; I felt like I had lost my husband and that I would never see my children again. I went from being a social and optimistic person who loved life and was always laughing, to a complete recluse.

The worst aspect was being deprived of my children, and the impact my imprisonment had on them. My children stopped going to school because of how their teachers and classmates looked at them and talked badly about our family. My imprisonment was very hard on my husband, too, but he did not abandon me. While he refused to visit me at first, he eventually found it in his heart to forgive me.

When I was released, I avoided visiting people, I felt like they did not trust me anymore. Many of our neighbors said I was a thief and were convinced I would steal again. I was depressed. I even considered illegal migration by sea to give my children the opportunity to escape my past in prison.

When I heard about the Al Jamhiyaa al Loubnaniya Al Khairiya lil Islaah Wal Taahil’s training, I thought this might be the opportunity I needed to pull myself out of my misery. I also encouraged the former inmates I knew from my time in prison to join the training.

During the training, I changed and felt a purpose. I would wake up full of life, and I would try to dress elegantly. The training taught me that life did not stop because I had been in prison. I learned to acknowledge that even though I made a mistake, it did not define me.

Thanks to this training, I am slowly returning to my old self. While I no longer feel guilty, I do worry about my 12-year-old daughter. I am afraid that my reputation would taint her future.

As part of the training, I received a sewing machine, and I started working towards my dream job of becoming a fashion designer. I am creating new dresses from old fabrics, and I have already sold a few. I would like to open my own garment factory. Even though I am only making 10,000-15,000 LBP for each sewing job, I am proud of myself, and I know this is only the beginning of something greater.”

Noura Al Outa participated in a UN Women programme catering to current as well as former female inmates in Lebanon, conducted in partnership with Tripoli-based NGO Al Jamhiyaa al Loubnaniya Al Khairiya lil Islaah Wal Taahil (The Philanthropic Lebanese Association for Reform and Rehabilitation) and made possible by the generous support of the Government of Japan.

After prison, it can be particularly challenging for women in Lebanon to restart their lives, particularly amidst the economic crisis which has seen women’s unemployment rate rise from 14.3 per cent before the crisis to 26 per cent by September 2020, according to a recent brief by UN Women.

This UN Women programme supports the rehabilitation of prisoners, and their transition from prison back into society. It includes psychosocial support sessions as well as skills-based training in sewing, and cooking. At the end of the six-month training, trainees were provided with assets, such as sewing machines, to enable them to start their own businesses.

Noura’s story illustrates the importance of achieving Sustainable Development Goal (SDG) 5 on gender equality and the empowerment of women; and SDG 10, which calls for reducing inequalities in income as well as those based on age, sex, disability, race, ethnicity, origin, religion or economic or other status.

Related News
28/03/2022
In the words of Asmaa Emam: "After receiving my national ID card, now I am able to take effective steps in my life and the lives of my children"
09/03/2022
The Embassy of Canada to Lebanon, UN Women and the Mafroukeh Play Team Mark International Women’s Day with a Roundtable on Women’s Personal Status
05/03/2022
Nadida Raad: “Let us work on creating a cycling culture in Lebanon”
05/03/2022
Trained in agriculture, women Palestinian refugees gain new confidence
05/03/2022
Myriam Ghsoub: “Thinking green leads to acting green”
END_OF_DOCUMENT_TOKEN_TO_BE_REPLACED