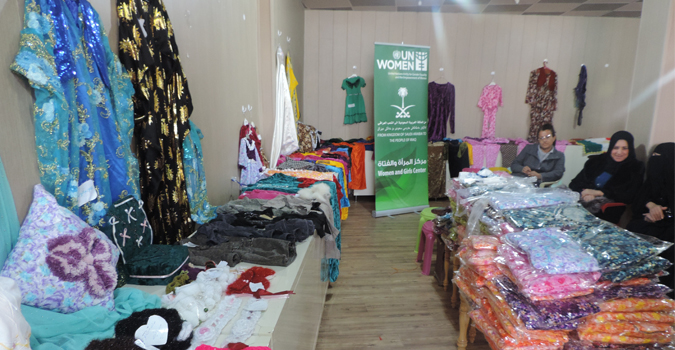 The gender gap in Iraq is widening with incidents of gender-based violence and limited participation of women and girls in significant fields. With the Millennium Development Goals (MDGs) ending in 2015 and with the onset of Post-2015 Development Agenda, Iraq will only meet its development targets when women and girls are fully integrated into development plans and targets. The Government of Iraq reiterated its commitment to achieve the targets through development of the United Nations Development Assistance Framework (UNDAF), 2015-2019 and also declared its commitment to promote more women at the leadership positions.

UN Women works with Government and other partners on enhancing women’s political participation and leadership, supporting women economic empowerment, and putting an end to all forms of violence against women towards promoting women’s rights and sustainable peace in Iraq. UN Women is also Chair of the UN Gender Task Force (GTF) and provides technical support to UN Country Team through GTF in mainstreaming gender.

Some of the key areas of support by UN Women include:

Leadership and Political Participation: The Iraqi political scene has witnessed since 2013 a number of changes at the national and regional levels. UN Women role has always been there through observing the elections process from a gender perspective and making interventions to support women leadership and enhance their political participation. Efforts have also been extended to the post-election period through setting up projects aiming at enhancing the technical capacities of the newly elected women and also to develop interest of young females in leadership and political participation through “Emerging Female Youth Leaders project implemented in cooperation with the Iraqi Council of Representatives.

Economic Empowerment of Women: UN Women considers economic empowerment of women as key to addressing violence against women and promoting gender equality. In this context, it works with the national and provincial governments on developing related legislative and policy frameworks. Aiming at enhancing the capacities of rural women in Kurdistan Region, UN Women in collaboration with UN sister agencies and the Provincial government has established a program entitled Socio-economic empowerment of rural women in Kurdistan Region

Ending violence against women and girls: UN Women collaborated and extended support to Government and CSOs and advocated for legislative reform and adoption of policies nationwide. Standardizing the draft law on protection from domestic violence in accordance with the international principles and lunching the campaign on Ending Female Genital Mutilation in Kurdistan Region are some of the areas that UN Women jointly with sister agencies have dealt with.

Women, Peace and Security: participation of women and the inclusion of gender perspectives in peace negotiations and humanitarian planning is essential to ensure that peace agreements are not narrow, are supported and sustained by nation as a whole. Iraq is the first country in the Arab region to develop a National Action Plan on SCR 1325. In this context, UN Women is also working closely with the Government of Iraq, UNAMI, and CSOs on encouraging greater participation of women in the field of peace and security in line with Iraq’s commitments under UN SCR 1325.

Governance and National Planning: In pursuit of its mandate to mainstream gender-responsive approaches into the country’s strategies and policies, UN Women has been advocating and supporting government in introducing Gender Responsive Budgeting into the country wide budgetary system. A series of trainings have been organized for officials in Baghdad and Kurdistan Region. The program is also expanded to include governorates of Najaf, Basra and Salah Al-Deen.

The year 2014 witnessed the discussion of Iraq’s report to CEDAW. UN Women has extended its technical support to the Follow up Committee that was established in October, 2014 and will continue technical support in implementation of recommendations and preparation for submission of progress report in 2016.

Humanitarian Action:  In response to the appalling humanitarian crisis in Iraq, which has made millions to flee their homes, mostly women and children, UN Women and sister agencies joined to assist the Syrian refugees and internally displaced women with a focus on women headed families through setting up income generation projects in the north and central of Iraq.

UN Women and Finland shine light on women’s local peacebuilding in the MENA region and rally support for their vital contributions to peace
Call for proposals: Strengthening the capacities of women candidates, elected women, and women leaders in CSO’s as well as women and men in senior governmental positions on WPS and women's role in peacebuilding and conflict resolution
Statement by UN Women Executive Director on the killing of Shireen Abu Akleh
First Person: Levelling the gender playing field in Jordan
Call for proposals: Promoting women’s role in peacebuilding efforts in Syria
END_OF_DOCUMENT_TOKEN_TO_BE_REPLACED