Areas of work and programmes - Yemen 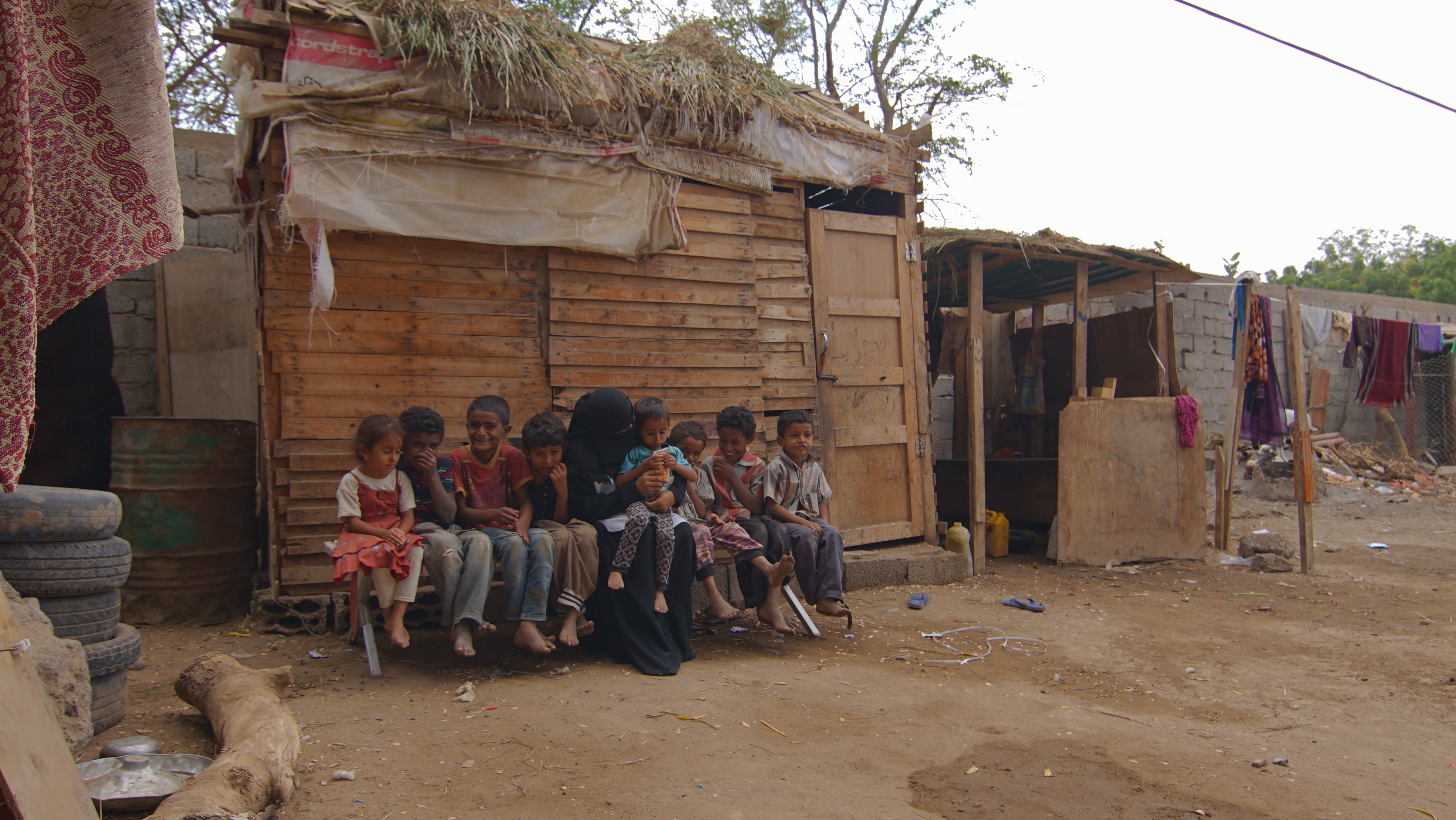 A group of children in a shelter for displaced persons in Aden – photo taken during the filming of a video for the Yemeni Women’s Pact for Peace and Security. Photo: UN Women/Abd Al-Tweel

Our strategic programming and projects

All of UN Women’s programming in Yemen is designed to support Yemeni women and girls to drive the changes they hope to see in their country, including economic, political and social changes. This work focuses on Yemeni women’s experience of conflict and their potential role in the peace processes. The current UN Women portfolio is funded in partnership with the Governments of the United Kingdom, the Netherlands and Japan, as well as the UN Peacebuilding Support Office (PBSO) and UN Women’s Fund for Gender Equality (FGE). UN Women also works closely with a number of UN agencies.

These programmes address the needs of vulnerable women and girls to ensure those affected by the crisis can participate in, are empowered by and benefit from response and recovery efforts.

A global flagship programme of UN Women, LEAP in Yemen provides livelihoods and protection services to women in six governorates (Aden, Amran, Hadhramaut, Al-Hodeidah, Ibb and Sana’a). Programming includes support for temporary shelters and skills training, cash-for-work and livelihoods support, and access to childcare services. LEAP implementing partners are the Gender and Development Studies and the Research Center at Sana’a University, the Yemeni Women’s Union (YWU), the Social Fund for Development and local authorities. This work is funded by the Government of Japan.

Responding to Humanitarian Conditions in Places of Detention

Implemented in partnership with the United Nations Children's Fund (UNICEF) and the United Nations Development Programme (UNDP), this UN Peacebuilding Support Office (PBSO) Peacebuilding Fund (PBF) pilot project aims to respond to humanitarian emergencies inside prisons and other places of detention and to improve the resilience of women and juvenile populations in these facilities. Under this initiative, UN Women supports the promotion and protection of the rights of women inmates, including the relevant international minimum standards for places of detention, particularly as they relate to women detainees and prisoners. In addition to infrastructure improvements, the project supports inmate rehabilitation with psychosocial support, legal aid, literacy and vocational training as well as enhancing the capacity of corrections staff to uphold the relevant international human rights standards. In implementing this project, UN Women works closely with local ministries and civil society partners including Penal Reform International, the YWU and the Family Counselling and Development Foundation.

Since December 2017, UN Women has funded the secondment of a Gender Advisor to UN OCHA Yemen to improve gender mainstreaming in humanitarian response efforts. This initiative is designed to strengthen the efforts of the Humanitarian Country Team (HCT) Gender Network, as well as work with gender focal points in UN agencies and inter-agency standing committee clusters to mainstream gender in humanitarian action. The Gender Advisor supports gender mainstreaming in humanitarian pool-funded projects implemented by a wide array of international and national NGOs and UN agencies.

Implemented by the Youth Leadership Development Foundation (YLDF), a leading civil society organization in Yemen, and funded through UN Women’s Trust Fund for Gender Equality (FGE), this project works to enhance Yemeni women’s leadership in political engagement by strengthening the frameworks of six political parties to support women’s leadership and gender equality in politics. As a result of the conducted activities, women in political parties formed a network of relationships with the male leaders of the seven major parties, who through meetings and workshops were able to incorporate and promote the women’s suggestions and ideas amongst other male leaders, with the aim of supporting the role and presence of women in leadership levels in the structure of political parties. As a result of the YLDF’s significant achievements, the FGE scaled up the project in 2018 to establish a Yemeni Women in Politics Network.

During 2018, the study “Legacy of Conflict in Yemen and its Impact on Women and Girls: A Nationwide Study,” was conducted in partnership with UNDP and the United Nations Population Fund (UNFPA).

This programming increases women's leadership and inclusion in peace processes and enhances gender in peacebuilding in support of UN Security Council Resolution 1325.

The Yemeni Women’s Pact for Peace and Security

The Yemeni Women’s Pact (YWP) for Peace and Security (in Arabic “Tawafuq”) is an inclusive platform for Yemeni women to organize, debate, find common ground and leverage their collective voices to call for women’s continued engagement in public decision-making. Its goals are threefold: end violence, improve living conditions, and amplify women’s inclusion in the peace process. YWP’s 60 members include women leaders representing different political parties, civil society, activists, and social activists from inside and outside of Yemen. The group is considered a consultative body for the Office of the Special Envoy of the Secretary-General for Yemen (OSESGY). This programme is funded by The Netherlands Ministry of Foreign Affairs and the UK Foreign and Commonwealth Office. 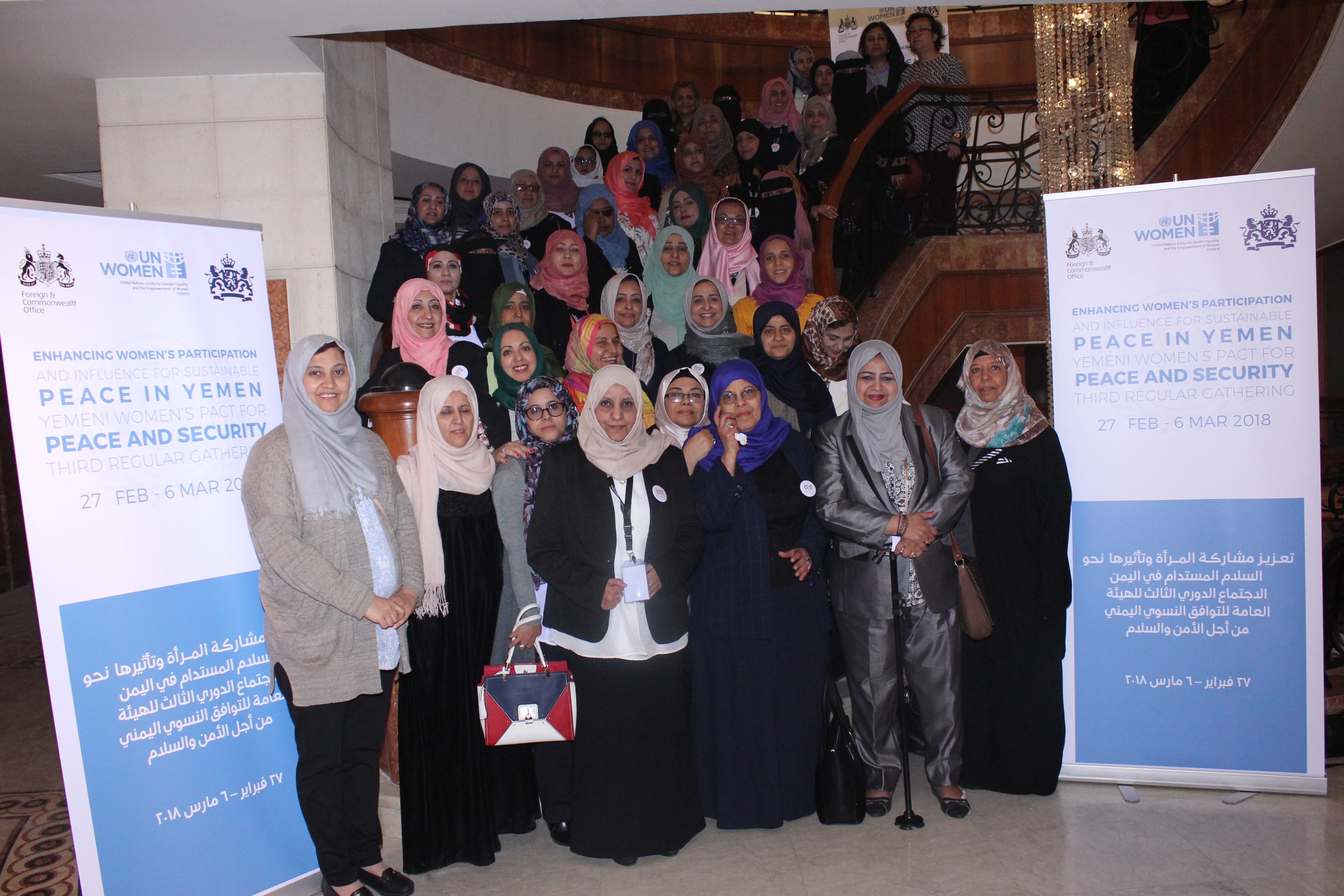 Members of the Yemeni Women’s Pact for Peace and Security pose for a group photo during an event entitled ‘Enhancing Women’s Participation and Influence for Sustainable Peace in Yemen’. Photo: UN Women/Abd Al-Tweel
news

UN Women and Finland shine light on women’s local peacebuilding in the MENA region and rally support for their vital contributions to peace
Call for proposals: Strengthening the capacities of women candidates, elected women, and women leaders in CSO’s as well as women and men in senior governmental positions on WPS and women's role in peacebuilding and conflict resolution
Statement by UN Women Executive Director on the killing of Shireen Abu Akleh
First Person: Levelling the gender playing field in Jordan
Call for proposals: Promoting women’s role in peacebuilding efforts in Syria
END_OF_DOCUMENT_TOKEN_TO_BE_REPLACED