In collaboration with the European Union (EU), UN Women organised a regional partner event to present lessons learned from its programme “Strengthening the Resilience of Syrian Women and Girls and Host Communities in Iraq, Jordan and Turkey” funded through the EU Regional Trust Fund in response to the Syria Crisis, the ‘MADAD’ fund.

Held virtually on 11 November 2020, the event aimed at taking stock of the programme’s achievements with particular focus on major global developments in gender-responsive programming. It is expected that lessons from the programme will contribute to shaping future gender equality and women’s resilience programming within the Syria response sub region.

The programme targeted both displaced Syrian women and girls and host-country nationals in the three countries of implementation through a multidimensional approach at empowering women and strengthening their resilience through access to livelihood opportunities and protection services and support to national justice structures to promote accountability for violence against women. The programme also aimed at promoting a culture of peace and co-existence through women’s leadership and engagement in peacebuilding, reconciliation and conflict prevention.

Since the inception of the programme in 2018, over 27,000 Syrian refugees and host community nationals, primarily women, have been reached, through diverse services including cash-for-work (CFW), livelihood and employability trainings, protection referrals, psycho-social counselling, legal aid, and social cohesion activities. 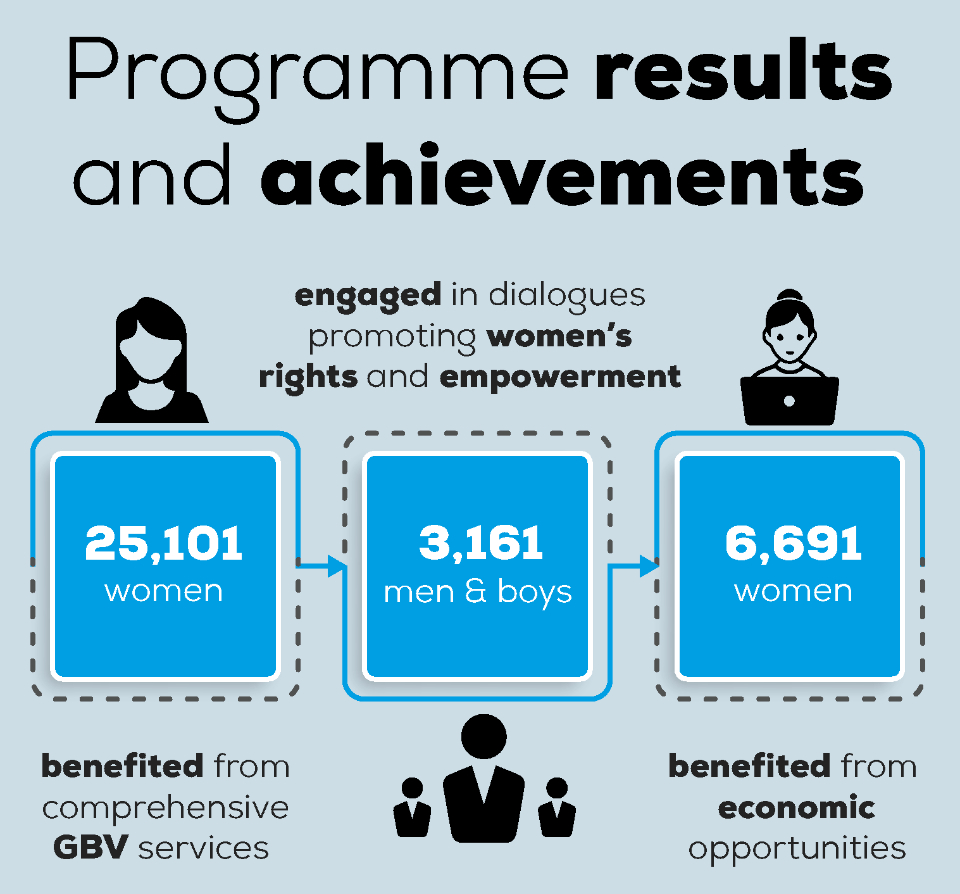 UN Women also developed a regional survey to establish a starting point against which short, medium and long-term impact of the programme activities would be measured.   The programme has also offered a wealth of knowledge and experiences, providing a successful model for synergy and coordination.

The meeting brought together 95 participants including representatives of Governments of Iraq, Jordan and Turkey, civil society, non-governmental organisations, UN agencies and donor organisations, as well as UN Women officials and key partners from the region.

“I'm speaking about moving from surviving to thriving, from assistance to self-reliance, I'm referring to job opportunities, service provisions, and of course, opportunities for women and girls to be an integral part of peace and reconciliation efforts,” said Susanne Mikhail Eldhagen, UN Women Regional Director for the Arab States.

Claudia Miller Trust Fund Manager stated, “The COVID-19 pandemic has further exacerbated the vulnerabilities women and girls are facing, in particular those affected by the Syrian crisis. Working together to give them better access to services, legal assistance and protection will not only help them personally but also untap their potential to contribute to better societies.”

“This program created women leaders and strong communities. Empowering women, gender equality and women’s rights were some of the issues that the organization depended on to implement MADAD in Iraq. The implementation required group work from the stakeholders and other partners,” said Liza Hido, President of the Baghdad Women’s Association.

“The fate of being a refugee is a temporary one. Therefore, we had to integrate Syrian women into the programmes of the EU, and this is one of the most successful initiatives to make female beneficiaries move from being volunteers to having effective roles and be able to offer services to other refugees,” said Nadia Shamruk, General Manager of the Jordanian Women’s Union.

“I started to see my aspirations and my dreams being realized on the ground in this committee. We started to widen our horizons we learned about human rights, women’s rights, gender equality, gender-based violence and the meaning of early marriage,” said Ms. Mürfet Calcul, member of the Tomorrow’s Women Committee.

“Women whether they’re refugees or members of the host community are not in the passive position of recipients of services and assistance. They are actually active drivers of development and they play a transformative role for their communities,” said Alia El-Yassir, UN Women Regional Director for Europe and Central Asia.

The event concluded with key recommendations towards achieving gender equality and women’s empowerment, which included the need to continuously respond to women’s economic vulnerabilities and protection from gender-based violence in all its forms, which has become even more essential in light of COVID-19 and the complex context of the region. Highlights and key recommendations stemming from the discussion were compiled into this outcome document.

"As we've heard today, refugee & host community women, are not just in a passive position as recipients of services and assistance. They are active drivers of development and do play a transformative role in their communities"
- @elyassir_alia, @unwomeneca Reg Dir#EUMadadFund 🇪🇺 pic.twitter.com/azZJTAsu4s

“Moving forward, we need to further build data & evidence to inform our #Syria response and ensure our programmes are based on sound analysis that considers the differential gender needs of all Syrians.”
- Susanne Mikhail, @UN_Women #ArabStates Regional Director #EUMadadFund pic.twitter.com/MKOvqatvwD

Together with #EuropeanUnion & partners, we're hosting a regional meeting to take stock of our #EUMadadFund Programme’s achievements in building the resilience of Syrian refugee and host-community women in #Iraq, #Jordan & #Turkey.

Read more about the programme here.

Related News
19/08/2021
From where I stand: “I want to leave a significant imprint in the society”
21/01/2021
In the words of Samar Muhareb: “Every woman should feel the impact of the National Action Plan on her daily life”
31/03/2019
From Where I stand: ‘We are a group of men who are ready to rise up against gender-based violence, stand up for women’s rights and spread the message to others.’
18/09/2022
From Where I Stand: “Looking forward, the most important thing for me is to keep growing and learning.”
06/07/2022
WeRise, a new mobile game app for youth to promote gender equality in the MENA region
END_OF_DOCUMENT_TOKEN_TO_BE_REPLACED