In the words of Samar Muhareb: “Every woman should feel the impact of the National Action Plan on her daily life” 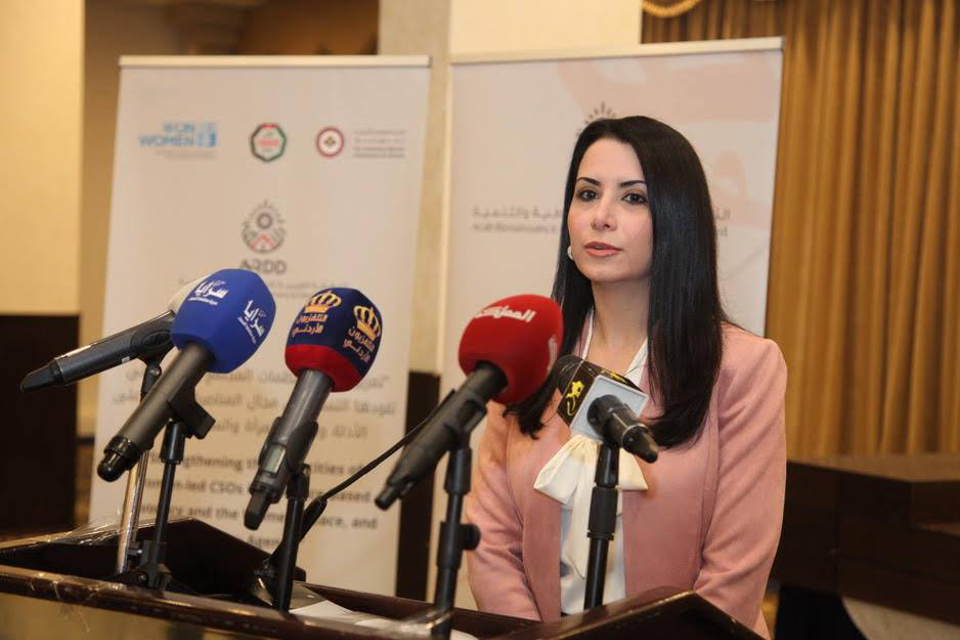 Samar Muhareb is the Chief Executive Officer of Arab Renaissance for Democracy and Development (ARDD), a Jordan-based NGO she co-founded in 2008 in response to the Iraqi refugee crisis. Through ARDD, she works to promote and protect human rights in the Arab world. ARDD is also a UN Women long-standing partner on efforts to promote the role of women and women-led organizations in building peace.

Violent extremism has generated a fair amount of global interest because of its devastating impact on individuals, communities and entire societies. In these discussions, women are usually seen as either the victims of extremist ideologies or as contributors to them. Little attention has been paid to the role of women in preventing violent extremism in Jordan particularly, and in the region as a whole. This is why at ARDD we have focused on the untapped potential of women to contribute to social cohesion and build peace in their communities and countries.

I also believe that even when women are active agents in these ideologies, more often than not it is because they are victims too. They are victims of an environment that politically, socially and economically marginalizes them. Marginalization often begets violent extremism.

Women are critical to the formation of social networks and relationships which are the building blocks of social cohesion in our societies. I believe the more closely knit this societal fabric is, the more resilient it becomes to violent extremism. Women are vital to promoting a gender-sensitive response to crisis and advancing women’s participation in peacebuilding in their communities. This is why it is essential to look into the reasons that stop women from playing such a vital role. How can we create a social, legal, political and economic environment that allows women to contribute to the prevention of violent extremism and to preserving social cohesion and peace? The Women, Peace and Security (WPS) agenda of the United Nations Security Council Resolution 1325 is one important way to enhance women’s participation in peacebuilding in their immediate surroundings. The National Action Plan (NAP) is also an excellent starting point for increasing Jordanian women’s participation in peace and security in their country. Over 40 women-led NGOs working to advance the WPS agenda in Jordan were involved in the consultation phase.

I do not believe that every woman in Jordan is expected to understand what the NAP is and how it helps her contribute to peace and security. Instead, every woman should feel the impact of the NAP on her daily life. To implement the NAP in a way that makes real change in women’s lives and makes their communities more resilient to violence, we need to work more with women-led civil society organizations that have the knowledge of women’s realities and challenges in their respective localities to shape the NAP. For example, through ARDD’s humanitarian work with Syrian refugee women over the last decade, we have learned about their needs, fears and concerns in times of crisis. We now know how refugee women often fall victim to violent extremism, recruitment and enslavement. They can also be survivors of conflict-related violence. We have heard and documented many such tragic stories. This has helped us ensure that the NAP also supports this vulnerable group and addresses their needs.

With UN Women, we have also set out to work with women-led NGOs throughout the country and ensure that they deepen their understanding of the social, economic and political drivers of violent extremism in their respective communities, on the one hand, and of the WPS agenda on the other, so they can ‘own’ the NAP in Jordan. Since then, many studies have been conducted and many initiatives have contributed to increasing social cohesion, particularly in host communities where Syrian refugees live and where competition over scarce resources can create tension and insecurity. For example, with UN Women, we have worked on an initiative in the Za’atari Refugee Camp that engaged Syrian men and boys in advocating for the elimination of gender-based violence and inequality, which is essential for social cohesion.

We have come a long way in studying what may lead to violent extremism, its impact on women and girls and their essential role in addressing it. Jordan’s National Action Plan is definitely a milestone on our path towards addressing such issues and empowering women to be builders of social cohesion. But the path is still long and requires our long-term commitment. New crises should not distract us from older ones. The COVID-19 pandemic has disrupted much of our work, but should not make us shelve our Women, Peace and Security agenda to empower women.”

This article is part of a series of features published by UN Women in the context of the global digital consultation “Voices and perspectives of civil society on the gendered dimensions of violent extremism and counterterrorism responses” (25 May to 5 July 2020). UN Women conducted a series of interviews with women human rights defenders and gender equality activists across five world regions to shed a light on the important work they carry out in contexts affected by violent extremism, on the daily challenges they face and the efforts they make to build peace in their communities.

Related News
24/02/2021
Online CSW65 side event: Gender Justice and Equality before the Law
30/10/2022
The United Nations Country Team in Bahrain builds its skills to mainstream Gender Equality and Leave No One Behind in its strategic planning for enhanced results
05/04/2022
Empowering women and girls in Jordan to build more peaceful and inclusive societies
24/03/2022
UN Women marks CSW66 with a global side event on Gender, Climate, and Security
19/01/2022
Women’s Peace and Humanitarian Fund Call for Proposal on Conflict Prevention - Re-Advertisement
END_OF_DOCUMENT_TOKEN_TO_BE_REPLACED