From where I stand: “As a taxi driver, men and women passengers would tell me that this is a man’s job, and I reply: this is a job, period.”

Golda Abu Naoum, 50, an ex-fighter from Lebanon’s civil war, can often be found weaving her taxi through the streets of Beirut, Lebanon. The 2020 port explosion triggered long standing mental health issues, including suicidal thoughts at times. After participating in a series of support sessions provided by the Restart Center for Rehabilitation of Victims of Violence and Torture, undertaken in partnership with UN Women, Golda has regained her confidence and is beginning to pursue new opportunities. 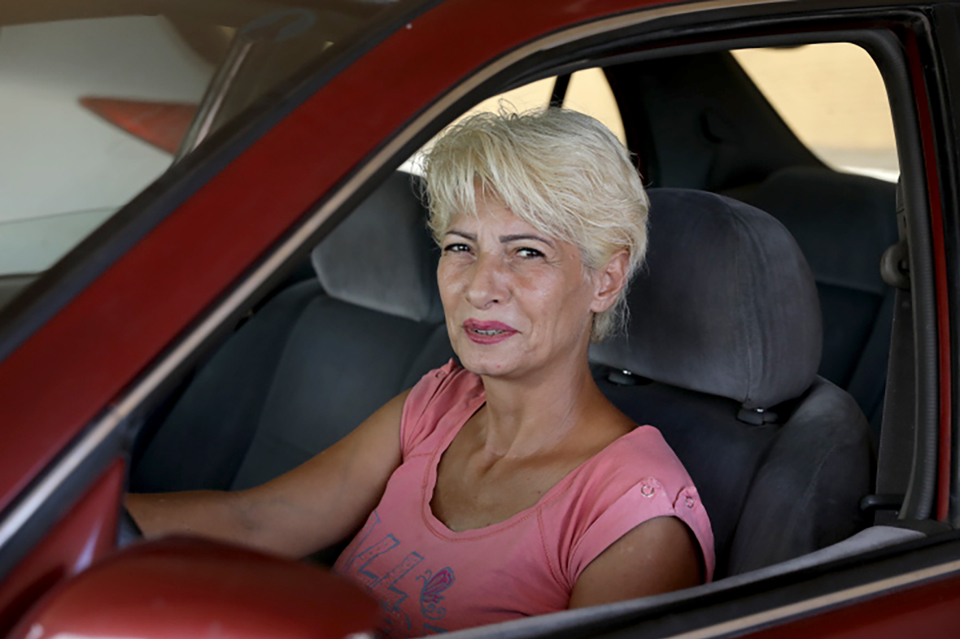 It has been 31 years since Lebanon’s civil war ended, but its psychological scars are still vivid. My family was affiliated with a political party and during the war, I joined its armed wing, as a female fighter. In 1985, my brother joined the Lebanese army but a year later he was kidnapped and then detained for eleven years. His disappearance haunted me and my family for years.

In December of 1996, just before Christmas, we received the news of his release. It still gives me goosebumps when I recall the moment, I saw my brother standing in front of me. Even though he got out, he was seriously ill and would never fully recover.

When the August 4 explosion ripped through Beirut, the glass in my home in Bourj Hammoud -3.6 km from the Port- was shattered, and my house was flooded in wastewater but luckily, my husband and children were unharmed.

The following day, I joined volunteers who were cleaning debris and rubbles from the blast.  In the Mar Mikhael area, I noticed the emergency tents established by the Restart center that were offering psycho-social support for the blast’s victims. For many of us who had already experienced the trauma of the war, the Beirut blast deeply affected us. I soon signed up to participate in the psycho-social sessions hoping they would help me.

In addition to the Beirut blast, and like many other Lebanese, the economic crisis and the COVID-19 lockdown hit my family hard. As the prices soared, the sales at my husband’s grocery shop dropped. We have been struggling to make ends meet. I have spent all of my days over the last year worrying about how to provide for my family, for my two daughters who are 12 and 14 years old and for my son who is 19. There were even moments I considered the thought of death; I just wanted to sleep and never wake up. I am scared that we might not be able to afford the food on our table. I knew I had to work but I needed a job with flexible hours to still be able to look after my family.

The psychological support provided by the Restart Centre made me realize that my life had not ended and helped me to regain the motivation I thought was lost.

It was during the sessions, that I had the idea of becoming a taxi driver. The therapist kept asking me about my hobbies and interests, and driving is a hobby of mine. As I already had a car, I only had to rent a taxi car plate to turn it into a business.

It was not easy at first. Some people would not get in my taxi because I am a woman, and it used to make me feel embarrassed. Many male taxi drivers would catcall me and tell me that: “this is a man job.” I almost gave up, but my cousin reminded me that there is nothing to be ashamed of, that this is also a woman’s job. Her words helped me to carry on.

To this day, I still get questioned by many.  Both men and women passengers tell me that this is a man’s job, and I reply: this is a job, period. Now, I have come to believe that I have the right to choose a job that I want, whatever people tell me."

Golda Abu Naoum is one of 129 women from the families of the disappeared during Lebanon’s civil war who has been supported with psycho-social and mental health care through the “Dealing with the Past” project implemented by the Restart Center for Rehabilitation of Victims of Violence and Torture, in partnership with UN Women and made possible with the generous support of the United Nations Peace Building Fund.