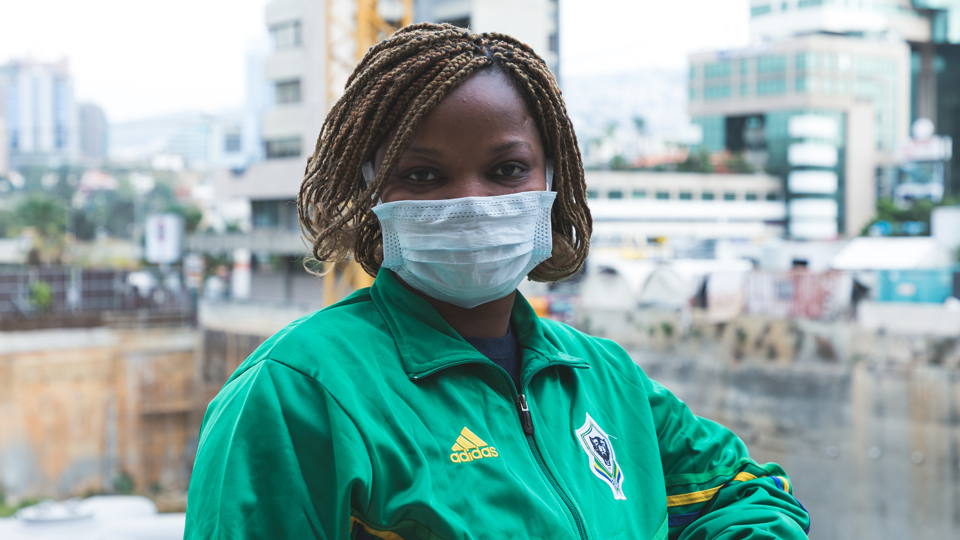 In the challenging context of the COVID-19 pandemic and the ongoing economic crisis, food prices in Lebanon have soared and become unaffordable for many. Caught in the crosshairs of multiple crises and at the mercy of an oppressive Kafala ‘sponsorship’ system, many migrant domestic workers in the country have found themselves in an impossible situation.

In search of a better life, Anne*, a Benin national, first came to Lebanon with the help of an employment agency. Unfortunately, in her first job as a domestic worker she was mistreated, and made to endure sexual and verbal harassment from the men living in the household. Unable to continue in such conditions, Anne escaped and returned to Benin. Remaining hopeful, Anne came back to Beirut soon after, changing employers several times before finally finding an employer who treated her fairly.

On her days off, Anne would often visit a community center run by Anti-Racism Movement (ARM), a Lebanese NGO—and UN Women partner—fighting racial discrimination and abuse in Beirut. The center, one of several, was designed as a place to network and build a community away from home. For Anne, the center was a space for self-improvement and for connecting with her friends. “I took English classes and we used to go on trips. I loved it, especially at Christmas,” she remembers.

The ARM centers were also intended as a space for migrant workers to come together to advocate for the abolition of the infamous “Kafala” system. Arabic for ‘sponsorship,’ kafala, which regulates the work and residency of the 250,000-300,000 domestic workers in Lebanon, has long been denounced by human rights groups as a system that allows employers to exploit and abuse workers.

Domestic workers are excluded from the Lebanese Labor Law. If a worker wishes to change their employer, they need their consent. Leaving a job without the employer’s agreement exposes workers to many risks, including detention and deportation. Those who try to escape also risk being detained in overcrowded prison conditions, where COVID-19 rates are high.

The onset of the economic crisis and the limitations imposed by kafala has also led to many domestic workers in Lebanon losing their employment, leaving them homeless, unable to cover daily living expenses, nor able to cover the cost of a flight should they wish to return home. For those who still have a job, lockdown due to the pandemic has meant little time off outside and away from the work environment in the home of their employers.

The work of domestic workers—characterized by low wages and long hours—tends to be invisible, contained within the ‘private’ family realm, leaving them often forgotten in our calls for equality,” says Rachel Dore-Weeks, Head of UN Women Lebanon. “At times this lapse is too convenient. Their work, after all, is what enables other women to meet what is an impossible bar set by patriarchal societies, allowing for the illusion to be maintained that women can ‘do it all’ and ‘have it all’ – the job, the home and the children. Rather than renegotiating with patriarchal systems and demanding more of our partners, we outsource the work to domestic workers and turn a blind eye to, or justify, labour violations. We can no longer allow this,” she added.

Just before the lockdown earlier this year, Anne heard her mother was sick and prepared to travel home. Unfortunately, by the time she made it back to Benin, her mother had passed away. After the funeral, her employer urged her to rush back before the lockdown began. Anne made it back, only to find out her employer was actually in Sudan and had been unable to re-enter Lebanon in time before lockdown. Several months later, she informed Anne she would be moving to the US permanently and thus terminated her employment contract.

Still grieving for her mother, Anne found herself unemployed in the midst of a national lockdown, having to look for a place to live and with no idea of how to sustain herself. She was able to rent a modest flat, but with the rising inflation, she was soon unable to even cover the costs of basic items like oil and food. At the start of the lockdown, ARM’s community centers, her one source of comfort and support, had to close, and Anne found herself completely isolated.

Anne’s situation was by no means unique. With so many more women in the community struggling to feed themselves and urgently needing support, ARM acted quickly to begin distributing food to migrant workers in Beirut. This work was supported by UN Women’s project “Strengthening Legal Aid and Access to Justice in Lebanon - Global Programme on Strengthening the Rule of Law and Human Rights for Sustaining Peace and Fostering Development”, funded by the Government of the Netherlands through UNDP, and in partnership with Kvinna till Kvinna Foundation (KtK).

Having been on the receiving end of the food distribution and experiencing the difference it made to her own life, Anne understands how critical it is to support people to meet their basic needs. Having her own basic needs met enabled her to give back and support her community in the same way. Today, Anne works as a volunteer for ARM, alongside fellow migrant workers, as part of the ARM Migrant Community Center member network. As a volunteer, she not only helps to distribute food baskets and support others in the community, she also shares valuable inputs with the organisation on what is most needed to support women like her. “I hope the food distribution continues and that the Migrant Community Centers can re-open soon,” she says.

*The name has been changed to protect the identity of the person.