UN Women, The European Union and The World Bank launch two reports with a focus on economic and political opportunities for all women in Lebanon 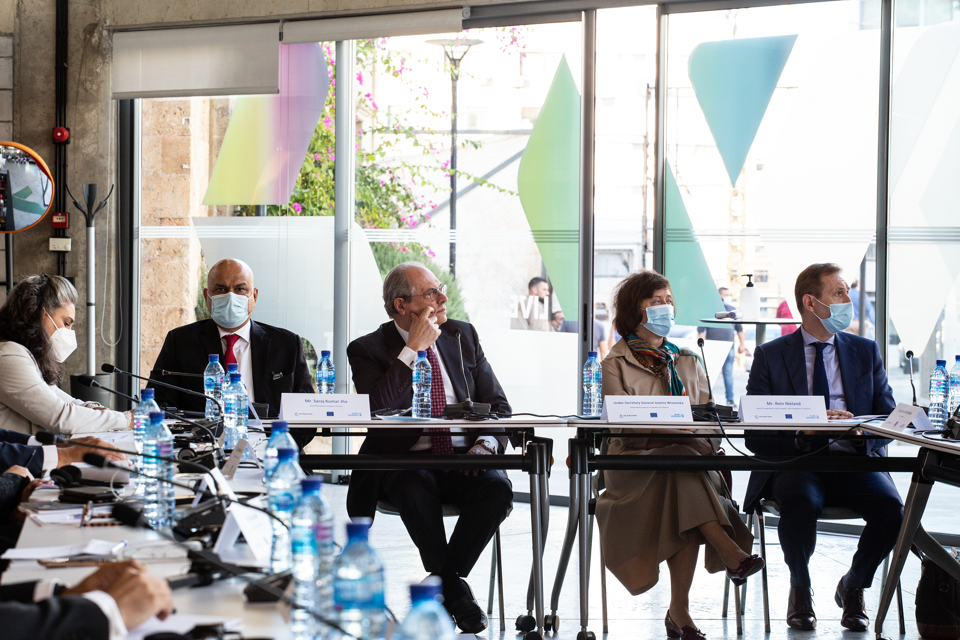 Beirut, (UN Women, The European Union and The World Bank) - Lebanon is facing a convergence of political, economic and social crises, all exacerbated by the COVID-19 pandemic. These crises are causing extraordinary human suffering across Lebanon and deepening gender inequalities and divides.

Today, UN Women, the European Union and the World Bank have come together to launch two complementary reports calling for urgent action on women’s rights and gender equality in Lebanon to prevent the loss of significant gains and rights for women.

Both reports highlight that while Lebanon has made progress on gender equality in the areas of health and education, women are still far more likely to be unemployed than men, less likely to have savings, less likely to manage businesses, and spend more than 5 hours per day on housework and childcare (more than double the amount of time spent by men on similar work). Women’s representation in formal politics in Lebanon remains amongst the lowest in the world, with extremely limited participation in the parliament, across municipal councils, and in the Ministerial Cabinet. All of these factors combined affect not only women, but the greater wellbeing of the country and the speed at which Lebanon can recover.

The discussion hosted by the three organizations gathered representatives from the Government of Lebanon – ranging from Deputy Prime Minister, the Minister of Economy and the National Commission for Lebanese Women, Ambassadors and representatives from Members States across the European Union, as well as the United States of America, Norway, Canada, and the United Kingdom, leading women and feminist actors across civil society.

“The Government of Lebanon is committed to create a more equal society where women can fully participate in the economic reform agenda. The joint efforts of all stakeholders are crucial to translate this vision into concrete actions that can help address the barriers to gender equality and allow women to realize their full economic potential for the benefit of society”  said H.E. Saade Chami, Deputy Prime Minister.

The first report, a data-driven World Bank-UN Women Lebanon Gender Assessment, The Status of Women in Lebanon: Assessing women’s access to economic opportunities, human capital accumulation & agency, notes that most women in Lebanon are jobless - with 75 percent economic inactivity among women –and that amongst those in the labour market (25 percent) unemployment is on the rise.  It finds that female-headed households are poorer than male-headed households, have less income and lower food consumption, implying that unpacking gender and household composition is critical to developing and expanding policies and programs that benefit the economic and social inclusion of women. This report was developed in partnership with UN Women and the World Bank Group’s Mashreq Gender Facility program, in collaboration with the governments of Canada and Norway.

“During times of fragility and crises, women face the heaviest toll with long term, indirect consequences on multiple levels. Despite, but also because of the current crisis, Lebanon needs more than ever before, to address gaps in women’s economic opportunities.”  said Mr. Saroj Kumar Jha, World Bank Mashreq Regional Director “The World Bank reconfirms its commitment to this crucial agenda and calls upon international partners to join hands in supporting efforts to empower Lebanese women and activate their role in society.”

The UN Women and European Union’s joint report, the European Union Sector Specific Gender Analysis: An In-Depth Sectoral Examination of Feminist and Women’s Rights Issues in Lebanon, actively builds from the aforementioned country analysis report and seeks to fill knowledge gaps by using an intersectional analysis of women’s needs in Lebanon.   It notes that discriminatory laws, particularly personal status laws, underpin the prevalence of gender-based violence by failing to provide adequate legal protections and recourse pathways for women, especially poor, migrant and LGBTIQ+ women, who are facing abuse. Digging into a range of gender equality issues, it highlights the urgent need for greater investment in women’s economic participation, women’s leadership and public and political life, strengthening protections for violence against women at within the law, society, and institutions. The report calls for significantly scaling up support to women’s rights and feminist actors across civil society. This report was commissioned by the European Union Delegation to Lebanon, as part of EU Gender Action Plan - III.

Head of the EU Cooperation in Lebanon, Mr. Rein Nieland said, “the European Union’s stands by all women in Lebanon, as the situation in the country demands targeted assistance to women in the economy and in the decision-making process. We all have a great role to play in the coming years on making that happen.”

Mrs. Claudine Aoun, President of the National Commission for Lebanese Women noted that “We are fully aware of the dangers that threaten the attainments of women in our country, especially if the crises continue escalating and if solutions are slow in coming. But we can confirm today that we noticed during the past decade evidence suggesting a positive advancement in how society views women, especially among young men and women, regarding many issues”.

Together the reports call for national and international partners to recognize the centrality of women’s rights and gender equality to all recovery and reform efforts in Lebanon and set out a roadmap of urgent actions.

Ms. Rachel Dore-Weeks, Head of UN Women Lebanon, noted that, “for Lebanon to recover and build the foundations of a stable economy and society, we must accept and put into action the realisation that the women’s rights agenda and Lebanon’s reform agenda must be the same agenda.”