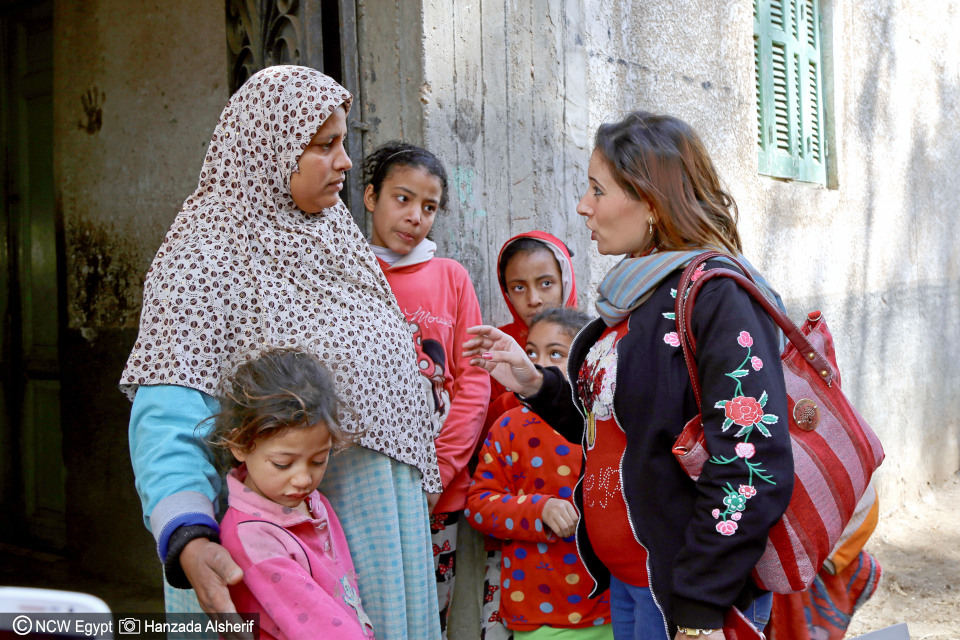 A door-knocking campaign was implemented across governorates by the NCW in order to spread awareness and end FGM. Photo: NCW Egypt/Hanzada Alsherif

According to recent data released by Egypt’s National Council for Women (NCW) and the National Council for Childhood and Motherhood (NCCM) during the 16 Days of Activism against Gender-Based Violence in 2020, the number of girls and mothers reporting actual or potential incidents of female genital mutilation (FGM) reached 1618 reports[1] between June 2019 and December 2020. In 2005, when the Child Helpline was first established, there were 240[2] reported incidents.

The rise in the number of reported cases of FGM is seen as a promising sign that the country’s efforts to raise awareness is starting to work.

“Egypt will not accept violence against women and girls. Backed by a strong political will, the government is intensifying efforts to seek parliament approval for increasing penalties on perpetrators of this crime,” says H.E. Maya Morsy, President of the NCW and Co-chair of the National Committee for Eradication of FGM. “We are reaping the fruits of two years of extensive awareness around FGM, which has led to an increased number of families and medical personnel come forward and report it.”

Egypt has a multi-layered strategy to end FGM in the country, which includes improved data on the prevalence of this harmful practice and research to understand its root causes and perceptions. This began with the Egypt Demographic and Health Survey (DHS) in 2014 and there are plans to roll out additional prevalence studies this year.

Although the DHS revealed that 92 per cent of ever-married Egyptian women aged 15–49 had undergone FGM (or cutting), there has been a noticeable decline among younger women, with rates among girls aged 15–19 dropping from 97 per cent in 1985 to 70 per cent in 2015.[3]

“When my husband and mother told me that my girl should undergo FGM, I refused,” shared Amal Ahmed*, a FGM survivor and now a mother from the Cairo governate, in an interview with UN Women. She was only 10 years old when Amal and her sister were forced to undergo FGM. The trauma of the experience never left her. Today, Amal has a 11-year-old daughter whom she protects fiercely. “I told my mother: ‘You did it to me, but I’m not doing it to my daughter. I’m not going to destroy my girl’s life.” Many Egyptian women share a similar story, which is why eliminating FGM has become a key national priority.

Contributing legislative changes include a law criminalizing FGM in 2008, strengthened penalties under the Criminal Code in 2016, and the Egyptian Cabinet just approved a bill that is now before Parliament to further increase penalties proposed by the National Committee for Eradication of FGM – to a minimum of five and a maximum of 20 years in prison for doctors or nurses who perform FGM.

The ‘National Strategy for the Empowerment of Egyptian Women 2030,’ adopted in 2017 by President Abdel Fattah Al Sisi, vows to eliminate FGM under its protection pillar. And in May 2019, the NCW and the NCCM launched a National Committee for Eliminating FGM, which includes representatives of all concerned ministries, religious and judicial bodies, civil society and development partners.

Awareness-raising has also been key, with community mobilization and grass-roots initiatives engaging civil society organizations, religious and opinion leaders. UN Women, UNFPA and other development partners contributed to a national ‘mega awareness campaign’ in June and July 2020, initially launched on the National Day to End FGM, which aimed to inform Egyptian families about the consequences of this harmful practice, including the legal penalties and official channels of reporting (including the government-managed Child Helpline and the Women’s Complaints Office helpline). The door-to-door campaign, while observing COVID-19 safety and prevention measures, reached at least 14 million Egyptian women, men and children across the country’s 27 governorates to mitigate the increased risk of FGM due to the socio-economic fallouts of the COVID-19 pandemic. It also informed the public about the fatwa [legal ruling on points of Islamic law] from the Al Azhar institution and the Coptic Church that confirm that FGM is not associated with any religion and is considered sinful. Furthermore, activities coordinated by the National Taskforce for Eradication of FGM have reached 74 million Egyptians since its establishment.

The NCW and UN Women Egypt also released their first feature film, “Between Two Seas” in 2019, with the financial support of USAID and the Government of Japan. The film tackles a number of women’s issues, including FGM, and has won 14 awards in major international film festivals. To ensure that the main messages of the film are conveyed to communities across Egypt, a series of public screenings were organized in different governorates in 2020, including Cairo, Assuit, Fayoum, Minya, Damietta, Luxor and Qena. These screenings were followed by discussions with the audience and influenced some viewers to change their mind about making their daughters undergo FGM.

“I had planned to take my 11-year-old daughter tomorrow to the doctor to perform FGM, but now that I have seen this film it has affected me and I will never do such harm to my daughter,” said 31-year-old Mahasen Kamal*, a mother and survivor of FGM, who attended one of the screenings.

While community awareness about the negative consequences of FGM is more than ever before, the practice of FGM in Egypt continues . The proposed bill on harsher penalties for FGM perpetrators now before Parliament is one of many measures that the country is rolling out. There has also been a consistent effort to mobilise men and boys to end this harmful practice, such as through the ‘Because I am a Man Campaign’ and through sport tournaments.

“We’re encouraged to see FGM reporting on the rise. It’s a sign that our advocacy is working and that legal changes are making an impact,” says UN Women Egypt Country Representative Christine Arab. “But we need to keep up this momentum. The gains made cannot be lost and we must do even more to ensure that all girls are protected from this practice going forward.”

[2] Calculation is based on figures published on the official website of the NCCM: Child Helpline 16000 (nccm-egypt.org)

Related News
01/09/2021
In the words of Mariam: “Once I had a lawyer with me, everything changed”
25/01/2021
Civil society ‘listeners’ team up with enumerators to track violence against women in Morocco
28/08/2017
In Palestine’s first One Stop Centre, women survivors of violence feel safe, protected and empowered
23/03/2022
In the words of Amr Mosaad: "My participation in the family camp on “Gender Transformative Parenting” made me realize the importance and the happiness of being with my family”
07/02/2022
National efforts continue to eliminate Female Genital Mutilation and reinforce a zero-tolerance culture
END_OF_DOCUMENT_TOKEN_TO_BE_REPLACED