Three couples in Lebanon are reshaping patriarchal roles at home

From cities to rural communities and camp settings, families in Lebanon are reshaping traditional patriarchal roles and advocating for gender equality. We take a glance at the lives of three couples who share their experiences of participatory and equal relations in all aspects of their lives including household decision-making, childcare, and domestic responsibilities.

Ahmed Moustafa and Samiha Ghimrawi: Sharing household and other duties brings them together 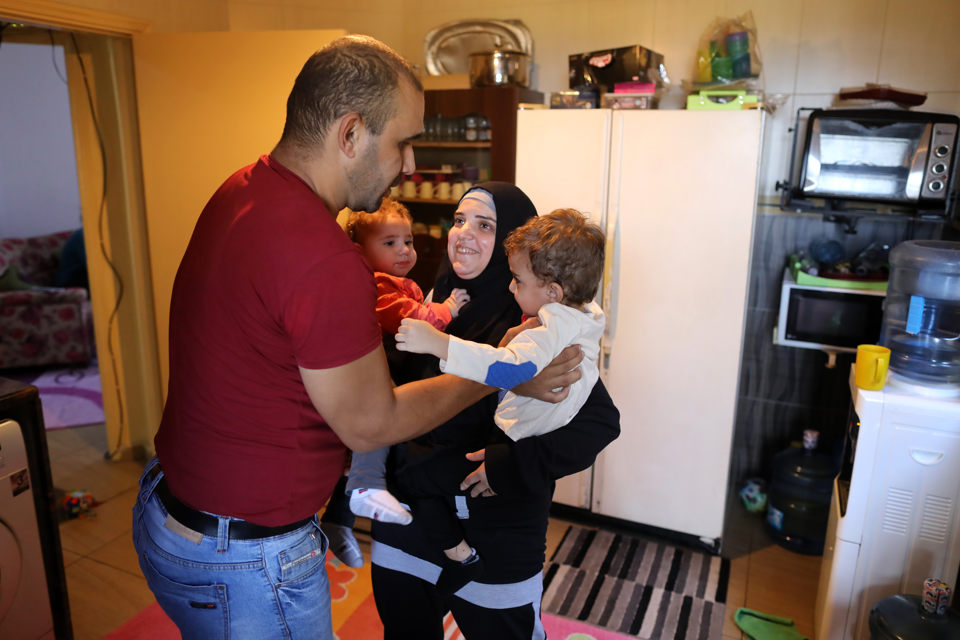 Ahmed Moustafa, 44, a school principal, and Samiha Ghimrawi, 36,a science teacher, wedfour years ago after meeting through their passion for teaching, and have a son and a daughter. The couple shares the benefits that come from equally dividing daily household duties, childcare, and their life together. "The nature of sharing is what brought us together and keeps us together," explained the couple.

In a quaint apartment tucked away in the streets of Jabal Al-Badawi in Tripoli, North of Lebanon, Ahmed busies himself in the kitchen preparing dinner for the family of four. "I find cooking fun, but my role does not end here; when I finish preparing the food, I clean the kitchen and wash the dishes." 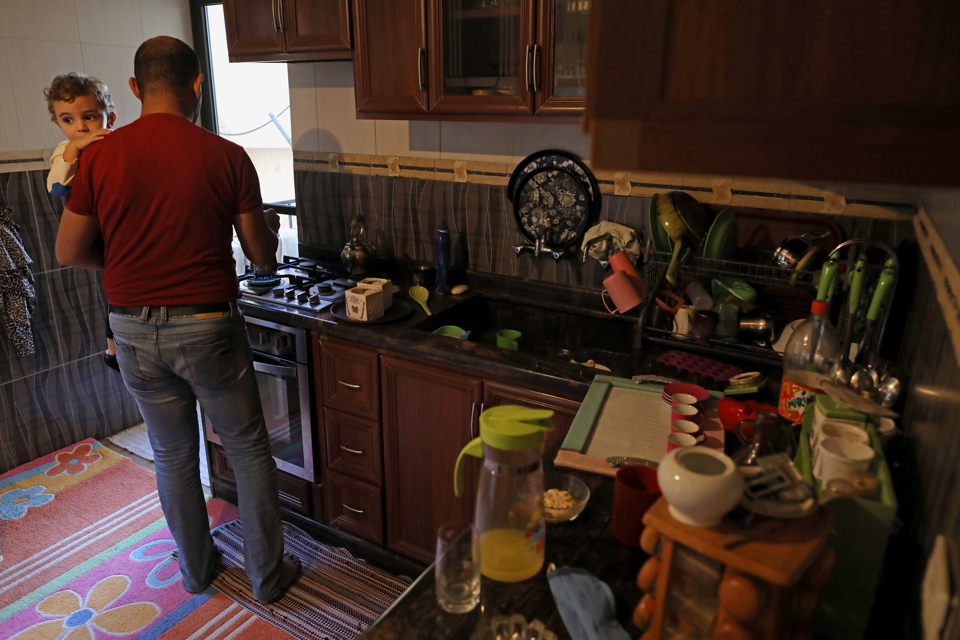 Meanwhile, Samiha takes this time to plan her class lessons for the following day. "Ahmed supports me in all household matters and gives me ample time to take care of myself and complete my work without worrying about our children or fear of falling short of the responsibilities of the home."

This support has allowed Samiha to develop her career and pursue her studies. "The support Ahmed provides at home allows me to focus on my profession without feeling strained." As a result, Samiha has completed her post-graduate studies in biochemistry and intends to continue her academic studies to complete her PhD. "Many women are forced to give up this ambition due to the stresses of home and parenting,"said Ahmed, who welcomes Samiha's ambitions.

Ahmed views education as a vital tool in changing the perceptions of his family, friends, and neighbors on the inherited traditions of society and the roles within families. Ahmed advocates for participatory relationships, using his own life as an example of what can be achieved when a husband and wife share responsibilities equally. "Many perceive household chores as a duty which a woman should undertake, it is a shameful stigma, one I wish to break through leading by example,” said Ahmed. 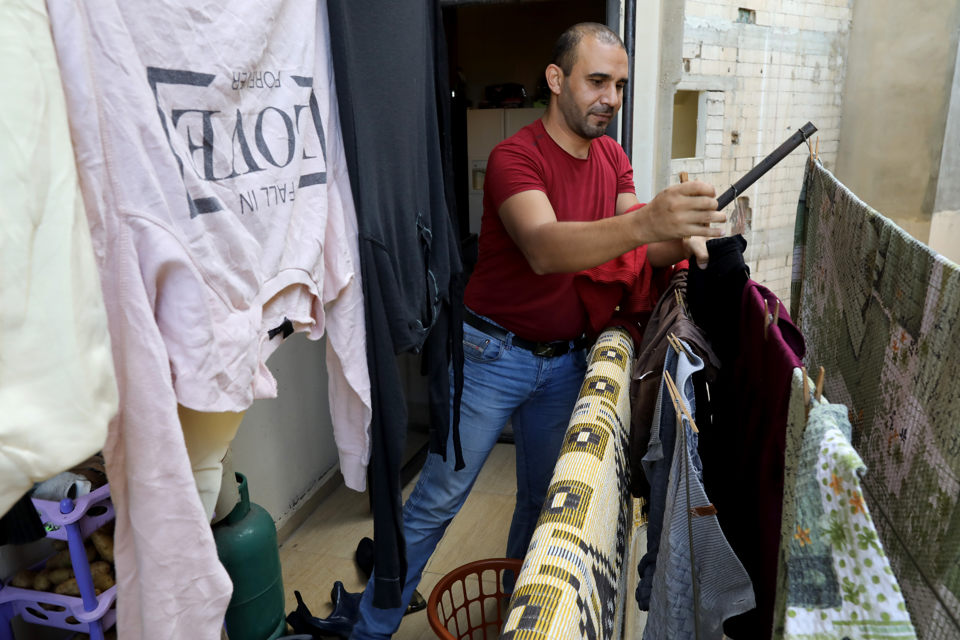 In 2017, UN Women in partnership with Promundo, ABAAD - Resource Centre for Gender Equality and Connecting Research to Development (CRD) conducted the International Men and Gender Equality Survey (IMAGES) study in Lebanon which analysed the perceptions of masculinity and the impact it has on the lives of women and girls, on men themselves, and for gender equality more broadly. The study found that for 35% of men ‘to be a man, you need to be tough,’ and 19% of men also agreed that it is “shameful when men engage in caring for children or other domestic work”.

“Some men have a misconception of what masculinity is, they believe they should be bossy or be master of his family. Although a real man, I think, is the one who pleases and comfort those close to him. I cannot consider myself a man if my wife is continuously tired," explained Ahmed. 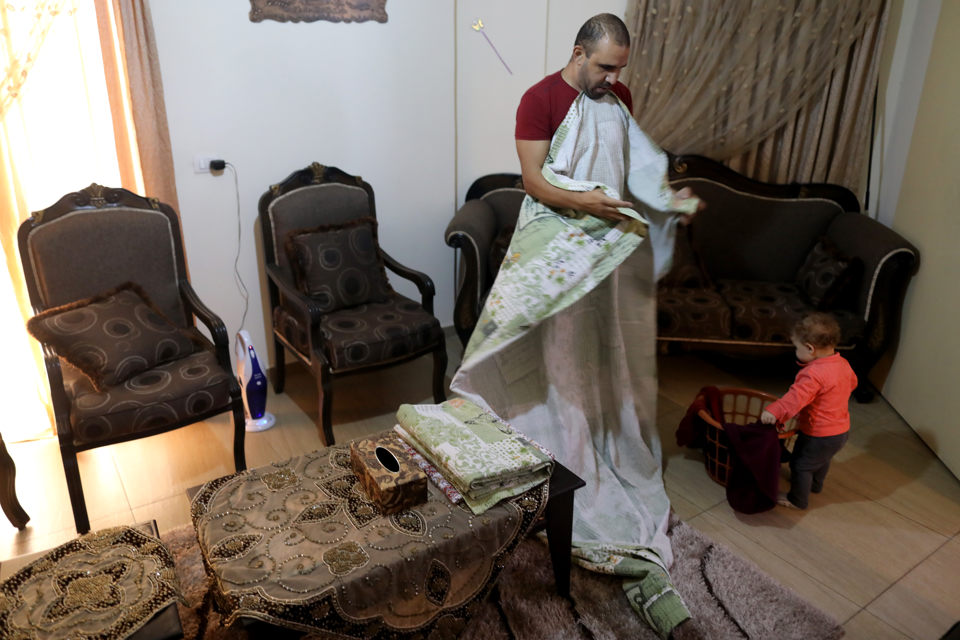 At home, Ahmed Moustafa participates in the tasks equally with his wife. Picture: UN Women/Marwan Tahtah

Ahmed and Samiha are keen to raise their children and Ahmed's two children from a previous marriage (they live with their mother but visit him often) to share the same values and instil equality into their everyday lives in and out of the home. "As long as they see me undertaking my duties, it will be reflected in them. They will learn through seeing us working together and practice it on their own," said Ahmed. "Everyone participates in the tasks equally: each of them cleans after eating and arranges their rooms."

Khaled Al-Nasr and Rania Al-Sayed: Sharing is a fundamental element of a good relationship 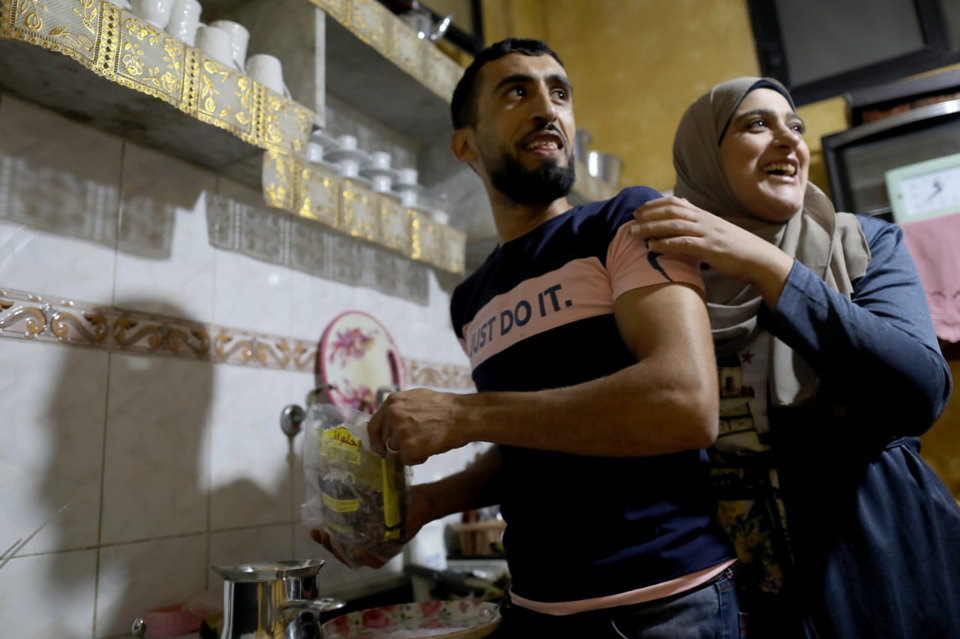 Khaled Al-Nasr, 30, a wholesale trader, and Rania Al-Sayed, 35, who works as a volunteer for the United Nations Relief and Works Agency for Palestine Refugees in the Near East (UNRWA), got married over a year ago and have a son, Walid. The couple value their relationship, and the fundamental element on which it is based: sharing all aspects of their lives.

When the couple got married, it was Khaled who made the move from Ein El-Hilweh camp in Saida, where he had spent all his life to Rashidieh camp in Tyre, (both Palestinian refugee camps), to be closer to Rania. Despite Ahmed moving, they had saved equally for their new home, and both worked in setting it up.

Their number one priority right now is their son, Walid. The couple take turns caring for him, whether it is bottle feeding during the night, childcare during work hours or the additional housework that comes with a new child. Khaled does not consider it as ‘task-splitting’, but rather a hand-in-hand partnership. “I prefer to use this description because I consider that my duty at home is equal to Rania's.” 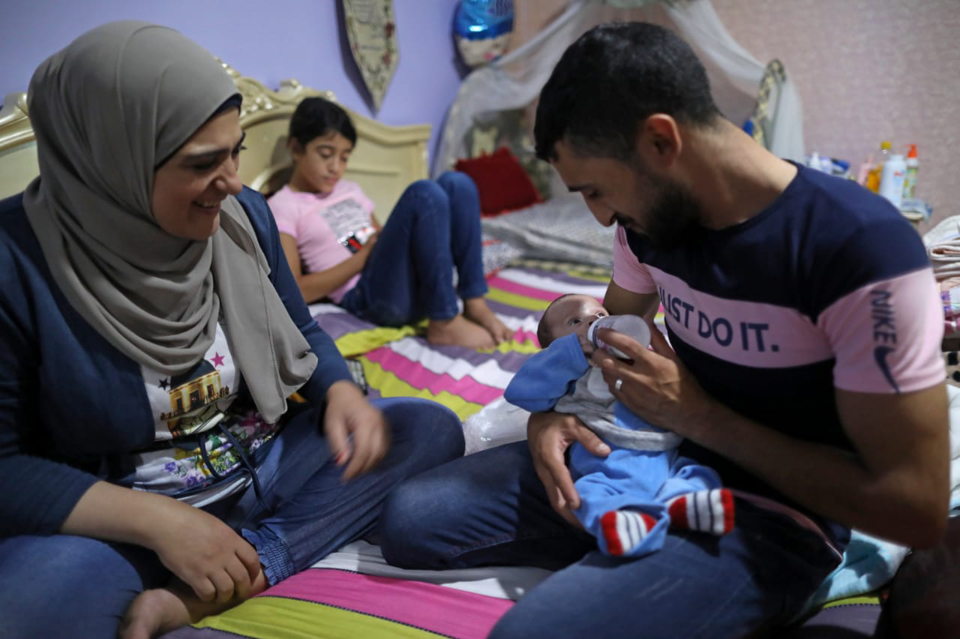 Rania’s beliefs in equal sharing does not stem from her own upbringing. She grew up in a household where girls did all the housework. "My dad worked in agriculture, and my mom used to help him at work. When she came home, other tasks awaited her—cleaning, kneading, cooking, and doing laundry without my dad’s help. I model her toughness, but I don't want to get tired early like her; my mom passed away in her forties, I think due to the accumulation of fatigue at work."

The IMAGES study shows that traditional gender divisions in domestic labour continue to be the norm, with, 85% of women reported participating in household tasks compare to 56 % of men.

Rania, and now with Khaled’s support, questions the many gender stereotypes and customs that she grew up with: "All of this never convinced me," explained Rania. “This disparity has taught me the importance of equality in all aspects of my marital life now.”

The notion of equal sharing is not common amongst most of the couples in their community, and they have often faced criticism for Khaled’s participation in household duties and Rania’s participation in decision-making. “People I know think that if a man helps his wife, she controls him and lessens his prestige,” said Rania. Khaled agreed with Rania, “I am not influenced by the norms of a society that does not recognize the importance of partnership between men and women. In any case, we do not stop because of the negative comments. My wife and I are proud of this relationship in front of everyone."

Ahmed Fakih and Douaa Affarah: Home and family, a small society for equality 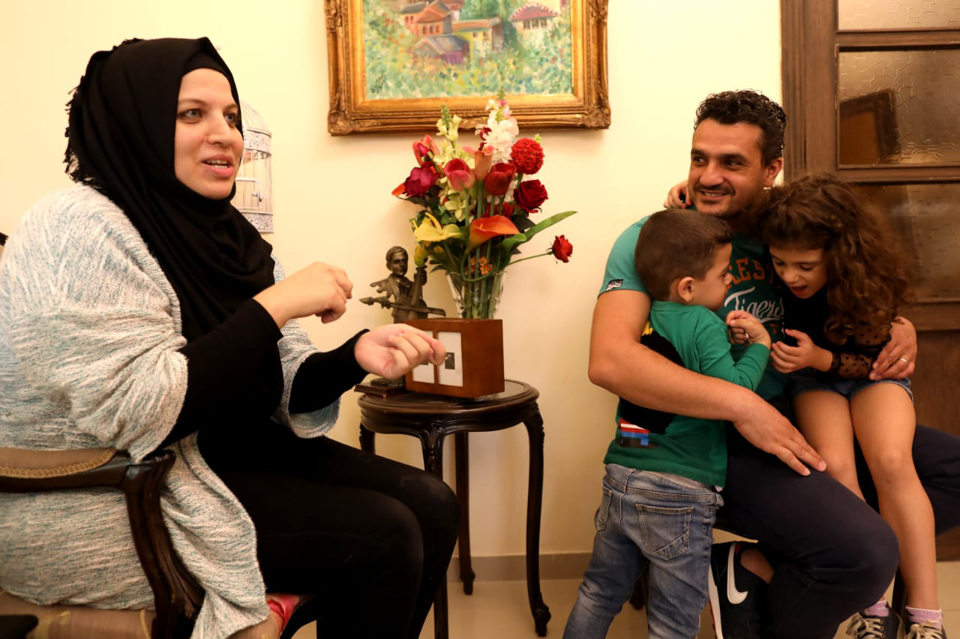 Ahmed Fakih and Douaa Affarah are bringing up their children to practice and respect gender equality. Photo: UN Women/Marwan Tahtah.

Ahmed Fakih, 38, a life skills teacher and Douaa Affarah, 31, a Business Administration student, have been married for seven years and have two children – Juri and Nasser. “Since the day of our engagement we have been fostering a small society built on equality,” explained the couple.

Although they live in a conservative society, the couple have worked hard to create a different environment and upbringing for their children, away from gender-discriminatory ideas and norms. "Marriage is an institution based on cooperation, management and participation between the wife and the husband, including for the father to have a primary role in caring just like the mother. This does not detract from his manhood and would not put him in an inferior position as some might think," Ahmed says.

As the bustle continues into the night on the streets of the Al-Fawwar neighbourhood in Saida, inside the family house calmness takes over, as the usual night-time routine is underway. Ahmed tucks his two children into bed, chooses a new bedtime story from the many he has written and begins reading softly to his children. “I began writing stories covering important, educational topics for my children since their birth. So far, I have written a series of stories with Juri and Nasser as the protagonists. More importantly, I insist on giving influential roles to women in my storytelling, such as a mother who is the heroine and a saviour, without limiting her role to housekeeping, as represented by stereotypes about women in society,” explained Ahmed. 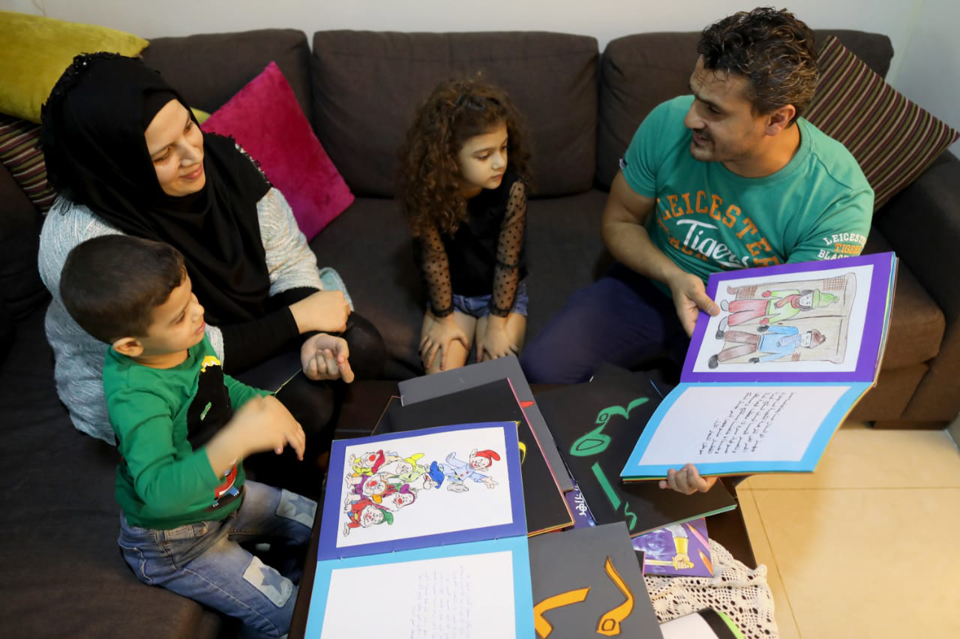 Ahmed does not miss an opportunity to advocate for gender equality during his social work at school, and in his personal time at the mosque, where he conducts activities for children. One of Ahmed’s proudest achievements was his role in advocating for the Women's Committee to join the Youth Committee in meetings at his mosque. "After a discussion with members and sheikhs, the women's body finally joined the youth body in meetings," said Ahmed. 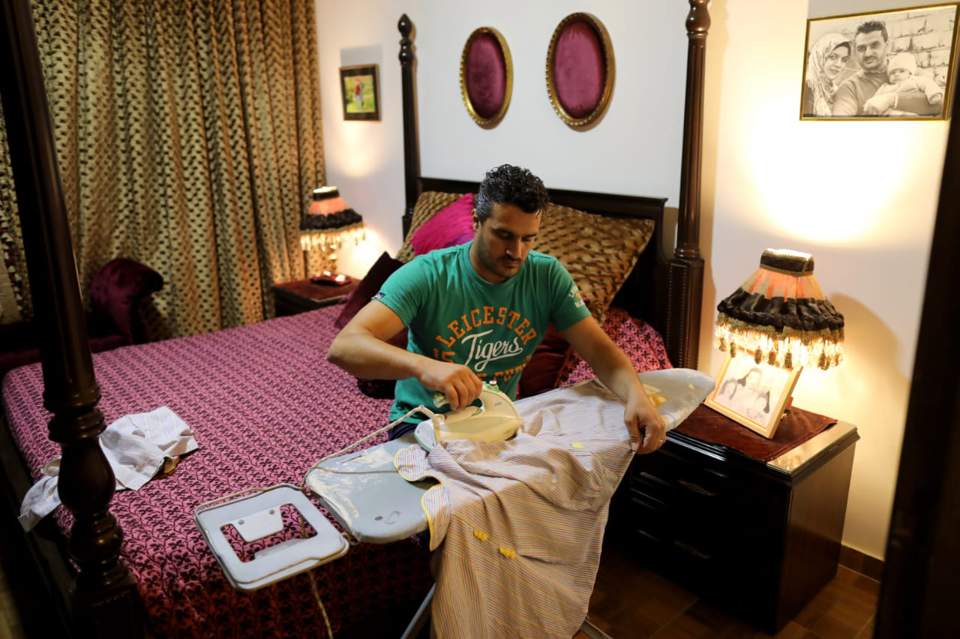 The couple both believe that change is possible through dialogue and grounding change in cultural norms and ideas. For them, the first step is within the home, creating a space that fosters the convictions they developed and cemented together, before sharing them with others. 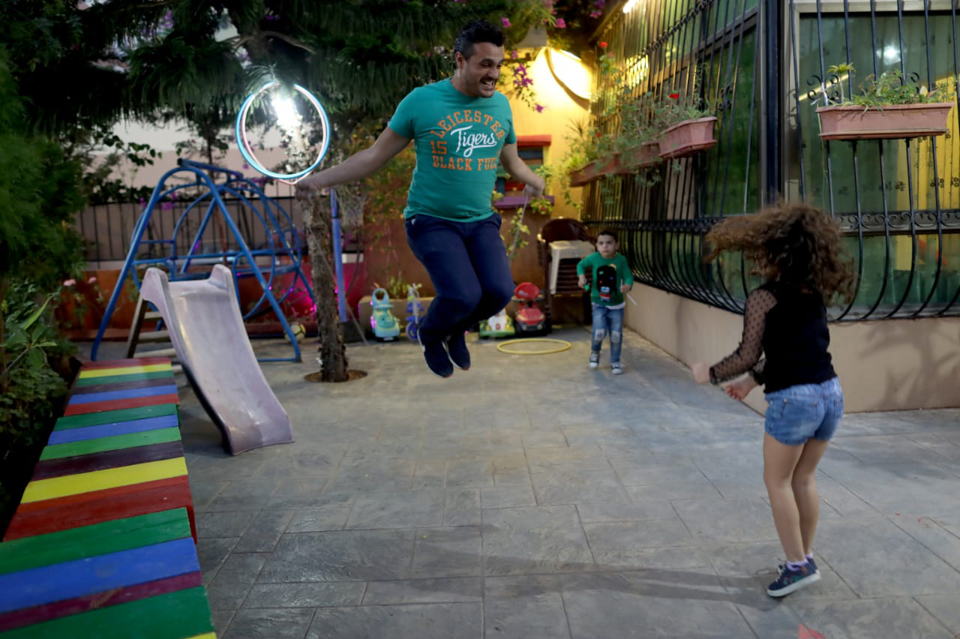 As part of UN Women’s Men and Women for Gender Equality Programme, funded by the Swedish International Development Cooperation Agency (Sida), KAFA, a feminist and secular Lebanese non-profit NGO has supported community-based  organizations in designing, implementing and executing solutions to challenge social norms and promote gender equality. Through the programme, KAFA has worked with four partners in Nabatieh, Tripoli, Rashidieh camp in Tyre and Saida reaching over 2,159 individuals in these communities.

Related News
22/05/2017
One-quarter of men in Middle East and North Africa support gender equality
10/12/2021
Looking forward: Lebanon must place women’s rights and gender equality at the forefront of its national reform agenda
01/09/2021
In the words of Mariam: “Once I had a lawyer with me, everything changed”
02/08/2021
One year after the Beirut Port explosion, women’s organizations reflect on the needs of women and girls
18/06/2021
From where I stand: Supporting refugee women amidst violence in Gaza
END_OF_DOCUMENT_TOKEN_TO_BE_REPLACED