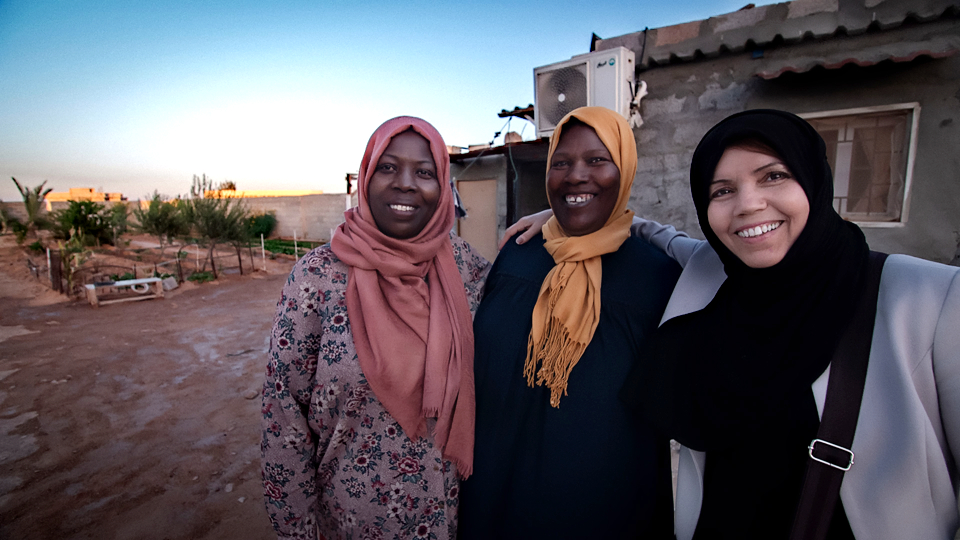 Amal Barakeh was born in Tawergha, some 40 kilometers south of Misrata in Libya. After the separation of her parents, she lived with her father and his family in Misrata. Her mother also remarried and formed her own family in Tawergha. Having good relations with both families, she used to travel back and forth between the two cities which had been bound by marital and neighborly ties for decades, until the civil war broke out in 2011.

Unfortunately, the populations of Tawergha and Misrata were caught up in the conflict of the civil war. In 2011, together with 40,000 other people from Tawergha, Amal, her mother and other relatives, took shelter in a refugee camp in Tripoli.

Having endured years of conflict and displacement, Amal firmly believed that there can be no winner in war and the only option for the two communities was to mend their social fabric. As a Libyan woman who belonged to both cities, she saw that she could contribute to build peace. Amal believed that Libyan women have borne the brunt of the conflict, and that only those who had experienced the pain of war could help to end it. She deliberately sought other women to work with her.

Amal was put in touch with Asia Al-Shwehdi through a UN-sponsored group on Women, Peace and Security in 2018. A mother of two, Asia lived with her family in a house in Misrata that became on the front line of the battle against pro-Gaddafi's forces. When they stormed the city, her house was destroyed, and she was displaced with her family. Like Amal, Asia was determined to do whatever it took to reclose the abyss between Libyans. A lasting friendship was instantly forged between the two women.

To secure support for their women-led initiative, the two women met with the Minister of State for Displaced Persons, Mr. Youssef Galala in 2018 and told him of their plan to establish a woman peace team to reconcile the two cities. The "Women's Peace Team Tawergha - Misrata" was born. The pair then set out to reach out to other women from both cities. Amal and her group were not after formal agreements that brush people’s resentment and grievances under the carpet. They have worked to achieve heart-felt reconciliation between the people of the two communities. For that, they needed to involve them in their peacebuilding endeavor.

Widely respected by both communities, Amal managed to organize visits of groups of grieving Tawerghan women to Misrata. She just wanted people from the two cities to sit in one room again.  Many women wouldn’t have set foot in the city were it not for Amal’s determination, persuasion and charisma. On the other side, Asia also managed to bring Misratan women to Tawergha.  The Women Peace Team held many talks with women from both sides to discuss how only reconciliation and co-existence could bring back the Libya they knew before the war. They let the women voice their grievances against one another and see for themselves how they all had been victims of a merciless war.  They held peacebuilding trainings so that women could actively help mend relations between the two communities.

Since then, around 100 women from both cities have joined the Peace Team, and they have all worked together to bring peace back between the two communities. They helped many Tawerghans return to their homeland. Amal and Asia have leveraged traditional customs to create opportunities for restoring peace and goodwill between the two communities.  For example, they organized a baby shower in Misrata where the family of the first Tawergha child born to a returnee family received Misratan well-wishers and their gifts.

Amal and her colleagues took many confidence-building measures to address people’s grievances,  such as visits to prisons to plead for the reduction in prison sentences for Tawerghan prisoners, some of whom have since been released. They have successfully advocated for independence of Libya’s Authority for Search and Identification of Missing Persons.

The group also established centres for psychological support in the two cities to help women cope with war and displacement trauma and get back on their own feet. The team also held economic empowerment trainings for vulnerable displaced Tawerghan women in Misrata to alleviate their hardships.

“The path towards stability is hard and requires a lot of time and support, particularly psychosocial support.”,” said Amal. “The percentage of people with mental health problems is very high, especially among women and children, because of what happened to them during the displacement and war. A lot of work is needed to restore their balance.”

Another important issue the women’s team has worked on was calling for the reopening of Libya’s coastal road.  This highway, closed since 2019, connects Misrata with Sirte and is vital for the movement of people and goods. Its closure has impoverished many Libyans and cut them off from their families across the country. On 20 June, the road was finally reopened ahead of the Second Berlin Conference on Libya, a gesture of progress in the peace process. During a ceremony that Amal and her team were impatient to attend, she told reporters that “despite all external forces that seek to divide us, we are here as one Libya; men, women and youth.” Those were to be her last words.

After the celebration, Amal took the wheel to drop her colleagues off before heading back home. On the way, she was involved in a car accident and tragically died. Her colleagues survived.

Amal is survived by her family, and by her colleagues at Women's Peace Team Tawergha – Misrata. Her memory will live on in the hearts of the thousands of people for whose peace and reconciliation she worked so tirelessly.

Related News
21/06/2021
Libya’s Ministry of Women’s Affairs and UN Women agree to collaborate on a National Action Plan on Women, Peace and Security
26/05/2022
Call for proposals: Strengthening the capacities of women candidates, elected women, and women leaders in CSO’s as well as women and men in senior governmental positions on WPS and women's role in peacebuilding and conflict resolution
19/08/2021
Youth blog: Inclusive peacebuilding and women’s human rights in the digital age
05/08/2021
Youth blog: Why we need women with disabilities in peacebuilding
24/06/2021
Sheikha Fatima bint Mubarak Women, Peace and Security Centre of Excellence Launched
END_OF_DOCUMENT_TOKEN_TO_BE_REPLACED