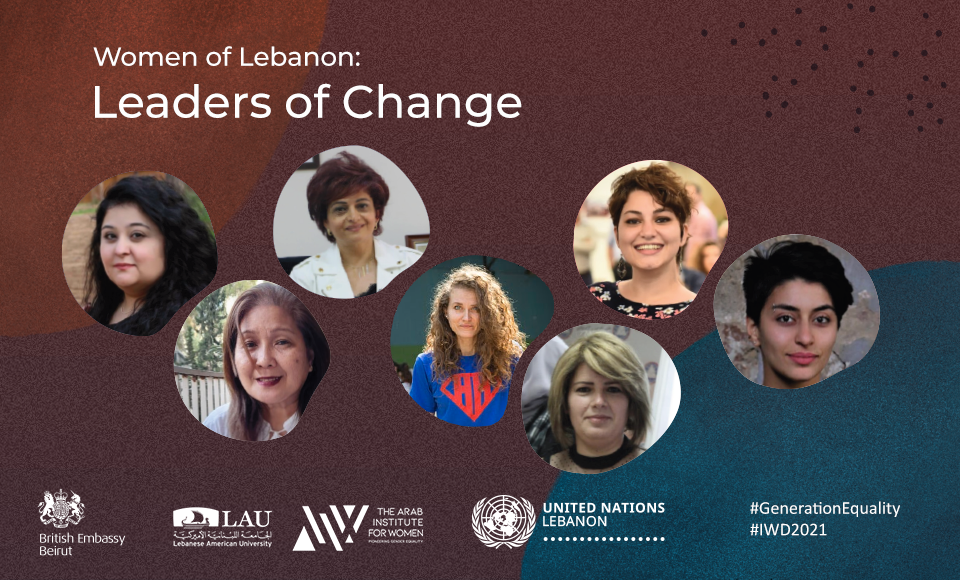 United Nations – On March 8, International Women’s Day, the United Nations honors women who are on the frontline of their fight against COVID-19.

Today, on International Women’s Day, the UN pays tribute to the countless women in Lebanon, striving in their communities to combat the far-reaching impacts of COVID-19, its health, economic and social effects on the country. While trying to mitigate the effects of this deadly pandemic, these women are working to build a future of equality, rights, and opportunities for all, as health care workers, caregivers, innovators, and community organizers. Today, we shine a spotlight on some of these women leaders actively working for social and political change, in a country that too often fails to recognize their important contributions.

In 2021, to recognize International Women’s Day, the United Nations System in Lebanon, coordinated by UN Women, funded by the United Kingdom  Government and in collaboration with the Arab Institute for Women at the Lebanese American University (LAU), comes together around a joint campaign building on the global  theme, Women in leadership: Achieving an equal future in a COVID-19 world.

Dr. Martin Longden Chargé D’affaires, of the British embassy in Beirut, said “On International Women’s Day, the UK celebrates the achievements of the women of Lebanon.  This has been a desperately tough year here, with women bearing much of the brunt of the pressures – as they seek to protect their families, communities, and country from the tumult.  But crises also present opportunities for change; and it’s time for meaningful action to reduce gender inequalities and unleash the full potential of Lebanon’s extraordinary women.’

The campaign, conceived around combating the impact of the COVID-19 pandemic and Lebanon’s compounded crises, includes a map of Lebanon showcasing female community leaders who are responding to the multiple crises facing the country. The map will remain as a permanent feature on the website of the UN in Lebanon. In parallel, a social media campaign will run from 8 to 14 March on the social platforms of the UN agencies in Lebanon. The campaign will also include Arabic and English social media cards and stories of women leaders in Lebanon.

“Women of Lebanon have played a pivotal role in responding to the COVID-19 pandemic and we should not underestimate the knock-on effects of this virus on Lebanon’s worst socio-economic and financial crises in its modern history” said Deputy Special Coordinator for Lebanon, Resident and Humanitarian Coordinator for Lebanon, Najat Rochdi. “Today, we pay tribute to thousands of inspiring women leaders in Lebanon, volunteers, nurses, caregivers, medical doctors, activists, social workers, mothers and many others. We honor their outstanding leadership in responding to this virus through different innovative and humanitarian ways. On today’s International Women’s Day and every day, let us commit to put women’s interests and rights front and center because it is the only way to get through the devastating effects of this virus faster and to rebuild a future of equality, rights and opportunities that benefit everyone,” she added.

The women highlighted represent the tens of thousands of women working in their communities to address the current crises Lebanon is facing. The IWD 2021 campaign recognizes women’s contributions to every aspect of society, valuing women’s work that too often goes unrecognized and unrewarded, and acknowledging that equality is a long way off.

Myriam Sfeir, Director of the Arab Institute for Women at the Lebanese American University (LAU) said “It is critical to showcase the often-invisible work of women’s rights activists – beyond the usual suspects. There are many women whose names we don’t know, whose voices we don’t hear, yet whose work is radically transformative and is based on true feminist leadership with a vision of an equitable future for all”.

The first National Woman’s Day was observed in the United States on February 28, 1909. In 1975, during International Women’s Year, the United Nations began celebrating International Women’s Day on March 8, which is now celebrated in many countries worldwide. It is a day when women are recognized for their achievements regardless of divisions, be those national, ethnic, linguistic, cultural, economic, or political.

Related News
04/11/2021
UN Women, The European Union and The World Bank launch two reports with a focus on economic and political opportunities for all women in Lebanon
10/09/2021
UN Women Statement in Response to Women’s Representation in New Lebanese Cabinet
21/12/2021
Three couples in Lebanon are reshaping patriarchal roles at home
10/12/2021
Looking forward: Lebanon must place women’s rights and gender equality at the forefront of its national reform agenda
02/12/2021
From where I stand: “As a taxi driver, men and women passengers would tell me that this is a man’s job, and I reply: this is a job, period.”
END_OF_DOCUMENT_TOKEN_TO_BE_REPLACED