In the words of Retibe Bilal: “Life is beautiful. Resist, set a goal and never stop!”

Retibe Bilal is a Syrian refugee who has lived in Gaziantep, near Turkey’s border with Syria, since 2013. She describes how the SADA Women-only Centre, which provides livelihood skills and psycho-social services to refugee and local women in Gaziantep, helped her build her self-confidence, learn new skills, and transform herself. Established and managed by UN Women, the SADA Women-only Centre is run in partnership with the International Labour Organization (ILO), the Association for Solidarity with Asylum Seekers and Migrants (SGDD-ASAM), and the Gaziantep Metropolitan Municipality, with financial support from the European Union (EU) Regional Trust Fund in Response to the Syrian Crisis, the 'Madad Fund', and the Government of Japan. 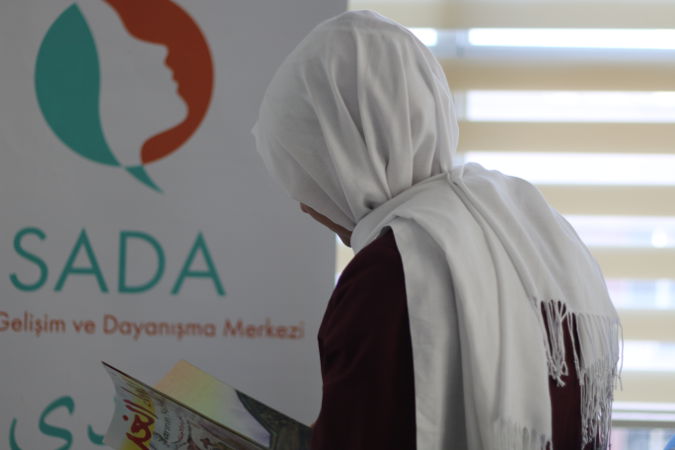 I got married when I was 21. I was a housewife in a very conservative community in Halep, Syria. When I couldn’t get pregnant for eight years, my husband married another woman. I lived with them and their children. We moved to Turkey in 2013, fleeing the conflict in Syria. Living with my husband and his second wife was like being in prison. I wasn’t allowed to go out – even if it was to the hospital. Not speaking Turkish was a serious challenge, too, it made feel isolated. One day, my husband suddenly divorced me. I was totally emotionally destroyed, weak and lost the will to live.

My life took a turn when a Syrian neighbour who is a member of Women of Future Committee, a network of Syrian women refugees working to empower women refugees since 2015, told me about the SADA Women-only Centre. At first, my family didn’t want me to go to the Centre by myself as I was a divorced woman. It took some time to convince them. Now, they see my improvement since I’ve started going to the Centre and are happy.

I took part in gender equality training at the SADA Centre and received social and legal consultations. This transformed me. The committee and the SADA Centre helped me build my self-confidence and empowered me. I discovered my abilities, learnt my place in society and about my rights. I started to speak up and stand up for my rights. On International Women’s Day, 8 March, the SADA Centre hosted a women-only festival where I read a poem I wrote and took part in a theatre play. I now feel a totally different person, someone who has goals and is useful to society.

One day, the SADA Centre called me about a World Health Organization (WHO) project that was training home care nurses for Syrian elderly and disabled refugees. That call completely changed my life. I registered for the training without hesitation. Once I complete the training, I will work as a home care nurse.

My eyes fill with tears when I think how the SADA Centre has contributed to my personal development and transformed my life. Many people told me that I was a lost cause and would never succeed.

Now, despite my current difficult condition, I have goals in my life. I will work, earn a livelihood and continue to improve myself. And then, I will get a driving license and buy a car!

I’d like to say to all refugee women: Being a refugee woman doesn’t mean that you are weak. You have a strong and determined woman within you. Don’t give up no matter how difficult the conditions are. Be confident and strong. Life is beautiful. Resist, set a goal and never stop!”