On the occasion of International Women’s Day, UN Women and its partners, the International Labour Organization (ILO) and the Association of Solidarity with Asylum Seekers and Immigrants (SGDD-ASAM), organized a certificate distribution ceremony to celebrate the achievements of the first graduates of SADA Women-only Centre in Gaziantep, Southern Turkey. This marks a new beginning for these first graduates – which coincides with the launch of the new Programme “Strengthening the resilience of Syrian women and girls and local communities in Iraq, Jordan and Turkey". A day after the ceremony, more than 300 refugee women and women from the local community participated in a women-only festival to celebrate International Women’s Day. 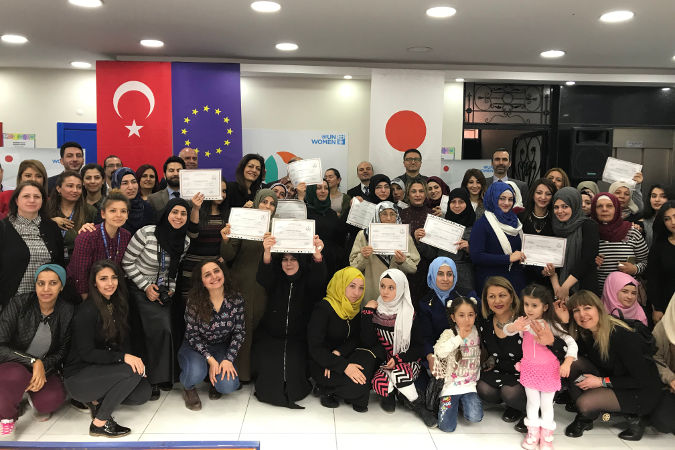 On 7 March 2018, the first graduates of the SADA Women-only Centre received certificates for completing their courses successfully. The Centre opened its doors in September 2017 and since then 1,756 women and 790 girls, mostly Syrian refugees, have registered with the Centre to benefit from social consultations, cohesion activities, vocational trainings and Turkish language courses. 767 women participated in the courses on hairdressing, skin care, computer courses, packaging and marketing, and received certificates of attendance. 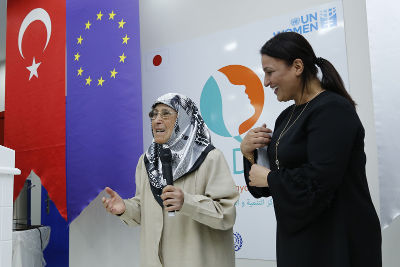 SADA Women-only Centre supports the empowerment of women and their engagement in social activities and the labour force. It provides the opportunity to acquire skills and knowledge to take up new jobs and establish businesses to improve women’s economic situation and overall safety. These opportunities also help to reduce the vulnerability to resort to negative coping mechanisms. Furthermore, the centre targets to strengthen the relationship between refugee and local community women – both socially and politically – and support women taking leadership in the community to eliminate harmful norms and gender stereotypes.

I am 75 years old and from Syria. I am so proud and happy to learn the Turkish language at this age in this Centre,” said a Syrian refugee woman who left her hometown Halep because of the war. 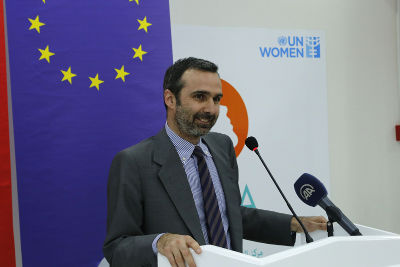 "SADA Women-only Centre is an important example of effective cooperation among different institutions with distinct strengths. The Centre will be a model to duplicate in the country as a great example of a safe space for women, providing them with livelihood facilities, said Michele Ribotta, UN Women Deputy Regional Director a.i. for Europe and Central Asia. After receiving their certificates, beneficiaries of the Centre shared their experiences highlighting the importance of having new livelihood skills to start a new life. The celebratory atmosphere of the gathering was filled with SADA Women Choir songs in Turkish and Arabic languages. 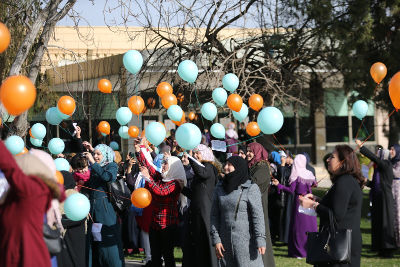 Following the certificate distribution ceremony, 330 refugee and local women from the SADA Women’s Centre gathered in a women-only festival to commemorate the day and celebrate women solidarity through a variety of events. At this festival, women presented their handicrafts and other products developed in the vocational courses of SADA Centre, performed a theatre play, read poems and short stories, and a women’s choir also performed at the festival. Expressing 'Time Is Now for Freedom and Peace' and their wishes-cards spreading the messages of peace and equality, women and children released orange and blue balloons in the air.

SADA Women-only Centre was established with financial support from the Government of Japan in the scope of “Gaziantep Women-only Centre: Providing Livelihood Support Project,” which is implemented under the leadership of UN Women in close cooperation with the ILO, SGDD-ASAM and Gaziantep Metropolitan Municipality. 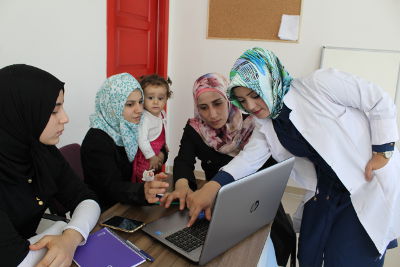 As of March 2018, 3,954 individuals from 1,300 families have been registered with the Centre, including 1,756 women and 790 girls who have benefited from social and legal consultations, awareness-raising sessions, cohesion activities and courses. 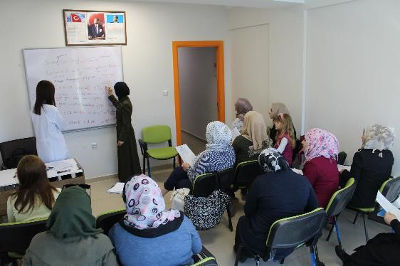