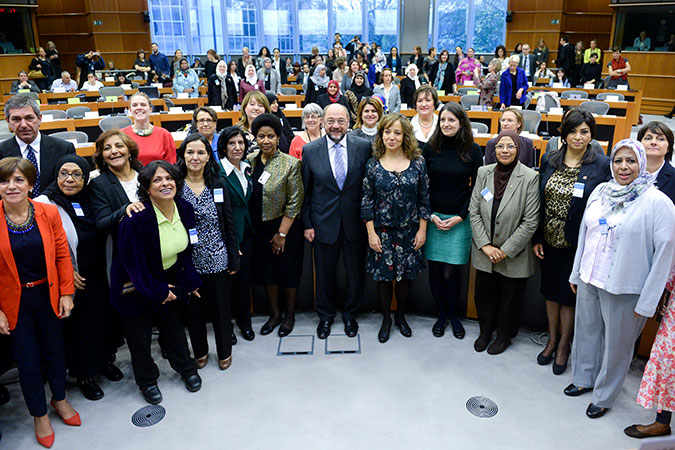 “The European Parliament is hosting this conference today because we want to bring together parliamentarians from Arab and European countries. I believe it will be extremely useful and interesting to learn from each other's experiences and to work together towards the common goal of achieving full equality. As UN Women Global Goodwill Ambassador, Emma Watson reminded us in her remarkable speech on gender equality and women's rights, ‘No country in the world can yet say that they have achieved gender equality. These rights I consider human rights’. I fully agree with her. We still have a long way to go,” said President of the European Parliament Martin Schulz. 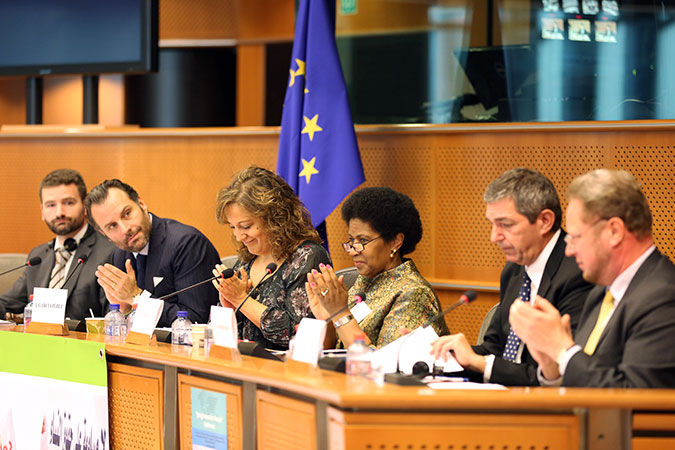 "This Conference takes place at a historic juncture, as we embark on the global review of the Beijing Platform for Action, and as the nations of the world come together to define, by 2015, a new global development framework with a specific goal to attain gender equality and empower women everywhere. Parliamentarians will play a key role in this context to advance gender equality at the local, national and global levels. Half of the people parliamentarians represent are women and girls. Their hopes and dreams are in the hands of those who, from day to day, make sure that laws are living and fully relevant instruments, and who represent them in the many difficult negotiations in international bodies,” said Executive Director of UN Women Phumzile Mlambo-Ngcuka.

"Gender equality is a key issue in the EU's Southern Neighbourhood region. It is key for political reforms, justice and economic development. I am confident this conference is one more step in our endeavor to empower women at the political level, both in the southern partner countries and here in the EU," said European Commissioner for European Neighbourhood Policy and Enlargement Negotiations Johannes Hahn.

The Spring Forward for Women Conference takes places at a historic moment in time, in the lead up to the Beijing+20 review in 2015, where UN Member States will come together to deliberate on the status of women 20 years since the Fourth World Conference in Beijing. The 1995 Conference produced the Beijing Platform for Action, adopted by 189 governments, and considered the most comprehensive affirmation of women’s rights and empowerment, which remains only partially fulfilled today.

The Brussels Conference will feed into the global review and will use the opportunity to reaffirm gender equality and women’s rights as essential means for achieving peace and security, human rights and sustainable development. The Women’s Rights and Gender Equality Committee of the European Parliament is hosting the plenary session day. On the second day, women parliamentarians from the Arab States will participate in the meetings of the European Parliament delegations working on the Arab States and exchange experiences and perspectives with fellow parliamentarians on the situation in their respective regions and countries.

The conference is part of the Regional Programme for the Economic and Political Empowerment of Women in the Southern Mediterranean Region (Spring Forward for Women), a joint initiative of UN Women and the European Commission. The programme, launched in October 2012, supports the economic empowerment of women in the Southern Mediterranean region and enhances their participation in the political and decision-making spheres. The programme is financed through a contribution of EUR 7 million (nearly USD 8.8 million) from the European Neighbourhood Partnership Instrument (ENPI) and of EUR 1.2 million (USD 1.5 million) from the UN Women core budget. Examples of other regional activities of the Spring Forward for Women programme include meetings with Members of Parliament in the Arab States; support to the League of Arab States on the follow up of the Cairo Declaration.