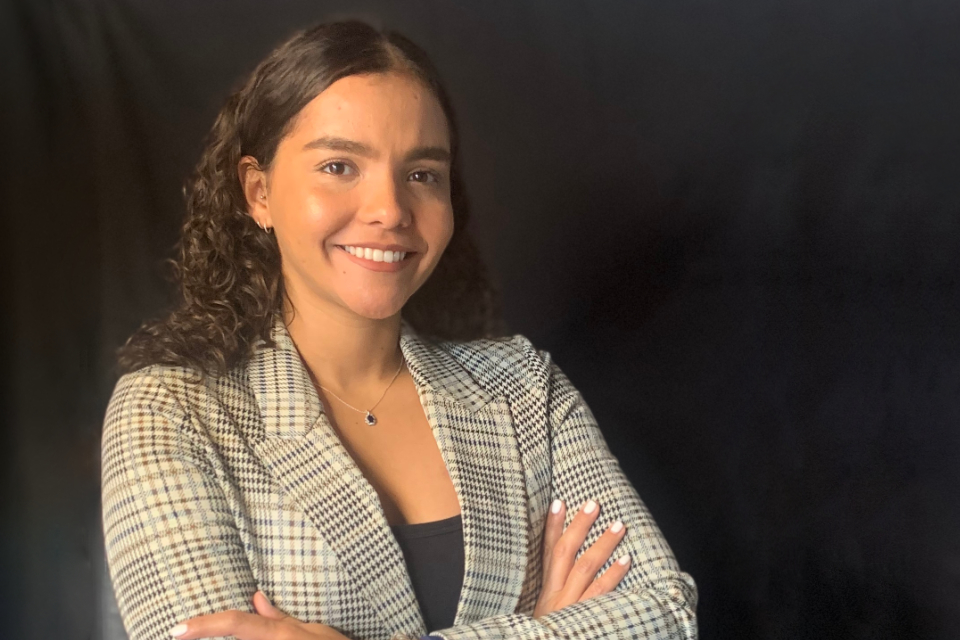 Yasmina Benslimane is a young human rights advocate from Morocco. She is the founder of Politics4Her, a feminist youth-led blog and movement that encourages young women and girls’ inclusive participation in politics. Ms. Benslimane has worked with human rights entities, non-governmental organizations and different UN agencies. She also participated in UN Women’s Young Women Peacebuilders Programme.

As our generation is often labeled as “digital natives,” we must believe and invest in our expertise in digital technologies to promote the peacebuilding and women’s human rights agendas. It is true that there is still a huge digital divide, with 360 million young people  lacking access to the internet, particularly in developing countries. Girls and women often have even less access to technology and the internet.

While some might argue that digital technologies and in particular social media don't bring real-life change, movements like MeToo, Balance ton Porc, Masaktach, NiUnaMenos and HeForShe, amongst others, have marked history for women. Having access to the internet is not only a driver for economic growth, gender equality, human rights but also inclusive peace building.

When the pandemic hit back in March 2020, I was impressed by the increase in Moroccan advocates’ pages. We have now become a coalition and work together. Whenever an issue arises in our country related to human rights violations, women's rights violations, promotion of gender-based violence, we act. Together through social media, we have been mobilizing, peacefully. As young female peace builders are actively advocating for the implementation of gender-inclusive policies as well as deploying more women in peacekeeping missions, many have taken up the fight in the virtual sphere since the pandemic hit.

COVID-19 has exacerbated inequalities, increasing challenges for women across the globe. We must keep on raising our voices for the voiceless, not because they are not capable but because it is our duty as the next generation of peace builders and global citizens. As movements across the world have shown recently, from Senegal to Palestine or even more recently Cuba, the youth is at the frontline, spreading awareness thanks to what has become the 21st century's most powerful tool: social media. It has been used in a positive light so that we can disrupt, so that we can have our voices heard, so that we call for change so that even if we are not included in decision-making and peace processes, we can find a way to take the lead.

One of the main reasons I decided to launch Politics4Her was because I felt that young women were rarely a voice in male-dominated fields such as politics, international relations, diplomacy, or even peace building. On top of that, countries in our region, some affected by war, conflicts, and terrorism, do not receive proper media coverage, let alone with inclusive feminist and youth perspectives. While it is firmly believed that including more women in social, political, and economic dimensions is a path towards gender equality and therefore peace, we still have a long way to go.

Even though challenges arise such as misinformation, disinformation, hate speech, and we do get many attacks and threats, together we are stronger, we are agents of change, through this digital world we bring real-life changes and promote coexistence, peace, equality, justice, values we should all stand for. For the first time in history people that have been discriminated against or marginalized, that have seen their freedom taken away for decades, have a tool drastically shifting the power balance. So, we must not overlook its power and potential in the promotion of peace building and women’s rights.

Related News
01/11/2022
A group of women has bridged differences towards peace in Syria
24/10/2022
How women made use of tribal norms to mediate conflict in Yemen
20/10/2022
Amidst increase in violent conflict, the situation for women, peace and security worsens, new UN report shows
19/10/2022
In focus: Women, peace and security
26/05/2022
Call for proposals: Strengthening the capacities of women candidates, elected women, and women leaders in CSO’s as well as women and men in senior governmental positions on WPS and women's role in peacebuilding and conflict resolution
END_OF_DOCUMENT_TOKEN_TO_BE_REPLACED