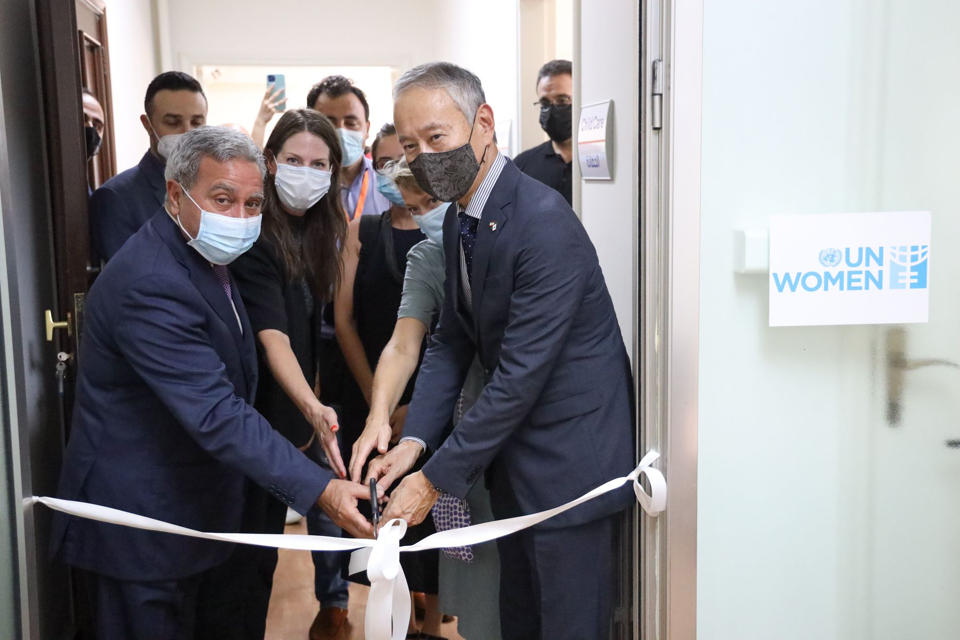 At the opening of the Safe Space. Photo: UN Women/Dar Al Mussawir

Beirut — Women and girls survivors of violence will benefit from the services of a new Safe Space managed by the Ministry of Social Affairs in Badaro, supported by UN Women and with the generous contributions of the Governments of Japan, Norway and Finland. The Safe Space established by CARE International is aimed at ensuring greater protection for women and girls from violence and exploitation.

The center facilitates women and girls survivors access to essential services and resources, including protection and social services, legal assistance, and support groups.

The activities of the new Safe Space were launched in the presence of the Minister of Social Affairs, Dr Ramzi Moucharafieh; the Director General of the Ministry of Social affairs, Judge Abdallah Ahmad; the Ambassador of Japan to Lebanon, H.E. OKUBO Takeshi; UN Women and CARE International. The guests toured the center and its facilities, which are designed to ensure privacy, confidentiality and protection for survivors, as well as a child-friendly space with play equipment and toys. Further rooms will host activities and vocational trainings to help survivors develop skills to support their independence. 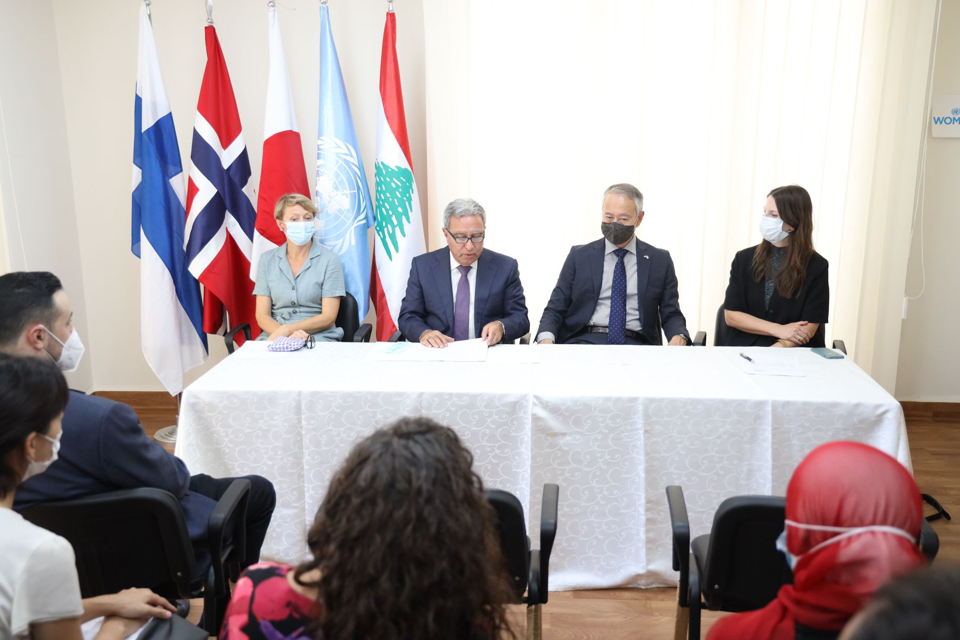 In his remarks during the opening, the Minister of Social Affairs, Dr. Ramzi Moucharafieh, said “we are meeting today with our partners, not to curse the darkness but to light a candle for women and girls - both Lebanese and Syrian Refugees – who are looking for a Safe Space. We are launching and handing over this Safe Space, located at this Social Development Center in Badaro, to the Ministry of Social Affairs, and which was rehabilitated by CARE International through the commendable funding of the Government of Japan, the Government of Norway and the Government of Finland.”

OKUBO Takeshi, Ambassador of Japan to Lebanon highlighted that “Japan has been a key supporter for various UN Women’s initiatives in Lebanon over the years, but it is more urgent than ever to address gender-based violence, which appears to have increased due to the current socio-economic hardship in the country. Japan will continue to cooperate closely with key actors across the country in responding to gender based violence, thereby providing assistance to the socially vulnerable people from the viewpoint of implementing the human security.”

Tarja Fernandez, Ambassador of Finland to Lebanon, said “we are very content for the rehabilitated Badaro Centre for women and girls. The Centre has now adequate facilities for social workers to offer their services for women and girls who need those. We encourage everyone working in the Centre to make full use of the safe space.”

Martin Yttervik, Ambassador of Norway to Lebanon, commented “promoting gender equality and addressing SGBV remain high priorities for the Norwegian development cooperation and humanitarian assistance in Lebanon. The embassy of Norway in Beirut is very proud to have been engaged in a partnership with UN Women - Lebanon since 2019. We congratulate UN Women and the local and international partners on the opening of the new SDC in Badaro. The new safe space will provide much needed support for women in Lebanon who are bearing an increasing and disproportionate burden of the multifaceted crisis that the country is going through. Norway continues to stand with the people of Lebanon by extending support to its most vulnerable communities.”

Ms. Rachel Dore-Weeks, Head of UN Women in Lebanon, noted that “feeling safe and able to make choices over their lives is fundamental in supporting women to rebuild their social networks and regain their normal lives. For this, safe spaces are needed where women and children can feel comfortable and protected. We’re thankful to the Ministry of Social Affair’s for their long partnership and trust in us on this work.”

Gul Rehman, Deputy Country Director of CARE International in Lebanon said “This project embodies the mission of CARE International who is engaged in the protection of women and girls. And this center came as a need for a safe space for women and girls requesting services by the Ministry of Social Affairs, so their dignity is preserved and their security assured. This center represents the success of cooperation between the government, UN agencies and INGOs”.

Related News
23/06/2021
UN Women and women community Mediators Honour the life and legacy of Rebecca Dykes
08/12/2022
Call for proposals: Partners for Elements of UN Women Lebanon’s Thematic Area Women’s Political Participation (WPP)
26/05/2022
UN Women and Finland shine light on women’s local peacebuilding in the MENA region and rally support for their vital contributions to peace
09/02/2022
From where I Stand: “Women make up half of our society, having their voices heard in disaster response planning is vital.”
09/02/2022
From where I stand: “Women are drivers of change for fostering peaceful communities”
END_OF_DOCUMENT_TOKEN_TO_BE_REPLACED