In the words of Fadwa Kamil: “Many people still think that journalism is a man’s job” 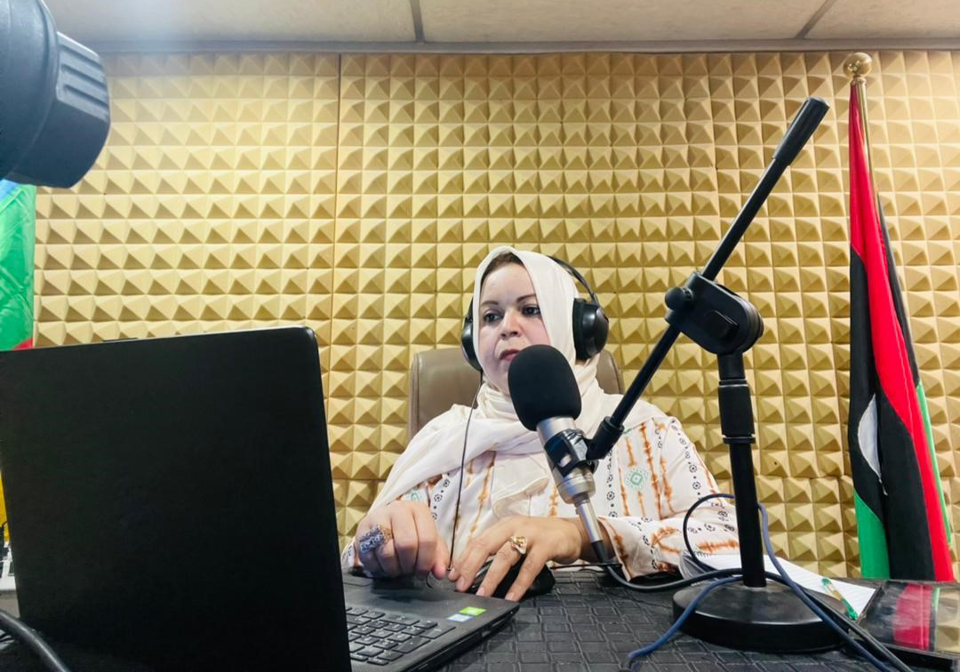 Fadwa Kamel, 41, lives with her husband and four children in Zuwara, northwestern Libya. She began working as a journalist during the uprising in 2011. She was the editor-in-chief of the Amazigh-speaking Tagermas newspaper and is now Deputy Director of the Libyan Organization for Independent Media. Along with around 20 young female journalists from Libya and Tunisia, Fadwa participated in UN Women’s “Women News Fellowship Programme” supported by the United Nations Department of Political and Peacebuilding Affairs, in order to advance her gender-sensitive reporting skills and promote national reconciliation, peacebuilding, human rights and gender equality through the media. Since then, Fadwa has become a trainer of trainers, teaching young Libyan journalists how to apply a gender lens to the reporting of Libya’s affairs.

I am not a journalist by training. I hold a bachelor’s degree in French literature and writing has always been a hobby. At the beginning, I used to write under a pseudonym because society frowns upon women who voice what’s on their mind or make public political commentary. I used to post my articles on social media, and they had a good reception among my followers. Online digital news outlets started contacting me, asking permission to publish my articles. This motivated me to take courses to develop my journalism and news reporting skills.

I officially started my media career as a correspondent with Media in Cooperation and Transition, a German non-profit organization, and then with Kasas Radio in Zuwara where I was the first female presenter to cover Libya’s 2011 revolution in both Arabic and Amazigh.

While society’s perception of female journalists has improved since then, many people still think that journalism is a man’s job. Many say that a woman’s voice should not be “heard,” using religious or traditional pretexts. Changing these views has been challenging, but I persisted and made it my mission to be a journalist. I love my work and, like everyone, I have the right to choose my own career.

Throughout my journalism career, I have seen how the media is also responsible for entrenching stereotypical gender roles in society. More often than not, TV and radio shows put women in a domestic ‘box’. They are usually depicted as mothers who raise children, cook, clean and take care of the house. Even when shows feature a working woman, the focus is usually on how she can strike a balance between her professional life and housework, as if the latter could only be performed by her. Actors in commercials for cleaning and food products are mostly women, reinforcing these gender stereotypes.

On the other hand, political shows invite male commentators because they are perceived to be more aware of the country’s politics and its affairs. Even political parties that count female members in their ranks usually appoint a male representative or spokesperson as if men had a better understanding of Libya’s political and social affairs than women.

The media mirrors society. When it minimizes women’s roles and relegates them to the kitchen, it limits their opportunities to do something ‘outside the box’. Indeed, Libyan women’s representation in politics and media lags far behind men. This is not due to their lack of skills, but lack of opportunities.  While there are more women in the media sector today, they mostly occupy certain stereotypical positions such as presenters or assistants. Senior media positions are still largely held by men.

It is time that we enforced existing laws that guarantee women’s representation in all sectors, including the media, and introduced new ones to finally achieve gender equality and build a democratic and inclusive Libya.”

Related News
14/11/2022
Hania Boukhrais: Despite the violence, I will continue my municipal work
14/11/2022
Halima Al Maghrabi: A young leader defends her right to stand in municipal elections to represent her community
08/03/2022
UN Women and Serviceplan partner to promote gender equality in the Arabic language
08/03/2022
Gender equality in the workplace starts with a job ad
16/12/2021
Famous Actor Kerem Bürsin became the first National HeForShe Advocate for Turkey
END_OF_DOCUMENT_TOKEN_TO_BE_REPLACED