I am Generation Equality: Saif Dabbas, HeForShe and youth activist 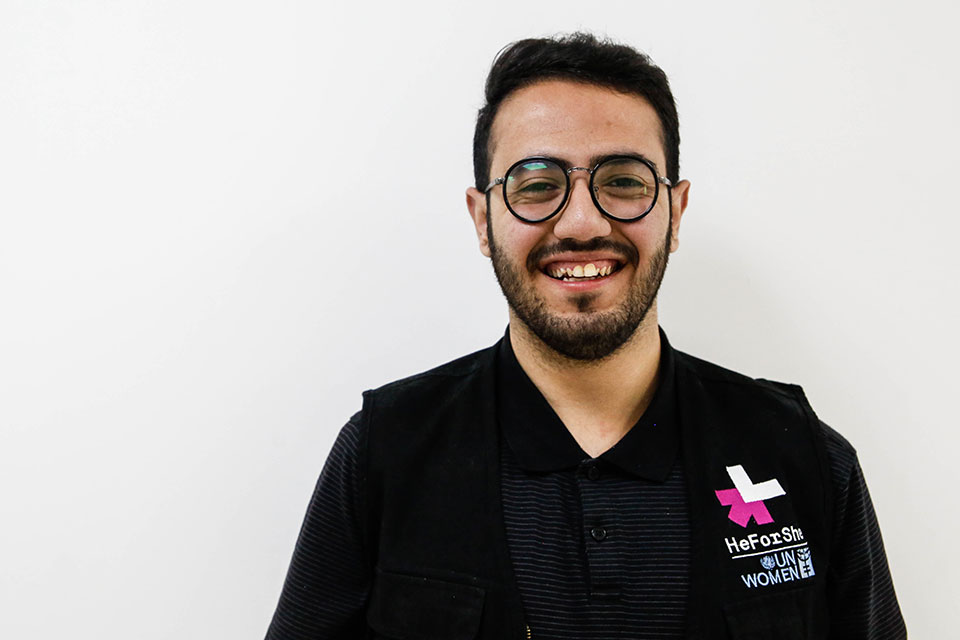 Saif Dabbas, 19, is a member of the HeForShe campaign in Jordan. Photo: UN Women/Lauren Rooney

I am Generation Equality because…

Three things you can do to become part of Generation Equality, according to Saif Dabbas:

It all started with my family. My older sister was a judo player on the Jordanian national team, and it helped me understand that women can pursue their passions and end stigmas. My parents were supportive; they wanted her to succeed.

When I began volunteering for HeForShe in March 2016, I was the youngest member of the team. I began to understand the various challenges that many people face, even if they’re not speaking up about it, and learned how to fight for justice.

Socially it’s not common to talk about gender equality in the Middle East, so it wasn’t easy to be a [self-proclaimed] feminist in Jordan. I faced judgement for defending [women’s] rights.

One of my responsibilities as a HeForShe core team member is to educate my peers on gender equality. We are the leaders of tomorrow Our biggest achievement has been to get 20,000 people in Jordan to sign up to the HeForShe campaign and commit to make changes in their own lives.

One thing that hasn’t yet changed for women in Jordan is financial independence and the gender pay gap. Women get paid less and their husbands have the power to take money from their salaries each month. This inhibits women’s empowerment, because they are not free to do what they want with their money, such as invest in a business or travel.

Community productivity is reduced by women marrying at a young age, not receiving their university education, and not entering the workforce. Although, as a society, we are more accepting of women working outside the home, we have a long way to go when it comes to economic empowerment of women.

Engaging in conversations that shift attitudes and cultures

“If each one of us reached just five people about gender equality, we could make it a national conversation”

As a gender equality advocate, I aim to change mindsets. HeForShe does this through events and activities that bring people together, such as debates, concerts, plays, and freeze mobs. We focus on art because art is everybody's language. Everybody can understand art, regardless of where they are from.

To truly shift culture, we must teach gender equality from a young age. Curriculum about gender-equal rights and responsibilities should be taught in schools, so that young people are more responsible and aware as they grow up.

It’s difficult to get people to understand another person’s experience and accept it, especially in communities that are deeply rooted in their traditions. To change people’s mindsets about gender equality, we listen closely, identify the gaps in their perspectives, and then engage them [in conversations]. We are making an impact, and some people whom we engaged are now volunteering for HeForShe.

These are small steps, but if each one of us reached just five people about gender equality, we could make it a national conversation in Jordan.

Saif Dabbas, 19, is a member of the HeForShe campaign in Jordan, a solidarity movement for the advancement of gender equality led by UN Women. Dabbas has been a feminist advocate since age 14 and believes youth should be at the forefront of the gender equality movement.