In the words of Marwa Azelmat: “When it comes to ending violence against women, youth can be game-changers" 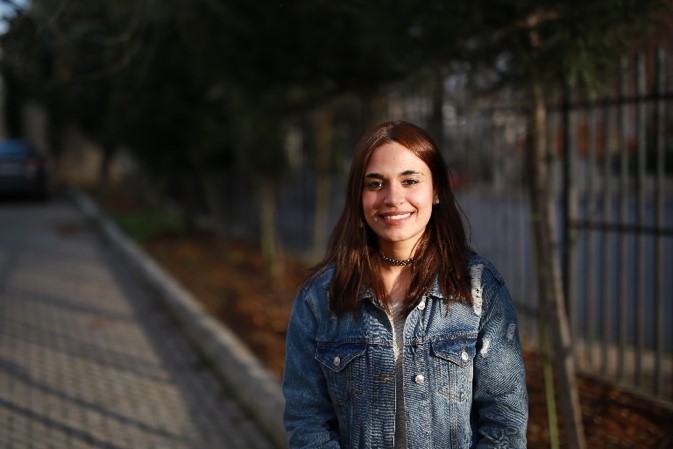 Marwa Azelmat, 23, is an IT engineer from Morocco. She has worked in the development of programmes and policies addressing violent extremism and gender through implementation of the Sustainable Development Goals. A post-graduate law student at Queen’s University in Belfast, Marwa is currently conducting research on the rise of digital authoritarianism with a special focus on gender-based online violence. Marwa attended the Regional Youth Workshop on Ending Violence Against Women and Girls in the Arab States generously supported by the Government of Japan.

She is a member of UN Women’s Youth Gender Innovation Agora.

“To a large extent, youth are considered as observers: Youth often take a seat to observe which decisions other stakeholders have taken on their behalf. When it comes to ending violence against women and girls, there is no space for observation. Everyone needs to act, and those who are identified as most vulnerable need to be included. Violence against women and girls often begins in small forgotten places, and those same places are inhabited by youth. Youth are not only witnesses but also, they can be "game-changers", if they are given the right tools and capacities to shake things up.

As a Gender Agora member, I familiarize myself with the recent UN Women reports and campaigns. Thus, I am more likely to present evidence-based arguments within my academic work and during high-level events that I attend as a youth delegate. This is really crucial in my advocacy work, because it shows that young people can work in policy issues. I am now building my own movement of digital activists or how I love to call them ‘DIGIktivists’. My digital activism seeks to build resilience online, shatter gender-based stereotypes and provide a safe participatory space for young women where they can channel their experiences and knowledge of gender-based violence into creating opportunities for empowerment. The whole idea behind this movement is to create positive e-content to prevent the spread of hate, discrimination and extremism.

To end violence against women in the Arab States region it is essential to involve local experts because no one can understand the Arab States region more than its people. For concrete actions, I believe we must focus on empowering the survivors of violence, and women in general. Increasing their chances of employment is very important, through funds, tools, knowledge, moral support and visibility. And in this regard, promoting digital literacy is relevant, because the online space enables women to start their jobs from their homes.

The Regional Youth Workshop on Ending Violence against Women provided a real participatory space for like-minded young people to gather to commit to the advancement of gender equality in the region. Also, the presence of young men is vital for a women's movement. We must involve men in our work as efficient advocates, including to promote our activism in our patriarchal societies.”