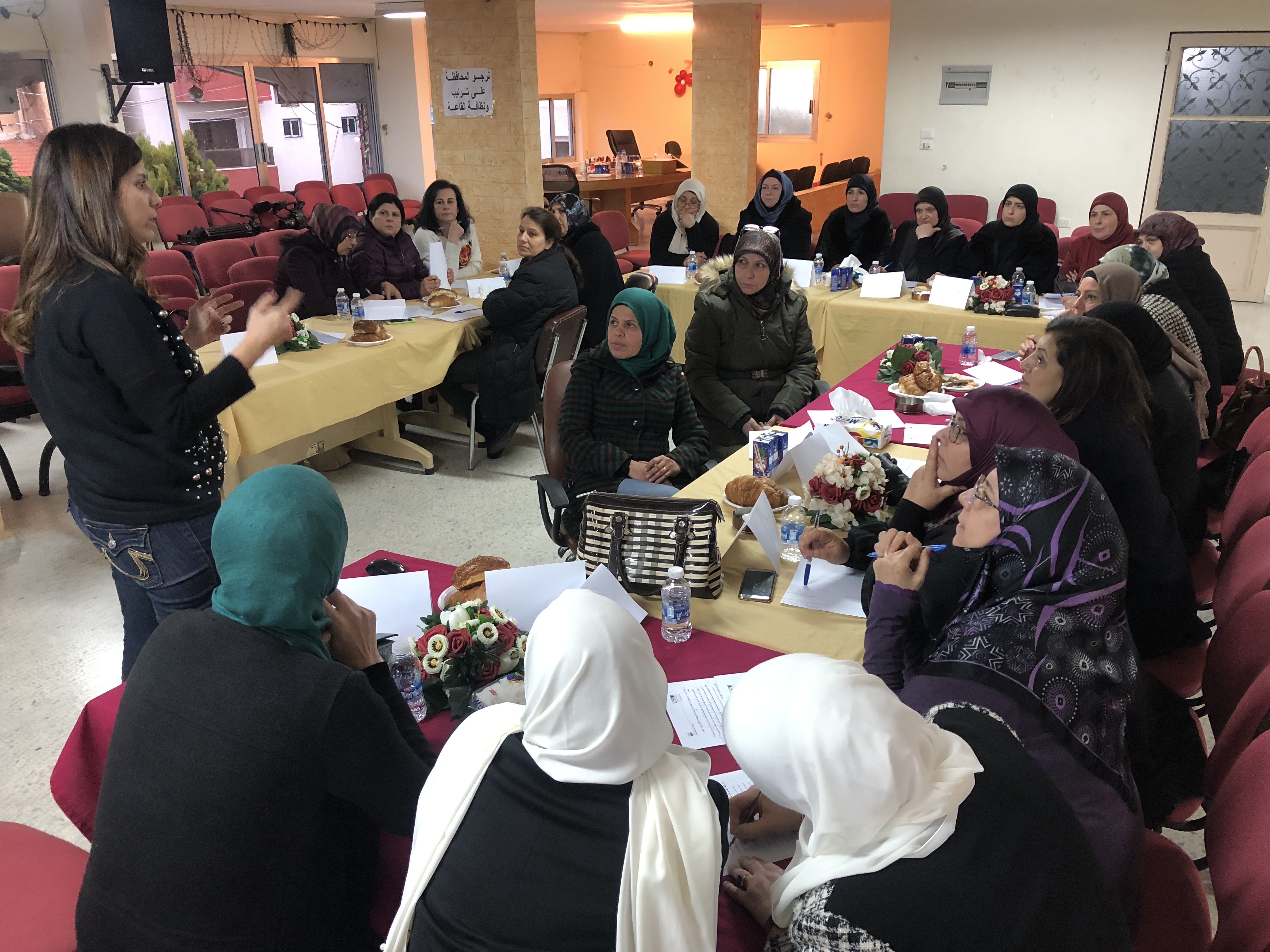 Training on mediation and conflict resolution for women in Abbassiyeh, South Lebanon. Photo: Courtesy of UNIFIL.

On a cold, rainy day in February around a dozen women who have been working at the community level to resolve conflict gathered from Tyre and neighboring Qana in South Lebanon to begin their first training on conflict management and prevention. The energy in the room was unrivaled and unaffected by the blustery weather.

The women are diverse in age and come from different professional backgrounds as activists, teachers, journalists, and social workers. But they have one thing in common, a drive to build peace and a desire to actively participate in decision-making processes in their local communities. They know that their ideas, perspectives, and experiences as women matter.

Another group of women, this one larger, meet in the municipality of the neighboring town of Abbassiyeh. This is their second meeting, and the women arrive one by one, excited and anxious to learn more. Lina Husseini, a business owner noted that she’s been monitoring herself and how she communicates with others. She said, “this topic [mediation] is so crucial and so needed in our community. Every day I learn something new and I want to learn more.”

In 2018, UN Women and the United Nations Interim Force in Lebanon (UNIFIL), embarked on a pilot project to train women in South Lebanon in acquiring mediation and negotiation skills, generously funded by the Government of Italy. The trainings serve to contribute to peacebuilding in Lebanon and to the implementation of UN Security Council Resolution 1325 on Women, Peace and Security.

The Resolution reaffirms that sustainable peace cannot be achieved without the participation of women and calls on member states to increase women’s participation in decision-making process at all levels including in conflict prevention.

The trainer, Jocelyne Gerges from the Beirut-based University of Saint Joseph’s Centre for Professional Mediation, begins the sessions with a reflective exercise called “heik sar” or “that’s what happened.” It allows participants to reflect on their daily interactions, analyze their reactions, especially the way in which they communicate to resolve day-to-day issues.

Faten Chalhoub, a university professor and an environmental activist, shared with us how she tried to stop a man from hunting birds nearby her home-because this time of year, it’s against the law. Another participant described how she addressed children from the neighborhood trespassing onto her land. These concrete examples are openly discussed and analyzed and give participants the ability to project on their newly acquired knowledge from an intellectual and emotional standpoint.

Once the trainings are concluded, some of the participants will be accompanied and coached in the field. The importance of promoting women’s active participation in community conflict resolution and decision-making cannot be more underscored; the acquisition of mediation and negotiation skills is critical for this, in creating more space for women’s participation in political and public life and in conflict prevention and resolution. The atmosphere in the trainings and discussions is lively, and the discussions and dialogue between the participants is rich, and at times, intense. The intensity can only signal the vital process the participants are undergoing, as they reflect on their actions and interactions in the private and public sphere, with self-reflection and knowledge of others being some of the most significant attributes for future mediators.

“We know peace only holds when women are directly engaged in its brokering – at the international, national and community level. This relationship between UN Women, UNIFIL and the University of Saint Joseph is central to UN Women’s work in this area – in bringing together exceptional women and leading expert organizations from Lebanon to demonstrate women’s leadership in peacemaking”, says Rachel Dore-Weeks, Special Representative of UN Women's Regional Director in Lebanon.

In 2017, UN Women led the UN’s support to the Government of Lebanon through the National Commission for Lebanese Women to develop the country’s first National Action Plan (NAP) on UN Security Council Resolution 1325. The draft Lebanon NAP 1325 was finalized in 2018 and includes five strategic priorities including women’s increased participation in decision-making processes at all levels, conflict prevention, prevention of and protection from gender-based violence, relief and recovery efforts, and the amendment, adoption and implementation of laws to eliminate discrimination against women and girls. The NAP 1325 is awaiting endorsement by Lebanon’s Council of Ministers.

Afaf Omer, Gender Advisor for UNIFIL states “As Lebanon prepares its first National Action Plan for the implementation of UNSCR 1325, it is important that Lebanese women are prepared to participate in all aspects of peace building and conflict resolution. These workshops prepare Lebanese women to be effective mediators and ready to manage all types of conflict. In a post conflict society such as Southern Lebanon, these workshops also help bring women together to brainstorm on issues they face and provide a forum to manage conflict in a meaningful way.”