This is what leadership looks like: Meet Governor Manal Awad, working to create safer cities and public spaces for women and girls in Damietta 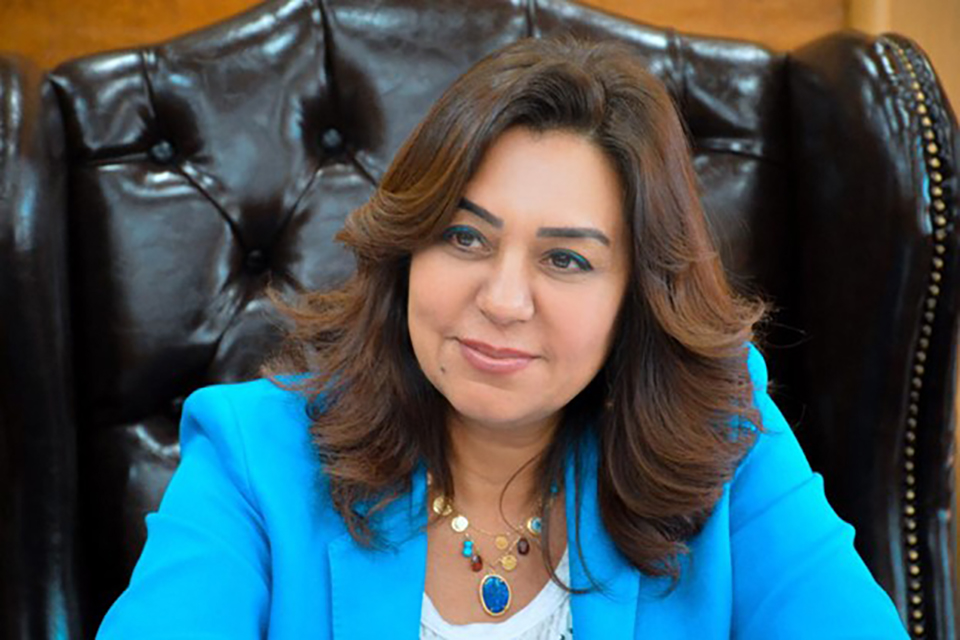 Dr. Manal Awad in her office. Photo Credit: Courtesy of Governorate of Damietta

In recent years, Egyptian women have held positions of leadership, but never more so than now. Currently, women make up 27% of the Parliament, 13% of the Senate and 25% of the Cabinet of Ministers. Dr. Manal Awad is one of those Egyptian women who are making their case in the leadership arena. In 2018, she became the second woman Governor in the history of modern-day Egypt after her appointment in Damietta, a highly strategic Governorate known for its skilled labor force and vibrant economy. In this capacity, Dr. Awad is playing a leading role in the implementation of the “Safe Cities and Safe Public Spaces” programme, in partnership with the National Council for Women (NCW) and UN Women Egypt and in collaboration with local grassroots organizations in Damietta. The “Safe City and Safe Public Spaces Flagship programme” is implemented in Cairo and Giza with the support of the United States Agency for International Development (USAID) and the Spanish Agency for International Development Cooperation (AECID), and the programme is being upscaled in Alexandria and Damietta with the support of the Kingdom of the Netherlands.

“My family’s support and encouragement pushed me forward in every step [of my journey] and the growing culture of equality between men and women led to many [positive] changes that were not possible in the past. Moreover, Egyptian women have received great and unprecedented support from the political leadership during the past years, especially after President Abdel Fattah ElSisi, President of the Arab Republic of Egypt, declared the year 2017 as “The year of Egyptian Women”, as well as the announcement of the National Strategy for the Empowerment of Egyptian Women 2030 and the issuance of a number of laws that guaranteed women’s right to protection, equality, and equal opportunities at all levels. Currently, Egyptian women are occupying leadership positions in state institutions and contributing to key national development experiences. Egyptian women have proven that they are capable of facing any difficulties. For example, Egyptian women are playing a leading role in confronting the COVID-19 pandemic at all levels, in various fields, and on the frontlines of the medical sector, achieving great success in managing this crisis. I send my sincere greetings to Egyptian women and women cadres in all fields for their leadership and honorable role and for their active participation in all aspects of national action.” says Dr. Manal Awad, who started her career as a renowned veterinary academic and served as the head of the Centre for Veterinary Serum and Vaccine Research Institute (VSVRI) before being appointed as the Deputy Governor of Giza in 2015 and as the Governor of Damietta in 2018.

Dr. Awad’s leadership style is very pragmatic “I always look at the objectives that I want to achieve and work towards improving the current realities. Tangible achievements motivate me to do more”.

Dr.Awad is also keen on being a role model for girls and women and on sharing her advice with them. “Firstly, keep the goals that you want to achieve in your mind and start with excelling in your field of choice because it will be your first step towards leadership. Secondly, participate in addressing your community’s problems and offer solutions to these problems.”

“When I took office as the Governor of Damietta, the situation of women in Ezebt El-Borg city drew my attention. The men of Ezebt El-Borg mainly work in the fishing industry and many of them stay in the sea for prolonged periods and some of them lose their lives in the sea, leaving their families behind. I started to think of ways to support these women in dealing with this difficult situation and I coordinated with the National Council for Women and UN Women to implement the “Safe Cities and Safe Public Spaces” Programme in Damietta, which was previously implemented in Giza Governorate when I was working as Deputy Governor of Giza… the programme aims at empowering women socially and economically, offer a better reality for them and their children and end violence against women in all its forms.” states Dr. Awad.

To contribute to the economic empowerment of women in Ezbet El-Borg, the programme is currently providing market-oriented skill-building trainings for women working on various handicrafts in the local community. Furthermore, following close consultation with local community members, the programme is currently contributing to enhancing women’s accessibility to public spaces through gender-sensitive design and upgrading of the space surrounding Misr Public Library premises, the main public library of Ezbet El-Borg. The upgraded space will include a playground for children, a small vocational training center for women, a family area and area for public events and performances, among other components.

Leadership in the time of COVID-19

“We thoroughly implemented national proactive and preventative measures with all of our forces to prevent the spread of the virus. We are successful in managing the crisis, while also continuing our economic activities.” mentions Dr. Awad.

Gender-sensitive response was also at the core of Dr. Awad’s leadership during COVID-19.

“We implemented the decision of the Prime Minister, which allowed working women who have children less than 12-years of age to receive exceptional leave for three months. At the Governorate level and in coordination with other relevant authorities, we set a plan to reach women in rural areas to raise their awareness on COVID-19 prevention measures because we believe that women are the core of the family and they play a leading role in managing the crisis.”

Moreover, as part of the national awareness raising activities, women of Damietta were assured continued support for essential services in situations of violence against women (VAW) through the partnership between the National Council for Women, Ministry of Social Solidarity (MoSS) and UN Women.

Related News
28/03/2022
In the words of Asmaa Emam: "After receiving my national ID card, now I am able to take effective steps in my life and the lives of my children"
23/03/2022
In the words of Amr Mosaad: "My participation in the family camp on “Gender Transformative Parenting” made me realize the importance and the happiness of being with my family”
23/03/2022
Gender Equality and a Sustainable Planet - We cannot achieve one without the other
10/02/2022
UN Women and Procter & Gamble launch the 3rd Edition of their programme for supporting Women Entrepreneurs in Egypt
07/02/2022
National efforts continue to eliminate Female Genital Mutilation and reinforce a zero-tolerance culture
END_OF_DOCUMENT_TOKEN_TO_BE_REPLACED