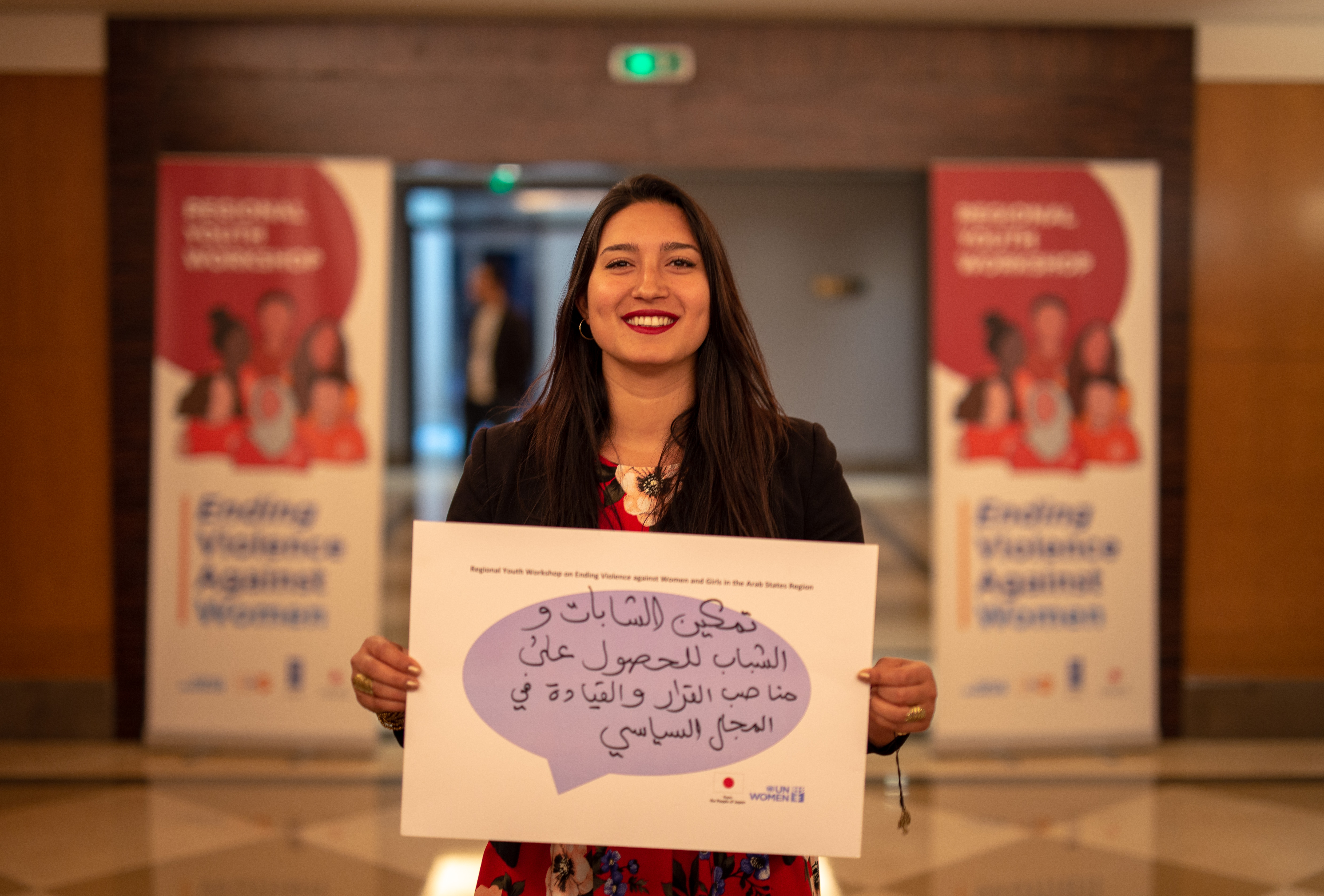 Racha Haffar is a feminist award-winning women rights activist from Tunisia. She is the founder and president of ‘Not 4 Trade,’ the first anti-human trafficking NGO in Tunisia. She is also a Fulbright Alumna at the University of Kentucky, a journalist and a professor of public speaking and professional communication. An internationally-certified trainer on Human Trafficking, Racha is passionate about fighting human trafficking and modern-day slavery. As a member of UN Women’s Youth Gender Innovation Agora, she recently attended the Regional Youth Workshop on Ending Violence Against Women and Girls in the Arab States generously supported by the Government of Japan.

How did you become involved in working on human trafficking?

When I was 18, I was almost trafficked into sex work in England where I had initially planned to study. I was looking for babysitting jobs to support myself financially, and I started receiving offers of employment online. When I asked to talk with the “families”, my requests were declined, and I became suspicious. I began researching for babysitting jobs online and realized that it was a trap. I was fortunate to escape being trafficked. Years passed, and I forgot about this incident, but one day when I was doing research for my master's course on human rights I met a Nigerian survivor who had been trafficked for 10 years, and it all made sense to me. I realized how blessed I was, and I felt I had to do something. I spent a year researching the subject of trafficking in women in Tunisia and realized that there were no specialized organizations dealing with the issue of trafficking. So, I decided to take the lead to change that. I wanted to make sure every girl and woman was heard and had the opportunity to escape trafficking or regain her life if she was trafficked. This has become my life’s mission;. believing in the importance of saving lives keeps me going.

How do you work to combat human trafficking in Tunisia?

I have been working relentlessly on combating human trafficking through my NGO “Not 4 Trade”. Our work includes the 4Ps namely; Prevention, Protection, Prosecution and Partnerships. So far, we have been focusing on prevention through education and awareness by training different stakeholders in the field including media, civil society organizations, and other sectors. We have organized more than 20 events including training journalists in six different cities. In addition, we are creating an online platform with a mobile app for people to be able to report cases of trafficking online and we are training a group of lawyers to take these cases to the court. We are currently working on moving towards protection and prosecution after training experts and preparing a center for services. In 2017, we trained 19 trainers and launched a nationwide youth-led movement against trafficking. The training was on different aspects related to the crime including laws, collaborations, how to identify potential victims, reporting, first contact with survivors, and the different forms of trafficking.

What are the challenges to end violence against women and girls in the Arab States region?

In some cases, leaders are not open to new views and changes in the system to achieve equality and end violence against women and girls. Other challenges lie in traditional cultural practices which lead people to believe that women are inferior. Women are subject to all types of psychological, verbal, physical, marital, familial, and economic violence because of these harmful practices that give men control and superiority over women.

What actions/measures do you think need to be prioritized to end violence against women in the region?

I believe two main measures should be prioritized in order to end violence against women; education and the implementation of an effective legal framework. Through formal and informal education, countries can change the mindset of students and build a new generation of children who believe in equality from an early age. Education could also be used in changing gender stereotypes and to train media professionals to do a more gender-sensitive coverage. When it comes to the legal framework, states should work harder on passing gender-sensitive laws that end all types of violence against women and girls and they should make sure to provide mechanisms for the implementation of these laws. Laws won't be effective if they are not implemented.

In your opinion, what should be the role of youth in ending violence against women and girls?

Youth have the power to achieve the change that we all want to see. When it comes to ending violence against women, it is very crucial for youth to be involved in all aspects of decision-making and implementation. Youth have the energy, passion, vision and innovative thinking to bring about real change in every aspect of life including education, policies, partnerships, laws, and civil activism.