In the words of Rajaa Altalli: “Women are leading efforts to push forward in Syria” 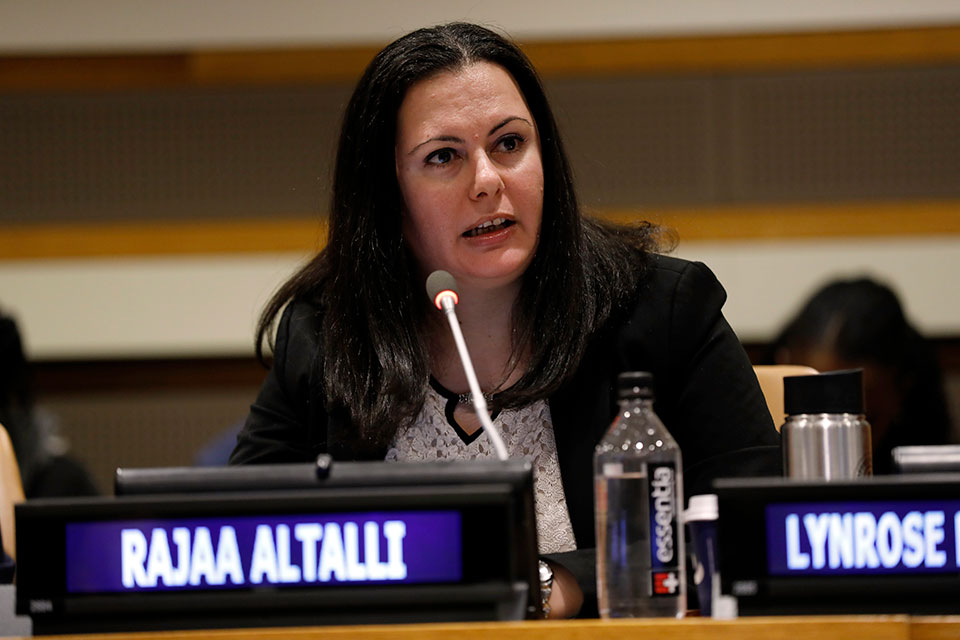 Rajaa Altalli, member of the Syrian Women’s Advisory Board, speaks at the UN on women, peace and security issues. Photo: UN Women/Ryan Brown

Rajaa Altalli is a member of the Syrian Women’s Advisory Board (WAB), established by the UN Special Envoy for Syria to ensure that women’s perspectives and leadership is taken into account in the peace process. Altalli was 12 years old when her father was arrested by the Syrian government for being part of a political party. She thought she would never be involved in public life because “it was too costly for one family to have more than one person arrested.” In 2007, Altalli was working on her PhD in the USA, as the Syrian revolution began. She could no longer stand and watch the crisis unfold. She started documenting human rights violations, first at detention points, and eventually moving to Turkey to continue working with Syrian refugees in the region. In 2011, she co-founded the Center for Civil Society and Democracy, a Syrian NGO working to strengthen community engagement and advocacy for peace in Syria. Altalli attended the 2018 UN Security Council Open Debate on Women, Peace and Security and spoke at the Multi-stakeholder Forum organized by UN Women, the Swedish Ministry of Foreign Affairs and the NGO Working Group on Women, Peace and Security.

At least 50 per cent of the population is displaced either internally or outside the country. People are exposed to violence every day. Yet, you would be amazed how many Syrian women have stood up for their families and communities.

Ever since we established the Center for Civil Society and Democracy, our core programme has been ‘Women for the Future of Syria’. We knew that there’s no bright future for Syria if women are not shaping the country’s future. One of our key initiative is about building Syrian women’s capacity. For instance, our women empowerment programme links together knowledge, skills and relationships, because it’s important to have knowledge and skills, but you also need to build relationships with the community and service providers. And unless you provide a legal framework, protection and resources for women, how will they apply the knowledge, skills and relationships?

Women are capable, and they are doing what they need to do to help their country, but the space in Syria is shrinking for civil society, especially for women. There’s a need for spaces for collaboration for different [and diverse] Syrian women to sit down together and discuss how to move forward with the peace agenda.

Syrian women have called for at least 30 per cent women in the Constitution Commission—a commission that will draft the new Constitution. Women have also played a huge role in making sure that safe spaces are there for women, girls and civilians in general. They are helping their family and community by providing services and making sure those services are going to the right people.

Women are leading efforts to push forward, but also asking for more stability. They are pushing for political transition towards democracy in Syria, which is very promising, but they are risking their lives to tell the truth.

The determination of Syrian women always makes me hopeful for the future. Sometimes, the needs are very, very big and the expectation [from us] is even bigger. I want to do more, I need to do more, but I don’t have the capacity or resources to do more.”

Related News
19/10/2018
In the words of Tanya Gilly Khailany: “When it comes to women’s rights, there’s no room for diplomacy”
20/08/2018
The Road towards a National Action Plan on Women, Peace and Security for Lebanon
25/07/2017
From where I stand: “Women have to be at the heart of the Africa of tomorrow”
08/12/2022
Call for proposals: Partners for Elements of UN Women Lebanon’s Thematic Area Women’s Political Participation (WPP)
14/11/2022
Hania Boukhrais: Despite the violence, I will continue my municipal work
END_OF_DOCUMENT_TOKEN_TO_BE_REPLACED