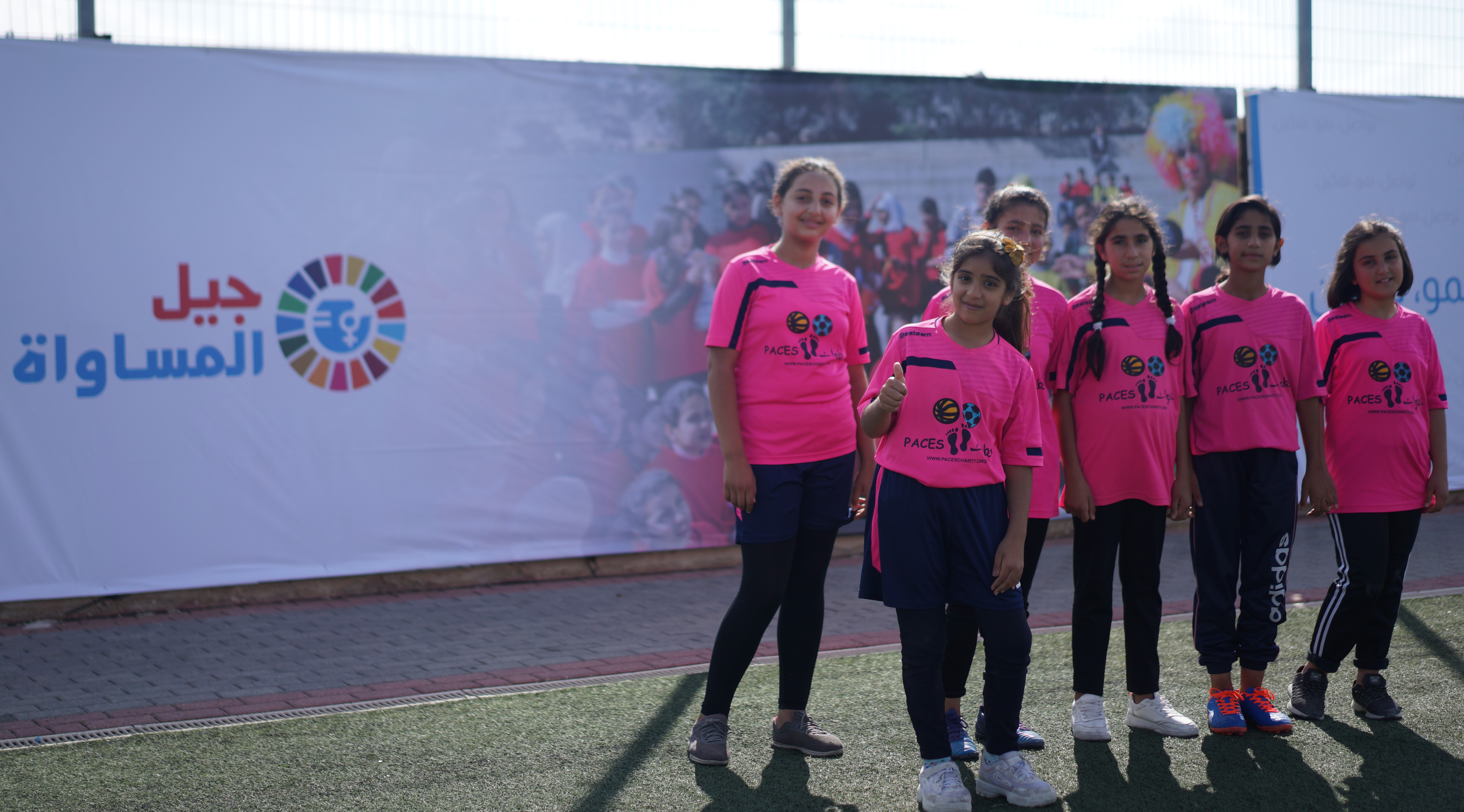 UN Women, PACES Charity, and UNICEF organized a one-day sports event in Ramallah, Palestine, to raise awareness on the importance of promoting gender equality in every aspect of life, including sports, within the framework of UN Women’s “Generation Equality” campaign, as well as the global celebration of the 30th anniversary of the Convention on the Rights of the Child.

On the occasion of the International Day of the Girl Child (11 October), a one-day sports event engaging over 250 girls and boys took place in Ramallah, Palestine.

The event was celebrated under the Generation Equality campaign, a new multigenerational initiative by UN Women to celebrate the 25th anniversary of the Beijing Declaration and Platform for Action, the most visionary agenda for women’s rights and empowerment everywhere. The event was also part of the global celebration of the 30th anniversary of the Convention on the Rights of the Child.

Thirty years ago, world leaders made a historic commitment to the world’s children by adopting the United Nations Convention on the Rights of the Child (CRC) on 20 November 1989. This international agreement, signed by the Palestinian Authority in 2017, is now the most widely ratified human rights treaty in history and has helped transform children’s lives around the world.

Globally, more girls and women are participating in sports than ever before. Despite these gains, however, Palestinian girls and women still face difficulties due to traditional gender norms discouraging women and girls wishing to play sports.

The event aimed to galvanize attention and action to equal participation of girls and boys in sports and make sports more accessible to all. During the celebration, Palestinian girls and boys from across Palestine played mini football matches. The young participants also enjoyed fun activities including face painting, dancing, and photo shooting. In addition, famous Palestinian female football player Ayat Saafeen invited as a keynote speaker, delivered an inspiring message on how all women and girls should have the right to enjoy equal participation in sports. 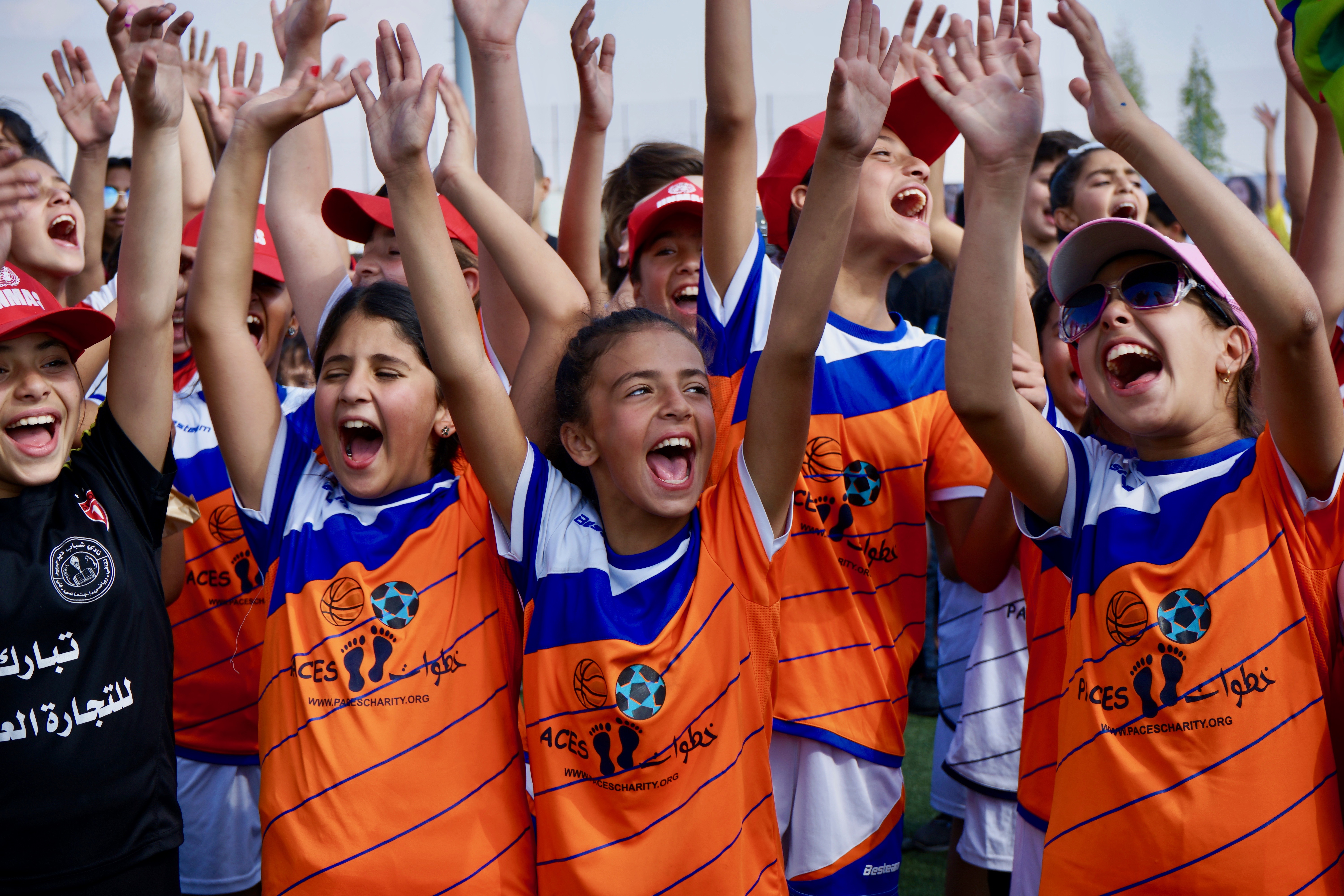 Ms. Maryse Guimond, UN Women Special Representative for the State of Palestine, welcomed the participants saying “Both boys and girls should be able to take part in all sport and be supported in achieving their full potential. With the Generation Equality campaign, UN Women aims to accelerate progress on gender equality, including in sport and to mark the 25th anniversary of the Beijing Declaration and Platform for Action. In Palestine and across the world, women and girls are leveling the playing field, both in sport and beyond.”

Ms. Darin Hussein, PACES Palestine Country Manager addressed the participants in the welcoming speech saying “We are pleased to be part of this celebration which sheds light on one of our organization’s key objectives, which is to provide equal opportunities for girls and boys in sports. Realizing the great social and developmental impact of sports on children, PACES has been providing marginalized boys and girls with healthy, structured after-school sports programs since its launch in 2006; and we are proud to be able to benefit over 4,000 children in Palestine, 50 per cent of which are female, every year.”

Ms. Genevieve Boutin, UNICEF Special Representative for the State of Palestine said “2019 is the 30th anniversary of the Convention on the Rights of the Child – the most widely ratified international treaty. It is fitting then that International Day of the Girl this year focuses on a girl’s right to play and recreational activities, as this forms Article 31 of the CRC. Play, sports, and recreation are not only rights but are also powerful ways to enable children to grow up to be well-rounded and active citizens. Every child in the Gaza Strip and the West Bank, including East Jerusalem, irrespective of background or circumstance, should have an equal chance to fulfill their potential. The opportunity to actively participate in recreational activities is fundamental to this.”

On the 25th anniversary of the Beijing Declaration and Platform for Action - the most visionary agenda for the human rights of women and girls, everywhere, UN Women’s “Generation Equality: Realizing women’s rights for an equal future” campaign demands equal pay, equal sharing of unpaid care and domestic work, an end to sexual harassment and violence against women and girls, health care services that respond to their needs, and their equal participation in political life and in decision-making in all areas of life.

PACES Charity was established in 2006, with the aim of providing healthy, structured after-school sports programs for Palestinian girls and boys ages 7-16 years living in refugee camps and most marginalized areas in Palestine, Jordan, and Lebanon. Since establishment, PACES has served over 30,000 children, 2,000 young female and male coaches, and over 100 local sports clubs in Palestine, Jordan, and Lebanon. All PACES programs promote gender equality and have successfully reached and maintained a 50 per cent female participation rate.

This document was edited with the free version of the instant HTML converter tool. Try it here and use it every time for your projects.