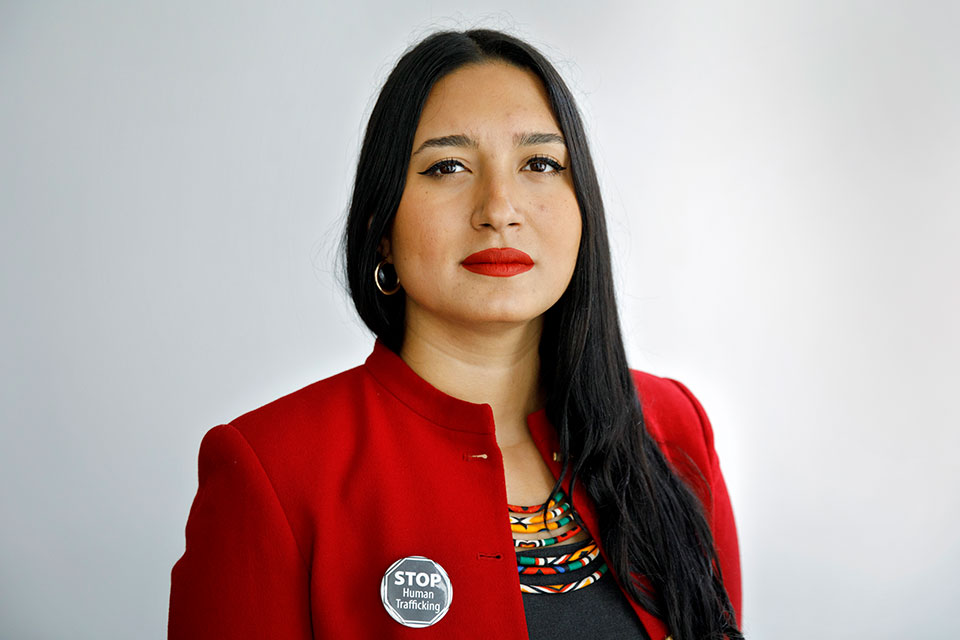 I am Generation Equality because...

I want to create a better world where everyone is living equally and is respected, regardless of their gender, sex and sexual orientation. I can’t believe that we are in the 21st century and we are still fighting for gender equality. We have to smash the patriarchy!

Three actions you can take today to stop human trafficking:

I am half Syrian and half Tunisian, born and raised in Dubai. Growing up in a conservative society, I realized how men around me, even my brothers, had the freedom to live their lives as they wanted, but it wasn’t the same for me or other girls. I felt the urge to resist since I was child. I wanted girls to have the power to live their best life.

When I got a scholarship to study in England and needed some extra money, I applied for au-pair jobs online. I started receiving offers from potential families. They said, we love your profile, come as soon as possible, send your paperwork and the lawyer will take care of everything. When I asked to video chat with the family, the children I was supposed to look after, they said they were too busy. I knew something was wrong.

I was privileged, I had access to education and internet. I researched online and saw the horror stories of how girls of all ages are trafficked. But millions of girls are living in the dark, especially in rural areas where there’s no access to internet and they don’t even know the risks. I focused my Master’s degree research on the issue of trafficking of women and in 2016, I set up the first anti-trafficking organization in Tunisia.

“I want girls to have the power to live their best life.”

In the Arab region, not many countries are addressing human trafficking. Tunisia now has the anti-trafficking law and the National Committee against Trafficking in Persons. Egypt has some organizations that work on the issue, and some work is happening in Jordan and Lebanon. Although there are millions of victims, I don’t see a sense of urgency to prevent this crime.

Taking action, everyone has a role

The biggest problem of human trafficking is the lack of awareness. Every day, you may be crossing paths with a victim, but you can’t identify her because you don’t know how to read the signs. Many survivors I met knew something bad had happened to them, but they didn’t have a name for it.

Human trafficking should be a topic that’s taught in schools, it should be talked about in the news. It is one of the most profitable crimes and the numbers are rising.

Young people can do a lot to take action against human trafficking. Don’t sit and wait for something to happen. First, reach out to an organization in your local community and support their efforts. Urge your governments to ratify the Palermo Protocol and create their own national or local laws that respond to the issues of human trafficking in their local context.

Racha Haffar, 30, is an award-winning women rights activist from Tunisia, and the founder and president of ‘Not 4 Trade,’ the first anti-human trafficking NGO in Tunisia. She is member of UN Women’s Beijing+25 Youth Task Force.

More “I am Generation Equality” stories ►