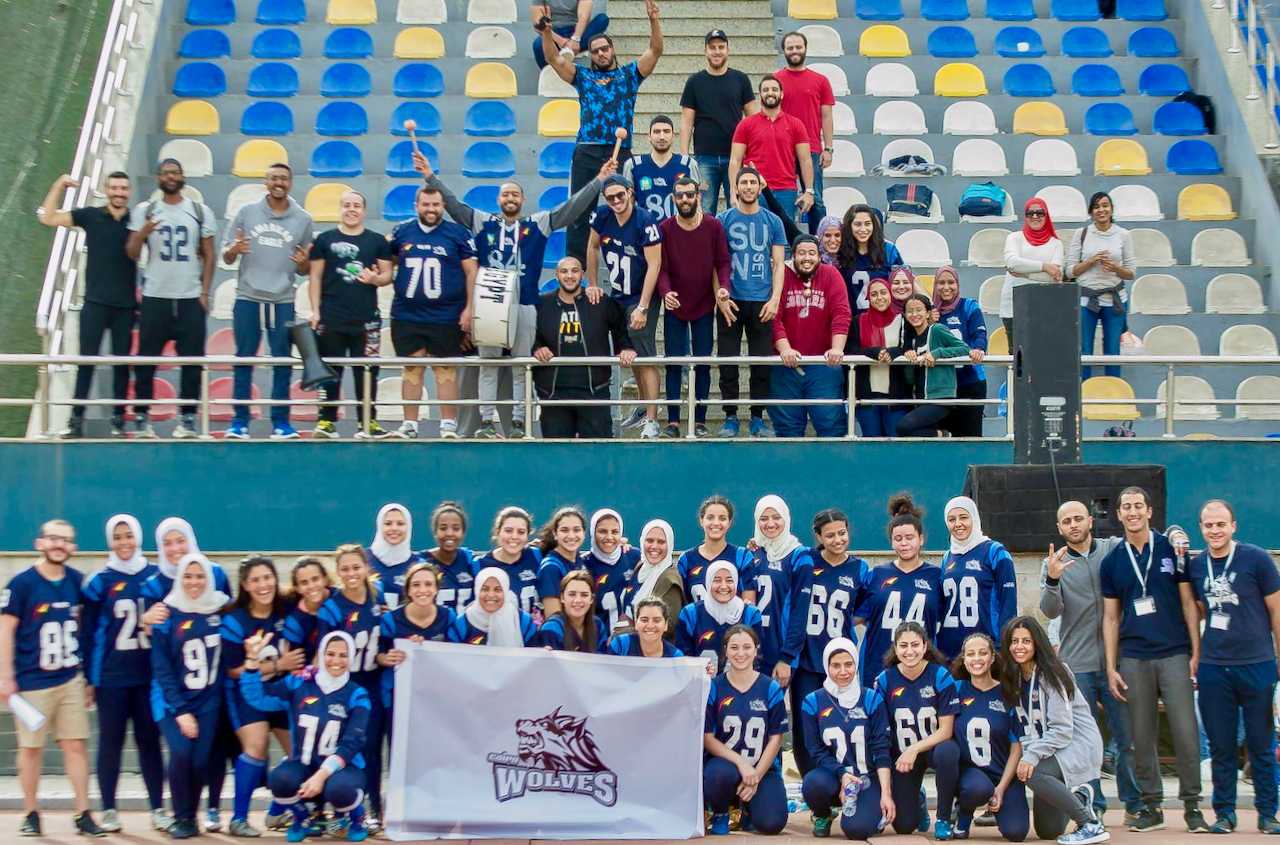 The Cairo SheWolves is one of the first all-women American football teams in Egypt. Photo: Courtesy of the Cairo Wolves.

Gender norms and stereotypes prevail throughout Egypt, even in its bustling capital Cairo. It’s here that a novel project, an all-women American football team— is challenging gender norms in sport.

Speaking to UN Women about the Cairo SheWolves, Ziad Gaafar Mohammed, coach of the women’s American football team in Cairo’s Dokki and Mohandeseen neighborhoods, talked about the team’s challenges and exciting progress.

“The SheWolves team was founded in 2016. But after doing so, we ended up playing the first women’s American football game in Africa. And we won the league championships in December 2016.”

“At first, people in the community were saying it’s not going to work out for women to play American football. They’re traditional. People nowadays often have stereotypes that women deserve to just stay at home and do the cooking and washing. They’re not used to see women succeed in all fields [like men]. But actually [these women] conquered American football.”

The incremental acceptance of the SheWolves American football team, said Ziad, is owed in large part to his and his colleagues’ conscious efforts to bring in the support of the male teammates from the SheWolves’ partner team, the Cairo Wolves. Male footballers have contributed significantly to efforts to change views in Cairo on women in sports.

“The mutual support has grown so much. I see the change all the time. We used to have to tell the men to support their female teammates, to attend their practices and matches. But after seeing how good the women are and bonding with them, they come themselves. Now, when one of the members of the men’s team is not attending the women’s matches, his teammates call him and ask why he’s not coming, encouraging him to join. When one of them can’t make a practice or match, he contacts the others on our WhatsApp group asking for constant updates on the score.”

Allaa Aboughaly, 22, is a defensive linebacker on the Cairo SheWolves. She’s also the team’s general manager. Allaa said that when she first decided to join the team in March 2017, she faced resistance from her parents, who didn’t want her playing a contact sport. But the flame of her desire to play had already been sparked.

“I watched a highlights video online of the [SheWolves] girls playing. They were charging through the field and being courageous, and I immediately said to myself, ‘I want to be on that team.’”

She noted that the support of the men on the Cairo Wolves has been essential to keeping her and her teammates’ morale high. “The men come to every game. They bring us water and snacks. They cheer from the stands. Some of them attend our practices and help to set up drills and coach us. They’re like brothers to us.”

Because of the confidence playing on the SheWolves team has given her, Allaa finds her attitude towards all kinds of gender inequality changing. She noted a recent instance when her tolerance for the frequent street harassment she receives reached its limit. “Before joining the team, I used to ignore the men on the street. Two or three weeks ago, I was walking down the street getting harassed. This time I challenged the harasser. He was scared of me, and said, ‘I’m sorry.’ A guy from the team tried to help me in confronting him too. The men have been really helpful.”

The teams have been part of UN Women’s ‘Because I Am A Man’ campaign, which seeks to illustrate the positive role of men in achieving gender equality while correcting the negative perceptions on masculinity. They’ve attended a ‘Because I am a man’ ceremony held by UN Women, and Ziad noted that UN Women is active in promoting the teams on social media, the primary means of publicity and recruitment for both teams.

Proudly, Ziad proclaimed that one of the largest signs of growing attitudes of acceptance around women and sports in Egypt is local in media attention.

“The relation between sports and gender equality cannot be underscored enough. Particularly with regards to a non-conventional sport such as American Football, in which “Shewolves” is engaged as one of few female teams accredited by the national federation” says Rasha Abouelazm, Project Coordinator of UN Women’s ‘Men and Boys for Gender Equality’ programme in Egypt.

“It sheds an important light on the men and women collaborating within teams, players and coaches, fathers and husbands, who collectively challenge a stereotype and offer an alternative discourse and best practice that gives strength the engagement of men and youths in achieving equality.”