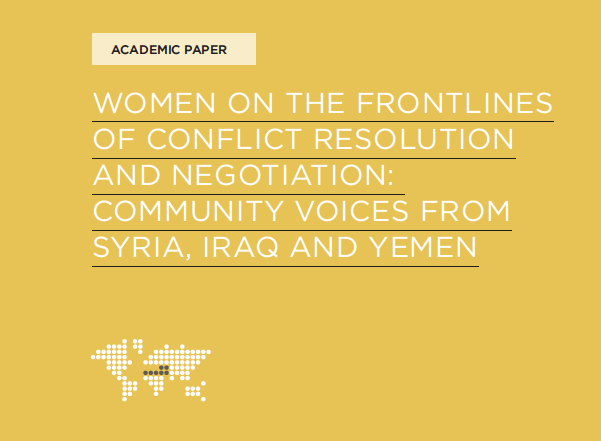 New report by UN Women looks at how women in the region influence and shape local processes for conflict and dispute resolution.

While the Syrian crisis did not stem from a movement for women’s empowerment, women organized and led marches, and were highly visible in media and advocacy efforts. They also participated in local coordination committees and groups that engaged with international news outlets to raise awareness about the situation in Syria abroad. However, the intensification of armed conflict gradually diminished women’s public presence and participation in the crisis.

While Syrian women’s direct participation in UN-mediated peace negotiations has been limited, women and women’s initiatives have focused on social cohesion, ceasefires, mediations and negotiations in their communities across Syria and the region among the refugee communities. Women and local peace actors have played instrumental roles in rebuilding social peace and cohesion in their own communities. Their efforts have included leading and coordinating humanitarian and relief initiatives, building educational systems, participating in local governance and providing livelihood opportunities to women, including those who have been displaced by conflict. Such contributions are especially significant considering the limitations placed on women’s public and community participation.

Damma, Arabic for “Embrace”, a Syrian women organization, used all of the resources and opportunities within their reach to halt hostilities and prevent further loss of life in Zabadani, a city close to Damascus. This included bargaining a deal to create a civilian safe zone in the area, which resulted in a rare, yet ultimately unsustainable, level of mutual acceptance from both sides of the conflict.

The group went on to engage state and non-state security actors on allegations and charges made against local women, successfully refuting many of them. Through these and other efforts, the organization earned influence and credibility in the area, so much so that its effort to bring about a ceasefire agreement between the government and opposition groups was endorsed by more than 400 women. Beyond offering insight into the experiences of Syrian women who sought to directly resolve and negotiate violent conflict, the organization’s history reflects a larger narrative about the triumphs and challenges faced by civil society – and women’s place within it – over the course of the war.

Read more about how other women in the region are helping resolve conflict in their communities.