Take Five: “Our goal is for childcare services in the workplace to be recognized as a public good” 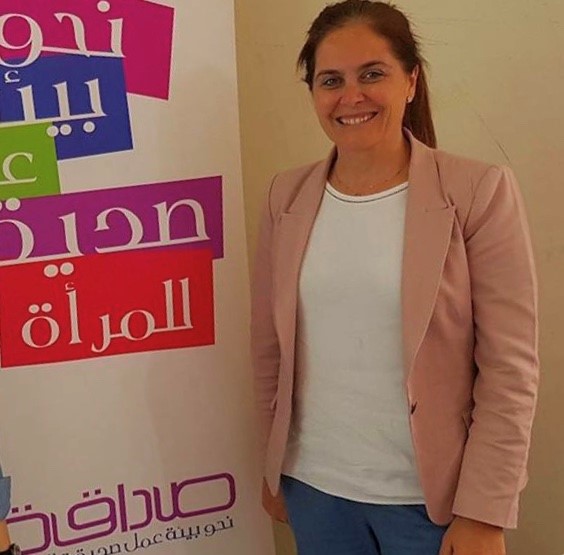 Randa Naffa is a community organizer and founding member of SADAQA—an NGO dedicated to empowering Jordanian women in the workplace that has directly contributed to establishing more than 90 workplace childcare centres. SADAQA is now working in partnership with UN Women to promote women’s participation in the labour market through enhanced legislation and enforcement, as well as by increasing accessible transportation and childcare services in the Southern Governorates of Jordan and in East Amman. This contributes to the regional programme “Strengthening the Resilience of Syrian Women and Girls and Host Communities in Iraq, Jordan and Turkey”—implemented by UN Women and the European Union under the EU Regional Trust Fund in Response to the Syrian Crisis (the EU MADAD Fund).

Why did you choose to focus on women’s access to workplace childcare services?

The lack of reliable and affordable childcare centres represents one of the main challenges faced by women and working parents. Jordan has one of the world’s lowest female economic participation rates, ranking 138th out of 144 countries on the World Economic Forum’s Gender Gap Index.[1] Women’s unemployment in Jordan stands at approximately 33 per cent, while their labour force participation rate has not exceeded 18 per cent in the past 10 years.[2] This represents a high cost for Jordan’s economy and an untapped human resources opportunity, as most women—especially youth—are highly educated.

Studies have identified the lack of childcare as one of the three main barriers women face in entering Jordan’s labour market, followed by the lack of public transportation, and low pay or pay inequity.[3] Jordan lacks an efficient, accessible and safe transportation system, which is particularly challenging for women who need to commute long hours. The absence of a legal framework to guarantee equal pay also has serious repercussions, with the pay gap reaching 42 per cent in certain sectors. But certainly, studies show that the number one barrier for educated women with children to enter and remain in the workforce is the absence of childcare in their workplace.

Are there any laws in place to extend access to childcare centres?

Yes. Article 72 of the Labour Law stipulates that any employer with at least 20 female employees, with 10 or more children under the age of 4, should provide suitable childcare in the workplace. However, lack of enforcement, awareness, or simple non-compliance forces the majority of working mothers to stay home to take care of their children and other family responsibilities.

The cost of setting up and running an on-site childcare can also be a barrier for small- to medium-sized companies, which constitute 98 per cent of businesses in Jordan. Two-thirds of them have fewer than 19 employees[4], and are thus not bound by the law.

How well are companies who are bound by the law complying? Are there alternatives?

Some larger companies that remain non-compliant with Article 72 consider childcare both a financial burden and a liability, and would rather offer monetary compensation to women employees for childcare services. Parallel to this, insufficient enforcement measures by the Ministry of Labour to monitor compliance and a lack of public incentives for companies (such as tax reductions or other procedural facilitations) have resulted in limited workplace childcare centres. Some workplaces simply don’t have a suitable space for a childcare centre.

That’s why our organization, SADAQA, is introducing alternative models to support companies to become compliant with the legislation, including: joint day cares, contracting with neighbouring childcare centres, enhancing the quality of home-based childcare, and a suggested subsidized national childcare programme. These models will help ensure that all working parents benefit from the law, by providing quality service and a safe environment for the children of working families, while at the same time making sure incentives are provided for employers.

What role can such services play in supporting women’s workforce participation?

Based on our research, workplace childcare offers multiple benefits for women. They help women overcome social and psychological pressures associated with leaving children behind. They limit the use of leaves-without-pay or vacation time to care for children at home, thus boosting household income. They help minimize transportation costs while providing children with quality care for their emotional and social growth. Naturally, women’s performance, and their career paths, are boosted considerably by such incentives, further promoting women’s access to leadership positions.

Childcare services can also benefit employers in terms of job satisfaction and reduced staff turnover. A study conducted by SADAQA in 2016 found that the average return of investment for an employer who invests in childcare services is USD 73.5 (JD 52.2) per employee per month, or the equivalent of USD 882 (JD 627) per employee per year, which indicates that companies could save approximately USD 1 million (JD 736,000) per year[5], from salary savings as a result of these non-monetary employee benefits. This estimate excludes the benefits that could be generated from reduced employee turnover and unpaid leave, and excludes the increase in productivity.[6]

Childcare centres in Jordanian workplaces were nearly non-existent seven years ago, before the establishment of SADAQA. Our goal is for childcare services to be recognized as a public good.

How will your partnership with UN Women help to address women’s needs in the field?

Within the framework of the European Union’s Regional Trust Fund in Response to the Syrian Crisis (the EU MADAD Fund), UN Women and SADAQA will work with employers who are committed to setting up workplace childcare centres in Amman and the southern governorates to provide knowledge, incentives and technical support.

In addition, SADAQA will establish a one-stop shop for registration of workplace childcare centres at the Ministry of Social Development, to ease and accelerate the process. This will be paired with the development of a systematic inspection plan by the Ministry of Labour to oversee compliance with Article 72.

UN Women and SADAQA will also support women and community-led solutions for accessible transportation services in the south of Jordan, including raising awareness on the issue among employers. SADAQA will establish a national framework to promote gender-sensitive transport systems, to be used as an advocacy tool.

[5] The estimates cost savings of JD 736,000 per year were calculated by multiplying the value of childcare services per employee per year by the average number of employees working in a company from the telecommunications sector, on which the study was performed.