In Jordan, women travel off the beaten path to new professions

Hiba Varouqa, a 28-year-old graduate of Jordan’s Applied University College of Hospitality and Tourism Education (JAU), is the proud owner of the company Trip 4 Jordan. 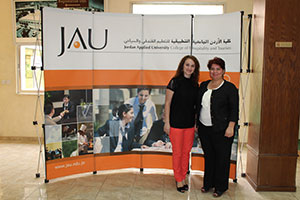 “I have always wanted to be part of the [tourism] sector. I knew about the challenges I was going to face but it was my dream. While I was studying, I started working in a travel agency; first as a secretary, then I became a reservations officer, an assistant and, step-by-step … I am now Manager of my own business,” she says.

Success stories like Hiba’s help raise awareness of gender equity issues and encourage new students to enroll. Her University is one of UN Women’s partner institutions in Jordan and one that will receive the Gender Equity Seal this October 2013.

This comes as part of UN Women’s on-going efforts to empower women in the tourism sector. An agreement was recently signed with the Ministry of Tourism and Antiquities to introduce equal opportunity employment through the application of the Gender Equity Seal Model to tourism-related businesses and institutions in Jordan.

Tourism accounts for about 13 per cent of GDP  in Jordan, and the Government has made a commitment to increase women’s participation in the tourism sector from 10 to 15 per cent by 2015. UN Women is working with diverse partners to implement the Gender Equity Seal, a voluntary certification for businesses that adhere to certain standards of gender equality, including hiring, training and promoting women. Ten Jordanian organizations have received it since 2012.

Striving to boost gender equality, the certification aims to put in place policies and practices that enable equal opportunities for women and men to gain access to jobs, opportunities, working conditions, as well as professional development, training and participation in decision-making processes.

“I know I am lucky because my family and friends always encouraged me to study and pursue my career. Now I am married and I have a little son and I am grateful because my husband also keeps supporting me,” says Hiba. 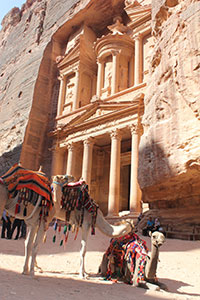 The “Treasury” is one of the most frequented tourist sights of Petra, Jordan. Photo:Maria Fanlo

According to the Global Report on Women in Tourism 2010, tourism provides better opportunities for women’s participation in the workforce, women’s entrepreneurship, and women’s leadership than many other sectors of the global economy. According to ILO data, women make up between 60 to 70 per cent of workers in the industry.

However, their situation is far from ideal as they tend to earn less than men and few of them occupy managerial posts: women in tourism are still underpaid, under-utilized, under-educated and underrepresented. Yet tourism does offer certain opportunities with women comprising a much higher proportion of independent workers than in other sectors.

But challenges persist. Archeologist Sharifa Nofa Bint Nasser, Director of The Jordan Museum and one of Hiba’s mentors, recalls that in 1996, when she decided to start her career, tourism-related jobs were seen as shameful. “Through the years, I have seen the changes but still there is a lot to do and a lot of mentalities to change.”

While tourism has undoubtedly taken a blow in recent months in the Arab States, Hiba says she is hopeful for the future. “Due the political situation in the region, tourism is not like it was before, but I believe that in 2014, things can get better. I am working hard to bring tourism to Jordan. I am doing my best to keep the business going.”

At the global level, UN Women and the World Tourism Organization (UNWTO) have been working together since 2008 to implement a joint programme that aims to foster gender equality and women’s economic empowerment in the tourism industry.