In the words of Madina Mousa: “I could not stay idle in the face of hardship, I became a Protection Specialist empowering other Syrian refugee women and girls.” 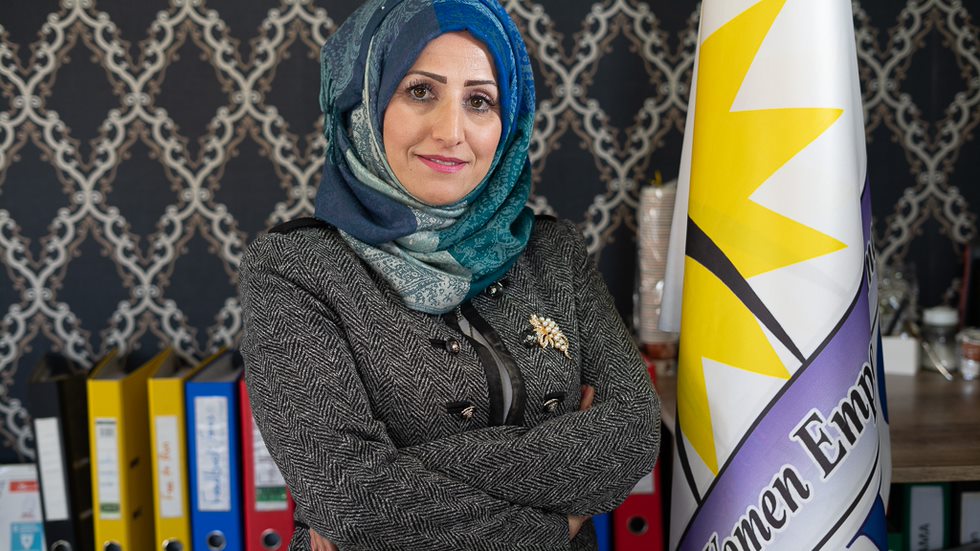 Madina Mousa is a Syrian refugee who fled the war in Syria with her family and now lives in Kawergosk Refugee Camp in the Kurdistan Region of Iraq since 2013. She started her career as a volunteer to help other refugees and is now a Protection Supervisor at the Women’s Empowerment Organization (WEO). WEO is working in partnership with UN Women on the Regional Programme “Strengthening the Resilience of Syrian Women and Girls and Host Communities in Iraq, Jordan and Turkey”, funded by the European Union under the EU Regional Trust Fund in Response to the Syrian Crisis (the EU MADAD Fund).

I had just finished my final exams at the Faculty of History when the war reached our city in Northern Syria, destroying our dreams and plans for the future. My family and I had to flee, leaving everything behind. We crossed the border into Iraq to seek safety in the Baserma Refugee Camp, along with thousands of other refugees.

The situation in the camp when we first arrived was terrible. The misery of displacement was daunting. But I wanted to help my family and those around me. I could not stay idle in the face of hardship. I had to do something. I started looking for volunteer work with local and international organizations, which came to the area to help refugees. Having left behind our documents, I had no proof of my education level which made my quest for work very difficult. Finally, the Women’s Empowerment Organization (WEO) accepted me as a volunteer on the basis of a student ID card that I had brought with me.

I started volunteering at WEO in 2013 along with 179 other people, both men and women. We underwent trainings on different issues that help to empower women, including psychological and legal support as well as livelihood and work opportunities. The overall objective was to alleviate the hardship of displacement on women and their families. After two months as a volunteer, I was very lucky to be selected along with 19 other women and men to work as staff members at WEO. I became a social researcher and started conducting regular visits in the Kawergosk Camp where I also live with my family. Being part of the refugee community facilitated my work. I listened to women speaking about their lives as refugees, and the problems and challenges they face on a daily basis. Their suffering increased my motivation and determination to help them overcome obstacles and improve their lives. I reported the findings of my visits to my colleagues at WEO to guide our operations in responding to their most urgent needs.

Three months later, I became a women’s empowerment lecturer, talking to the camp’s residents about how women can empower themselves to cope better with displacement through training and work opportunities as well as psychological and legal aid.

Thanks to the project “Strengthening the Resilience of Syrian Women, IDPs and Host Community in Iraq,” which is supported by UN Women and funded by the EU Regional Trust Fund in Response to the Syrian Crisis 'Madad', I became a trainer of trainers on women’s empowerment and gender-based violence in the Baserma and Kawergosk Refugee Camps in the Kurdistan Region of Iraq. I ran several projects, ranging from sewing courses to advocacy against gender-based violence.

I have been a Protection Supervisor since 2016, focusing on gender-based violence, early marriage and child protection. My team and I are now always present in the camps speaking to both its residents and managers. One of the major protection issues facing girls in the camp is early marriage which has been aggravated by war and displacement. For economic and security reasons, many families choose to marry off their daughter at a young age. Our specialists work hard to inform the camp’s residents of the negative medical, legal and psychological impact of early marriages on girls and their families.

Because we want our work to be driven by the needs of the refugees and displaced, we have created a suggestion box. For example, based on suggestions we received, we launched a campaign to combat violence against women, bringing men and women together. We have changed the way we deliver our training in accordance with the context and what people need.

We offer training courses on the basis of wishes expressed by the women themselves. We listen to them to know what they want. For example, one Syrian woman told me that she had always dreamt of becoming a tailor. We helped her get training and buy a sewing machine and she is now a tailor.

Being able to access training and jobs helps many refugee women to deal with many of the challenges they face and to improve their status in their families and community as a whole. This has made some refugee men come to us to ask for more courses like this for their female relatives, especially because many of them are unable to get jobs to support their families. To help more women follow our trainings and livelihoods programmes, we have created a children’s day care center run by our staff.

So far, through the Madad programme, our center has helped over 1,100 women with physiological and legal support as well as training and work opportunities. The skills that women learn through our programmes are life skills that not only empower them to cope with the hardships of displacement, but also to rebuild their lives and country when they eventually return.