In the words of Duha Mahdi: “We work to reduce violence against women and girls by providing support services to survivors” 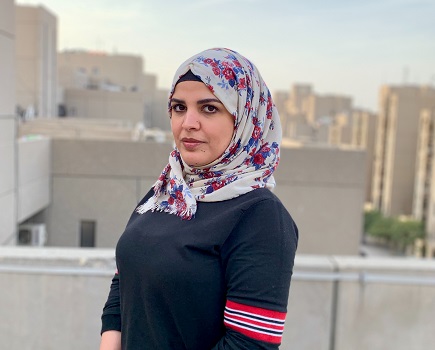 Duha Mahmood Mahdi works as a Project Manager at the Baghdad Women’s Association (BWA), an organization working in partnership with UN Women on the regional programme “Strengthening the Resilience of Syrian Women and Girls and Host Communities in Iraq, Jordan and Turkey”, funded by the European Union under the Regional Trust Fund in Response to the Syrian Crisis (the EU MADAD Fund).

"Gender-based violence is prevalent in Iraq. According to 2018 data by UN Women and Oxfam, one in five women and girls aged between 15 and 49 years old were subject to physical domestic violence in 2008. The 2012 Iraq Woman Integrated Social and Health Survey (I-WISH) undertaken by the Ministry of Planning also reported high levels of exposure to gender-based violence, both within and outside the household. Seventy-three percent of women between the age of 15 and 45 reported that the perpetrator of domestic violence was the husband, followed by the father (53 per cent), then other family members (43 per cent). Thirty-six per cent of married women reported being exposed to at least one form of psychological abuse by their husbands, while 46 per cent of girls between 10 and 14 years of age reported being subjected to family violence.

The problem is compounded by local customs and traditions that define women’s roles only as housewives and subordinates to their fathers, brothers or husbands. Key decisions, such as getting married or working, can be taken on their behalf and even against their will. Women can also be victims of so-called “honor crimes” with impunity provided by law for the offender. Lack of protective laws makes combating gender-based violence in Iraq very challenging.

To support survivors of such violence and reduce its occurrence, we at the Baghdad Women Association (BWA) have partnered up with UN Women under the regional programme “Strengthening the Resilience of Syrian Women and Girls and Host Communities in Iraq,” which is generously funded by the EU Regional Trust Fund in Response to the Syrian crisis (the EU Madad Fund).

We work to reduce violence against women and girls by providing support services to survivors of violence and advocating for the implementation of protective policies and laws. We have established safe spaces in Dohuk and Baghdad to provide support to survivors and women who are at risk of gender-based violence. This includes psychosocial and legal aid, physical rehabilitation and referrals. The centers are based in accessible, secure locations close to public services. At these safe spaces, survivors of violence can benefit from psycho-social support provided by social workers and psychologists as well as legal counseling and representation provided by experienced lawyers. We also help women obtain civil documents such as IDs, marriage and birth certificates, etc.

I strongly believe in the importance of involving the community including men and boys in issues of women’s protection to minimize the risk of gender-based violence. To this end, we have developed connections with stakeholders in the community, including local authorities, security forces, police stations, health centers, schools and traditional leaders. These stakeholders support our work by identifying and referring cases of women and girls to get help at one of our safe spaces.

To reach more women and girls, we have promoted our safe spaces in local shops, markets, beauty salons, health centers, etc. We have also made home visits to known and respected women in the area where we work to raise their awareness and get their support for our mission. We also have a hotline operating 24/7 which has proved helpful for women who are particularly vulnerable and we use popular social media platforms such as Facebook to reach out to more women and girls.

To increase the appeal of our centers and because we firmly believe that the economic empowerment of women is key to addressing gender-based violence and achieve equality, our services include training in skills and professions such as sewing, cooking, literacy, English and hairstyling. For example, the cash-for-work activity in Duhok and the distribution of small grants to women in Baghdad have generated interest and brought more women to our centers.

Since we started last year, we have helped 1,553 women in Duhok and Baghdad. By the end of 2019, our team will have helped 2,800 women with services and referrals. We still have a long way to go. Beyond helping survivors, we are working tirelessly to change the prevailing norms and traditions that perpetuate violence against women in Iraq as well as to activate laws to prevent this violence and punish offenders."