Press Release: Ahead of the Brussels III Conference, the European Union, UN Women and UNFPA call for stronger measures to address the needs of Syrian women and girls 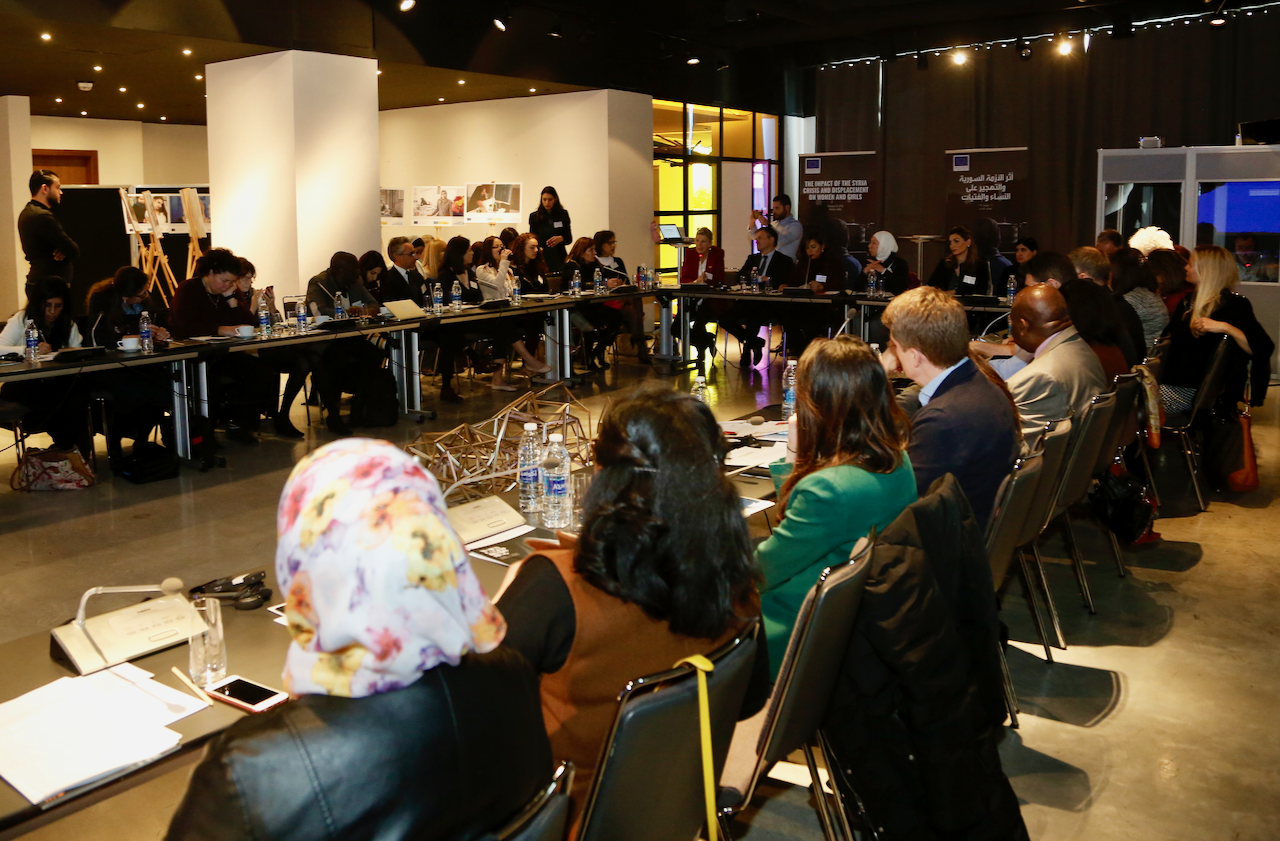 Government officials and civil society representatives from Jordan, Lebanon and Iraq at the High-level meeting “The Impact of the Syria Crisis and Displacement on Women and Girls” held in Amman, Jordan. Photo: UN Women/Nawras Alawneh

27 February, Amman.- As the international community prepares for the Brussels III Conference on Supporting the Future of Syria and the Region, the European Union (EU), UN Women and UNFPA organized a joint event that brought together government officials and civil society representatives from Jordan, Lebanon and Iraq to reflect on the impact the Syria crisis has had on women and girls, and to call for stronger measures geared toward their empowerment in refugee and host communities. The event, held in Amman, Jordan, aimed at highlighting the critical situation of women’s rights in the response to the Syria crisis as well as presenting recent research on women’s rights, gender equality and the Syria crisis (from inside Syria and in host communities) in order to inform the discussions at the Brussels III conference deliberations.

Now approaching its ninth year, the Syria crisis has long-since passed a tipping point in terms of cumulative impact and generational change, with women and girls bearing the brunt of the challenges. The event — held under the heading of “The Impact of the Syria Crisis and Displacement on Women and Girls” — broached a wide array of issues that continue to face women and girls inside Syria and in host communities region-wide, including the longstanding risk of gender-based violence, forced and early marriage, access to viable livelihood opportunities, and others. The event also saw officials and civil society representatives from the EU, Jordan, Lebanon and Iraq reviewing the progress on the commitments made by the international community and the challenges towards the protection and empowerment of women in refugee and host communities.

“The Brussels III Conference illustrates the international community's political, humanitarian and financial commitment to support the Syrian people as well as the neighbouring host countries,” commented Andrea Matteo Fontana, EU Ambassador to Jordan. “The European Union remains committed to helping the Syrian people inside and outside of Syria until a negotiated political solution brings a brighter future for all Syrians.”

The Brussels II Conference in 2018 recognized that sexual exploitation and abuse and gender-based violence were among the key humanitarian violations that Syrians endure as a result of the crisis. The conference also recognized the critical need to support job creation and integration into labour markets, for both refugee and host communities, especially vulnerable groups such as women. Nine years into the crisis, however, gender inequalities and gender-based violence continue to pervade the lives of women and girls, while women’s economic security remains elusive.

“Even as parts of Syria appear to be stabilizing, the impact of years of violence and displacement requires effective long-term strategies to address the needs of women and girls,” commented Luay Shabaneh, UNFPA Director for the Arab Region, who further underscored the importance of tackling prevailing negative coping mechanisms that often accompany displacement, such as restriction of movement and early marriage.

“The majority of Syrian refugees, including women, wish to return to their safe homes,” commented Mohammad Naciri, UN Women Regional Director for the Arab States. “But until safe and voluntary return is possible, we need to continue to focus on meeting their needs in displacement – needs articulated by them; to have jobs and decent livelihood and to feel protected and empowered.”