The League of Arab States, UN Women and UNFPA renew a shared commitment to address violence against women

The 16 Days of Activism against Gender-based Violence is an international annual campaign that begins on 25 November, the International Day for the Elimination of Violence against Women, and runs until 10 December, Human Rights Day. The aim of the campaign is to focus the world’s attention on the gross violation of fundamental rights that is a leading cause of death for women and girls in every country of the world. VAWG affects one third of all women globally. It is one of the most pervasive human rights violations, as women and girls experience it in all spaces: in the streets, on public transportation, at school, at work, and at home. In the Arab States region, 1 in 5 girls is married as a child, marital rape is not recognized as a criminal offence in at least 18 countries in the region, and in some countries a rapist who marries his victim can be exonerated.

During her opening remarks, Ambassador Dr. Haifa Abu Ghazaleh, Assistant Secretary General of the League of Arab States and Head of Social Affairs Sector emphasized the Arab League's interest in working towards the realization of women's rights, and that if women and girls - half of the potential of any nation - do not have equal access to quality education Job opportunities, health, re-employment, ownership, justice and leadership, that will deprive States of an active, sustainable and prosperous future.

“The violence women and girls experience in their daily lives is a structural result directly linked to underlying factors such as inequality and discriminatory social norms that value women’s contribution to our collective society as below that of men’s. Violence against women and girls is a major impediment to all forms of gender justice, and we must do our best to make sure its end,” affirmed Dr. Moez Doraid, Regional Director a.i. of the UN Women Regional Office for Arab States.

The event also was joined by Ms. Youssra, Egyptian actress and UNAIDS Regional Goodwill Ambassador for the Middle East and North Africa, who showed her support to survivors of violence in the region. "We must break misconceptions and beliefs that do not help rape survivors to carry on with their lives, and do not contribute to the elimination of rape nor do they help those living with HIV. Therefore, as a society, we must put the stigma in its place and condemn the criminal alone and support the survivors in restoring their right to the law - this is our right because this crime affects us all."

Ms. Janneke van der Graaff-Kukler, UN Women Deputy Regional Director briefed the meeting on the regional review process of the Beijing Declaration and Platform for Action and the Amman Declaration adopted by member States during the High-Level Conference convened in Amman on 28 November. The 11 areas of focus of the Amman Declaration included expedited “development of public policies and programmes to combat violence against women in the private and public sphere”. The document also stressed the importance of statistics and data systems to support the adoption and implementation of relevant national strategies.

The discussion at the LAS headquarters in Cairo came one day after the historic lighting of the building in orange, as part of the global “Orange the World” movement in support of the 16 Days campaign. The LAS headquarters joined other iconic buildings in the region, including Burj Al-Khalifa, Bibliotheca Alexandria and the Parliament of Morocco to symbolize a commitment to a bright future free from violence against women and girls. LAS building lit up in Orange to mark the 16 Days of Activism. Photo: UN Women/Mohsen Nabil

The event also included youth participants in the UN Women Gender Innovation Agora, volunteers engaged in the HerStory initiative, and UNFPA Y-PEER to present key messages on the commitment and engagement of youth from the Arab States to end VAWG.

Check out the photo album of the event here. 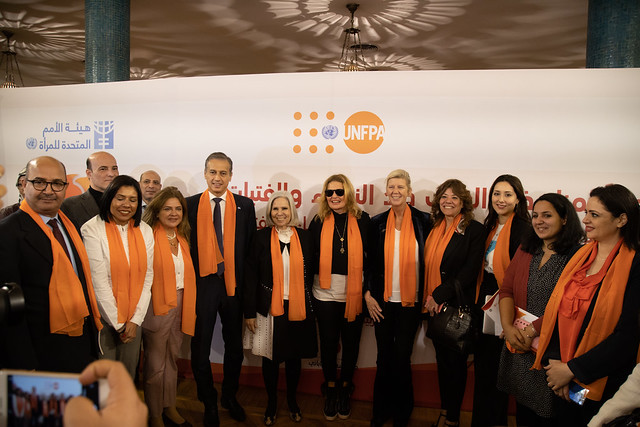