From Where I Stand: “I transformed into a new person” 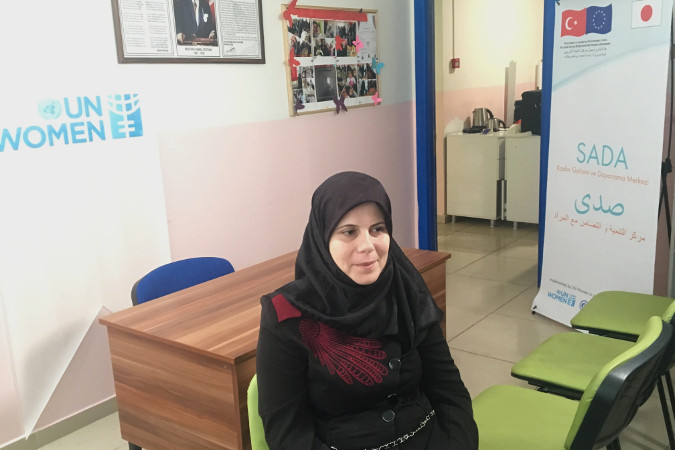 Zuke El Hasan* is a Syrian refugee who has been living in Gaziantep, near Turkey’s border with Syria, since 2016. She describes how the SADA Women-only Centre, which provides Turkish language, vocational skills as well as referral and psycho-social support to women in Gaziantep, helped her build self-confidence, learn new skills, and transform herself. The SADA Women-only Centre has been established by UN Women in partnership with the Gaziantep Metropolitan Municipality, with financial support from the European Union (EU) Regional Trust Fund in Response to the Syrian Crisis and the Government of Japan. The SADA Women-Only Center is serving refugee and host community women in Gaziantep since autumn 2017.

“I came to Gaziantep, Turkey with my husband and four children two years ago. When I first came from Syria, I felt very lonely. During the war in Syria, we started to feel afraid of communicating and interacting with others. When we came to Turkey, such a big and developed country, I was more afraid, especially of the Turkish community thinking that they might not want us. I didn’t go out and interact with anyone

My life took a turn when ASAM’s team (Association for Solidarity with Asylum Seekers and Migrants) visited my home and told me about the SADA Women-only Centre. The team informed me about the courses and activities of SADA, and I decided to apply for some courses. I’ve been attending the centre for one year, taking Turkish and computer operating classes. Learning Turkish is important for me as I want to communicate with the host community.

At the beginning, I thought bringing children to the centre would be a problem. It was the opposite. My children were welcomed and taken care of at the child-care unit. My younger daughter now speaks Turkish and she feels much stronger.

I also transformed into a new person, I’m more open and feel more comfortable. I can now communicate and interact with the Turkish community.

In the centre, there is a mixture of Syrian and Turkish women and we learn to be together. We talk and help each other when in need. This helps us integrate more easily. In addition to vocational and skills courses, we also get a change to participate in leisure activities. For example, we had a trip to Cappadocia, we visit museums and try Turkish restaurants. These trips change our mood.

Every Friday, Tomorrow’s Women Committee [a Syrian refugee women’s network] meet at the centre and, as Syrian and Turkish women, we discuss our common problems and try to find solutions. For example, we stopped some cases of early marriages and supported the girls to go back to school.

Most of us came here as depressed and broken people but we are going to leave as educated, informed individuals with new lives.”

Close to 2400 women and girls have registered with SADA Women-only Centre since September 2017 to benefit from vocational courses, language trainings and other services offered by the Association for Asylum Seekers and Migrants and the International Labur Organization, as UN Women’s implementing partners. El Hasan’s story relates to the Sustainable Development Goals on achieving gender equality and the empowerment of all women and girls ( SDG 5), on facilitating safe migration and mobility of people ( SDG 10) and promoting peaceful and inclusive societies for sustainable development ( SDG 16).