Access to housing, inability to speak in Turkish and employment are the biggest challenges for Syrian women in Turkey, finds new report

UN Women announces the results of a comprehensive needs assessment of Syrian women and girls under temporary protection status in Turkey. The assessment uncovers significant gaps in Syrian women’s empowerment and puts forth recommendations to shift gears. 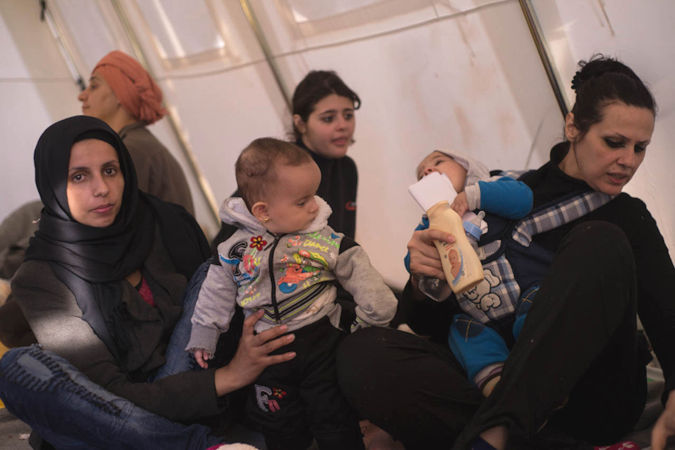 On 21 June, UN Women launched the needs assessment of Syrian women and girls under temporary protection status in Turkey in partnership with the Association of Solidarity with Asylum Seekers and Migrants (SGDD-ASAM) and with financial support from the National Committee of UN Women in Iceland and the Government of Iceland. UN Women and SGDD-ASAM presented the audience, which included partners from the government, civil society, academia and beneficiaries, with key findings of the needs of Syrian women and girls in Turkey. Following the presentation, a consultation with beneficiaries and stakeholders took place through organized roundtable discussions.

"While many countries in the EU and the US are closing their doors to asylum seekers, in Turkey our assessment found that Syrian women generally feel secure, but they face challenges to overcome poverty, access affordable housing and jobs," said Sabine Freizer, UN Women Governance, Peace and Security Policy Adviser for Europe Central Asia and acting Head of Turkey Office. She added: “To overcome these challenges, many Syrian women need Turkish language training, more knowledge about their rights to work and services, and access to better regulated and less expensive rented lodgings.” 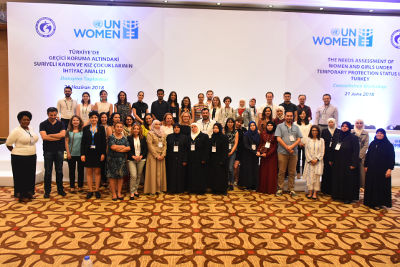 The study found that lack of access to employment opportunities puts Syrian women at risk of poverty and hunger. According to the data collected, only 15 per cent of women work in income-generating jobs. Almost half of all widowed women surveyed survive with monthly incomes around $160 (700 TRY), as do 36 per cent of divorced women and 32 per cent of single women. These women fall far below Turkey’s poverty and hunger
Participants of the launch. Photo: UN Women
thresholds (4,979 TRY and 1,518 TRY for a family of four). Poverty significantly increases Syrian women’s vulnerability.

"According to the research, we see that “Circular on Health Services to be offered under Temporary Protection” regulation issued in September 2013 by Prime Ministry of Turkey being highly successful. Syrian women in Turkey appear particularly satisfied with their access to medical services. 86% of women and girls report being able to access free primary health care services. Almost all women said that they were well informed about the general medical services available to them however, it is also found that they are less aware of sexual and reproductive health services," said İbrahim Vurgun Kavlak, General Coordinator of Solidarity with Asylum Seekers and Migrants.

In Gaziantep, UN Women established SADA Women-only Centre, managed in partnership with the International Labor Organization (ILO), SGDD-ASAM and Gaziantep Metropolitan Municipality, with financial support by the European Union (EU) Regional Trust Fund in Response to the Syrian Crisis, the ‘Madad Fund’ and the Government of Japan. The Centre is a unique model that aims to empower women and girls, help them access vocational and livelihood skills and enhance social cohesion.

Turkey has generously been hosting the largest number of Syrians forcibly displaced from their homes due to the conflict in Syria that has been ongoing since 2011. About half of the 3.5 million Syrians who have gained temporary protection in Turkey are women. Women affected by war are at greater risk of being harmed and victimized, of ending up in vulnerable situations and of having fewer opportunities in their country of refuge.

UN Women will continue to work with the government of Turkey, its partners from the civil society, the UN and international organizations, to mainstream gender into the refugee response agenda in Turkey.