From Where I Stand: “I am proud to be the voice of refugee women”

Fatma Elzehra Elabo fled the war in Syria with her family when she was a teenager and moved from her hometown, Halep, to Gaziantep, near Turkey’s southern border. After learning Turkish and finishing high school, she started working as an Arabic-Turkish translator in SADA Women-only Centre, which provides vocational and language skills to refugee and local women in Gaziantep. SADA Centre was established by UN Women; it is run in partnership with the International Labor Organization (ILO), the Association for Solidarity with Asylum Seekers and Migrants (SGDD-ASAM), and Gaziantep Metropolitan Municipality, with financial support by the European Union (EU) Regional Trust Fund in Response to the Syrian Crisis, the ‘Madad Fund’, and the Government of Japan. 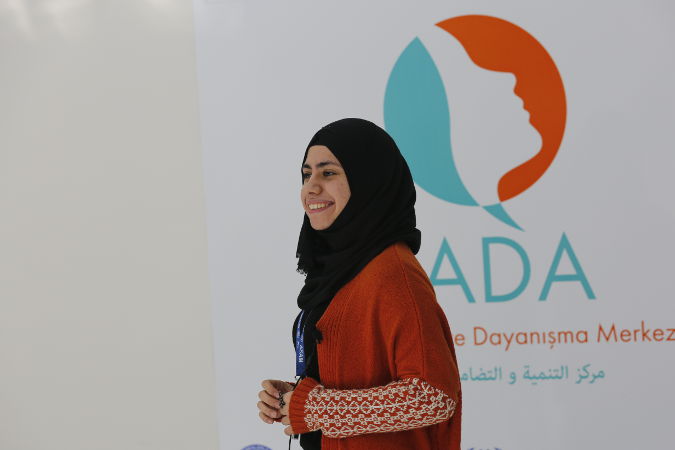 My family and I came to Turkey in 2012 to start a new life. Soon after, I enrolled in a high school in Gaziantep. I was lucky because girls aren’t sent to high school that easily in Halep. I graduated from high school successfully with a 93.14 average score and then improved my Turkish through a language course certification.

I became interested in writing editorials and my articles were published in three different newspapers and magazines in Syria and Turkey. I’m still writing for newspapers and on my blog. I like writing about politics, international affairs and diplomacy, especially related to the Middle East. I also make video blogs about my articles.

I started working as a translator in SADA Women-only Centre in September 2017. Before that, I was working as a volunteer translator for women refugees who escaped the war in Syria just like my family and I did.

In SADA Women-only Centre, there are women coming from different countries, such as Syria, Afghanistan, Jordan, and Iran. I am so happy and proud to be the voice of these women as their translator in the Centre. When I hear and translate these women’s painful and inspiring stories, I feel the importance of my job and when I notice their appreciation, I like my job more and more.”

Close to 1800 women and 800 girls have registered with SADA Women-only Centre so far to benefit from vocational courses, trainings and other counselling services. Recent new funding from the EU Regional Trust Fund in Response to the Syrian Crisis, the ‘Madad Fund’ helps to scale up significantly UN Women’s targeted intervention in Turkey and joins funding from the Government of Japan. It is an important and timely contribution to address women’s empowerment priorities in the context of the Syrian crisis regional response and towards the achievement of the globally agreed Sustainable Development Goals. Ms. Elabo’s story relates to the Sustainable Development Goals on achieving gender equality and the empowerment of all women and girls ( SDG 5), promoting decent work and productive employment for all ( SDG 8), on facilitating safe migration and mobility of people ( SDG 10) and promoting peaceful and inclusive societies for sustainable development ( SDG 16).