During her recent visit to Egypt, the Director of UN Women’s Programme Division, Gülden Türköz-Cosslett, along with the Regional Director for the Arab States, Sameera Al-Tuwaijri, and Giza Governor Ali Abdel Rahman, handed out national ID cards to Egyptian women in the municipality of Giza to showcase the “Citizenship Initiative” Joint Programme.

“We are here to support national efforts for women to participate as full citizens of Egypt,” said Ms. Türköz-Cosslett. “With ID cards, women can access the services provided by the State as well as financial institutions. Without these services, women and girls cannot fully benefit from social, health and economic support or participate actively in society.” 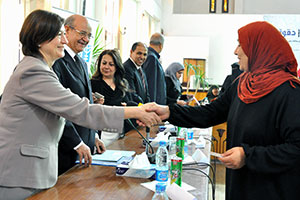 Launched in 2011, the programme to register and issue 2 million ID cards for rural and marginalized women across Egypt over a three-year timeframe is a joint effort of UN Women, the United Nations Development Programme, the Egyptian Ministry of State for Administrative Development (MSAD), the Civil Status Registry of the Ministry of the Interior, the Social Fund for Development, and a number of civil society actors and national bodies.

The Governor of Giza noted that this initiative is crucial as it provides women with the necessary tools to help them participate and seek their basic rights as citizens. In Giza, the programme aims to issue 50,000 ID cards to the most excluded women, identified by a mapping study conducted by MSAD. To date, 42,212 application forms have been collected from all over the governorate and 16,000 national ID cards have been issued.

During her visit, Ms. Türköz-Cosslett accepted on behalf of UN Women an official excellence shield from the Giza Governor, in recognition of UN Women’s efforts to support Egyptian women and the programme on the ground. She also held meetings with high-level authorities, members of Egypt’s civil society advisory board, United Nations partners, and national and international counterparts.

Related News
28/03/2022
In the words of Asmaa Emam: "After receiving my national ID card, now I am able to take effective steps in my life and the lives of my children"
23/03/2022
In the words of Amr Mosaad: "My participation in the family camp on “Gender Transformative Parenting” made me realize the importance and the happiness of being with my family”
23/03/2022
Gender Equality and a Sustainable Planet - We cannot achieve one without the other
10/02/2022
UN Women and Procter & Gamble launch the 3rd Edition of their programme for supporting Women Entrepreneurs in Egypt
01/02/2022
Call for proposals: Women’s Peace and Humanitarian Fund
END_OF_DOCUMENT_TOKEN_TO_BE_REPLACED